Just adding a bit more information about the Nikon V1.  I did not get it wet.  I did take it to our first Annual Rollingwood Pool Masters Swim Meet this morning to catch some photos of people swimming fast.  Yesterday's post contained photos that were all shot using the basic 10-30mm kit lens.  Today, all the images were shot with the little telephoto lens, 30-110mm.  Now, if someone tells you that these lenses are too big I'm here to tell you that person has been off their meds for too long.  Both lenses are in the size ballpark of the Olympus Pen lenses, for equivalent focal length ranges, and at least one quarter the size of lenses with similar angles of view offered in APS-C camera systems and full frame camera systems.  Tiny.  Really.  There is one lens, which I do not own, that ranges from 10mm-100mm and it's big but it's pretty much a specialty lens for video.  It's still not overly large for what it offers..... 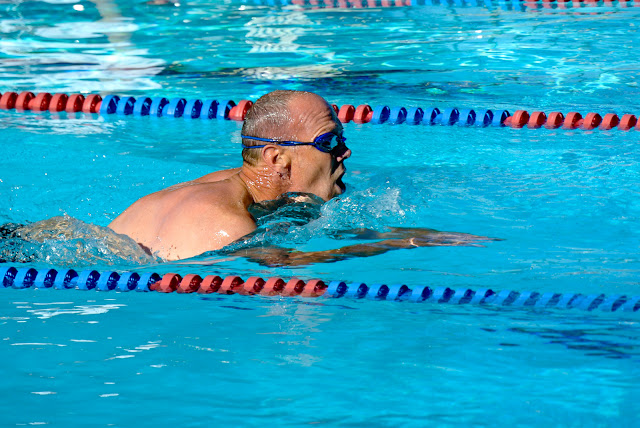 So I stuck the lens on, set the camera for auto ISO (between 100-400), the camera on A for aperture and I was using the mechanical shutter in the continuous mode which gives the camera operator about 5fps for what seems like an unlimited number of frames.  I could have used the silent, electronic shutter at 60fps but it reduces the file size and is vulnerable to the "jello" effect that can be seen on DSLR's that shoot video.  I mostly used the lens at its widest aperture and let the camera compensate with shutter speed and ISO shift.  I used the matrix mode for metering and never touched the exposure compensation dial. 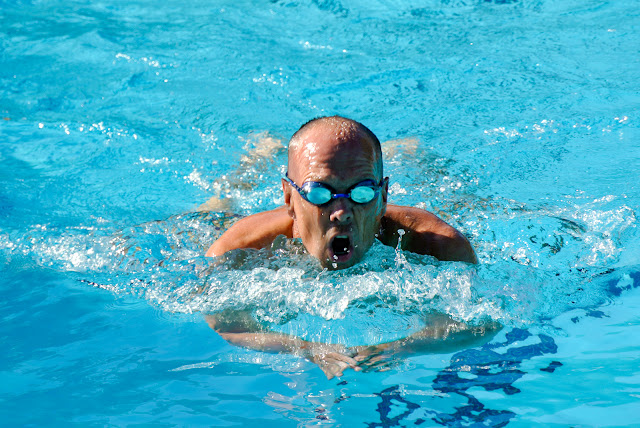 The camera locks focus quickly and very rarely hunts.  Certainly less so than my Canon 5Dmk2.  While the camera is fast on frame to frame performance the shutter has a bit of lag and I found myself having to make some big adjustments in timing compared to using my Canon 1Dmk2N for shooting swimming.  On my first tries I was missing the peak of action by 40 or 50 milliseconds.  Once I learned to predict the moment my keeper rate rose. 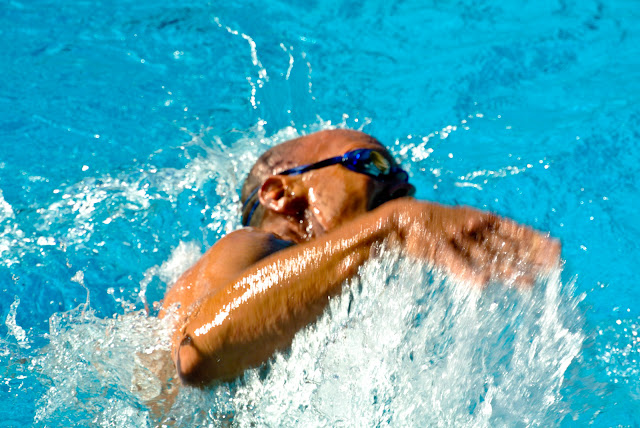 I haven't shot RAW yet because I'm not sure if I have my hands on conversion software to make the files work in Lightroom or PhotoShop CS5.  The Jpeg files are the "fine" setting and there is very little to select in terms of fine tuning.  In fact I can't find any sub-menus to change things like contrast, saturation and sharpness.  What squirts out of the camera and into Lightroom are files that are very well exposed but somewhat low contrast vis-a-vis the Olympus files I'm used to. (And with the Olympus cameras there much be 813,000 possible setting combinations for the Jpegs.....).  Since the files are nice and flat they accept a good amount of nudging without going nuts.  I pull up the blacks by about ten percent in levels, add a bit of contrast with curves and push up the vibrance control in Lightroom about 10 points.  I'll keep hunting for more user controls but I have a sneaking suspicion that, once all the Adobe products are updated with the latest raw information,  I'll shoot this camera as a raw machine. 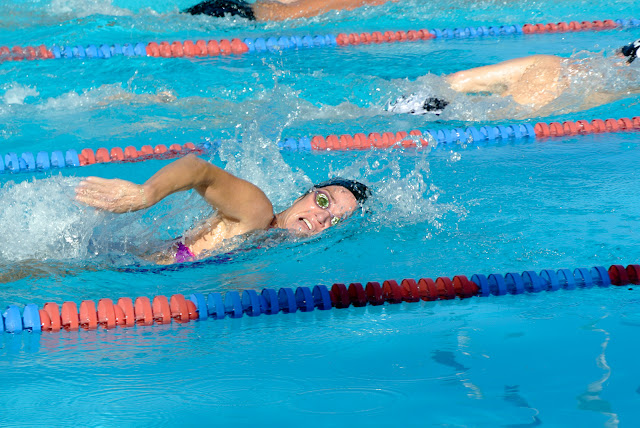 The thing you notice after your first hour with the camera is just how light and small the rig is compared to our traditional cameras.  And how deep the buffer is.  You can shoot and shoot and you'll never wait for the camera to catch up. 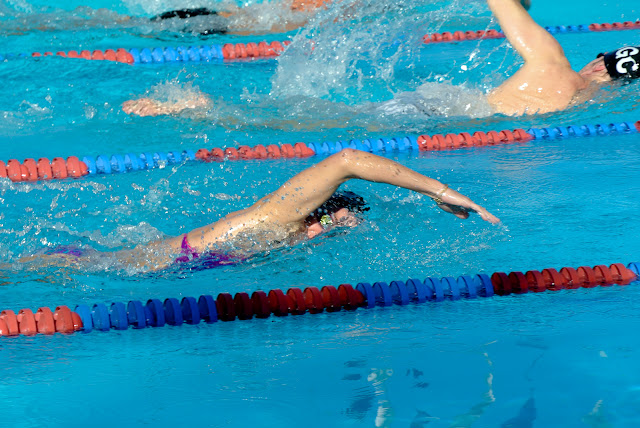 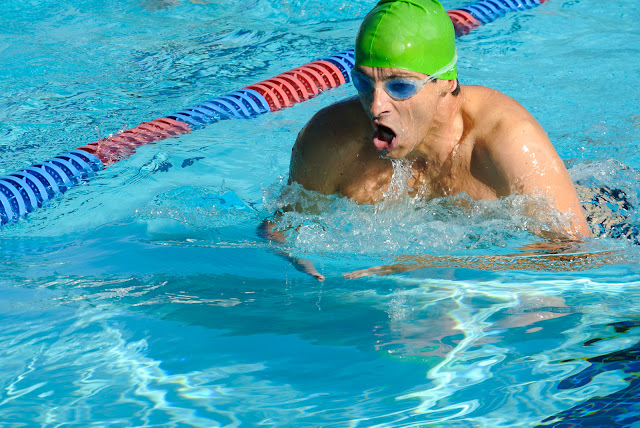 I haven't played around with some of the more modern settings like the one that shoots ultra fast and then presents you with the "best" four frames.  But I'm happy with the files I'm getting from the more pedestrian settings.  A quick aside not related to capturing swimming:  If you set the camera to electronic shutter and turn off the sound effects in the menu the camera becomes absolutely silent when shooting.  There is no "click," no mirror slap noise, no fake motor drive noise, nothing.  The perfect courtroom camera if Nikon decides to come out with a few fast primes. 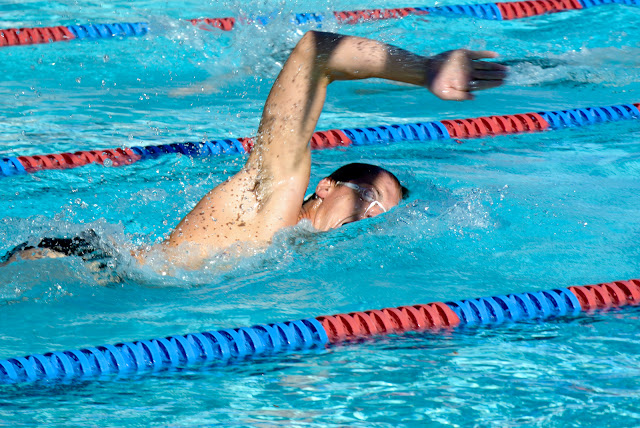 This is coach Chris.  He was an All American at UT Austin.  He stood up on a sleepy Sunday morning and banged out a 1:45 200 free.  I thought that was amazing.  Loving the shadows from the backstroke flags.... 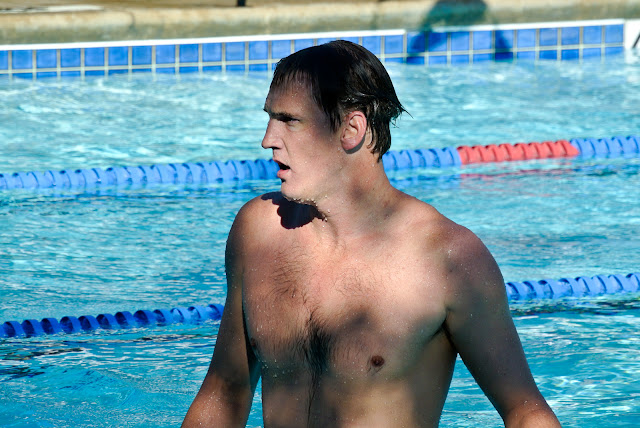 I love the way the meter locks in and handles dappled sunlight. 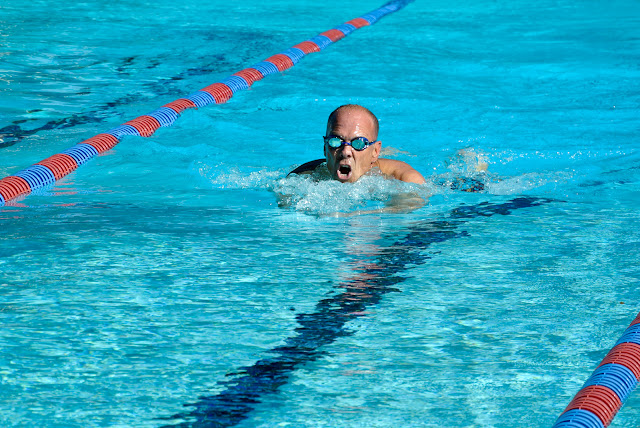 Once I got the lag time figured out I was able to pretty consistently catch the moments I had in mind. 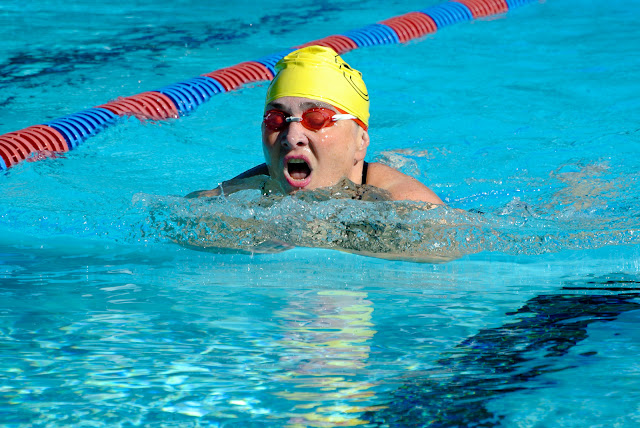 I shot 484 frames this morning, in between my volunteer duties of timing and counting laps for a swimmer in a distance event. (And coffee drinking.  And bagel consumption.)  The camera meter (which reads out in percentages) showed that I still had an 80% charge left.  Not bad at all.  I may go against twenty years of tradition and NOT buy a second battery..... 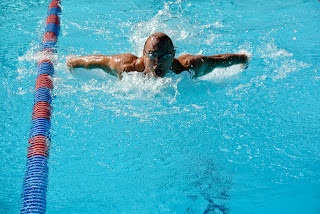 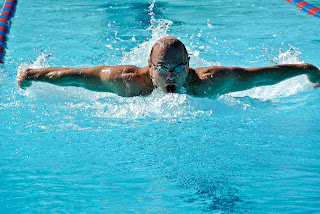 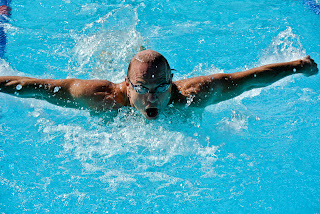 The three frames above are a sequence and it was easy to capture once you get the cadence of the camera down.  I need to figure out how to turn off the instant review function if I'm going to use the camera for serious work.  David's a darn good 200 butterfly swimmer.  I think that beats having a cool camera any day of the week. 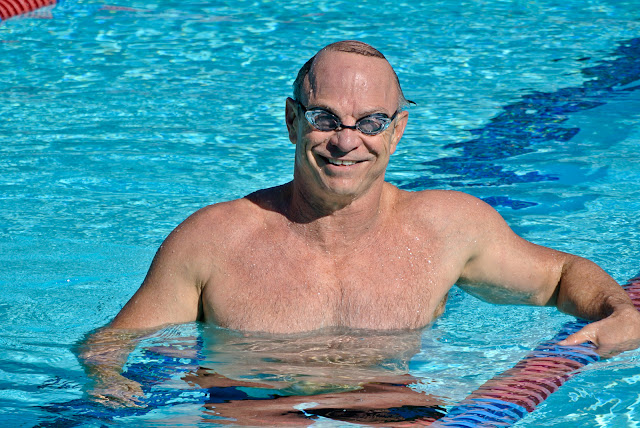 All in all I think the lens performs very well and the camera does a good job focusing it.  I'm pretty impressed for an optic that gives me roughly the same field of view as a 90 to 300mm zoom on a full frame camera and costs only $249 WITH BUILT IMAGE STABILIZATION.
I've read a bunch of comments on the web about these new cameras and it's amazing (and depressing).  According to the "experts" this camera can't do much.  And what it can do they suspect it can't do well.  If you really want to know what a camera can do take one out and shoot some images with it.  Because, as they say on the web, "Your Mileage May Vary."
The smartest thing Nikon could do is to run program where people can come into a store and borrow a camera and lens package for 24 hours with no strings attached.  I think they'd have a hard time getting them back out of people's hands.
Note to the highly literal and people with "JTCD" (jumping to conclusions disorder):  Just because I like this camera doesn't mean I think all other cameras are bad, deficient, unusable, etc.  Nor does it mean that I'm putting all of my other cameras in a box and heading down to Goodwill to donate them.  It does mean I'll be shooting with it for a while to see what I can squeeze out of it.  And then I'll turn on the video and squeeze some more.  This doesn't mean that anyone else has to like it.  Really.
Posted by Kirk Tuck, Photographer/Writer at 14:12 19 comments: