A production photo from "The Very Hungry Caterpillar" at Zach Theatre, in Austin,Texas. Taken with.....a camera. 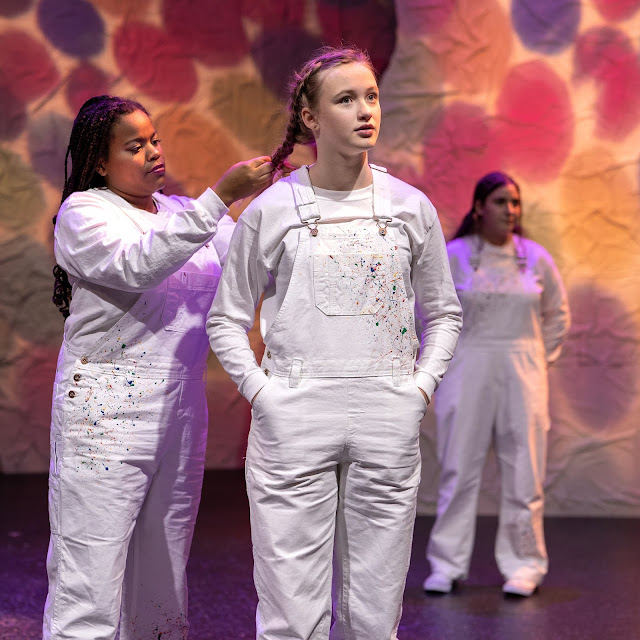 I miss all those great actors and all the great crew that put together such wonderful productions at Zach Theatre. This is a moment before the doors opened to let in the audience for, "The Very Hungry Caterpillar." I hope we're all back in our seats again soon, watching magic unfold right in front of our eyes...
Posted by Kirk, Photographer/Writer at 21:47 No comments:

Yeah. We always brought our cameras to coffee. We still do. At least I still do. Loved the Rollei. Hated the batteries... Loved the lenses.
Posted by Kirk, Photographer/Writer at 21:36 3 comments:

A portrait of Neely over at the old studio on San Marcos St. 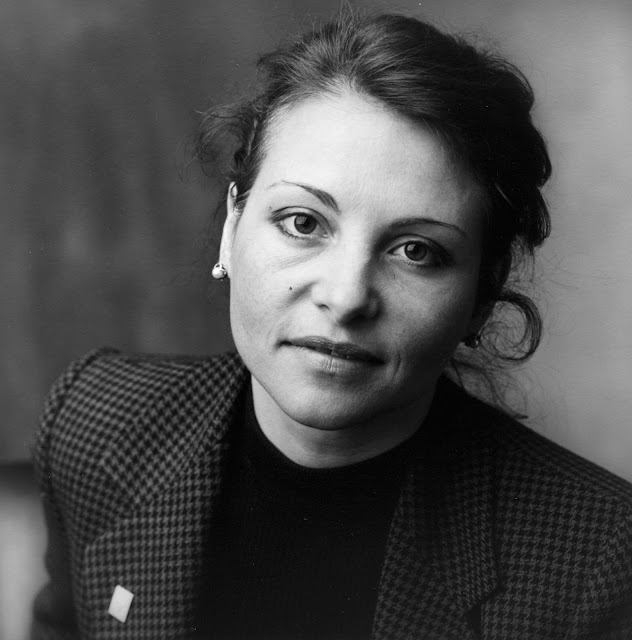 Posted by Kirk, Photographer/Writer at 21:32 No comments:

It's Sunday and I'm about to start printing. Who would have guessed? 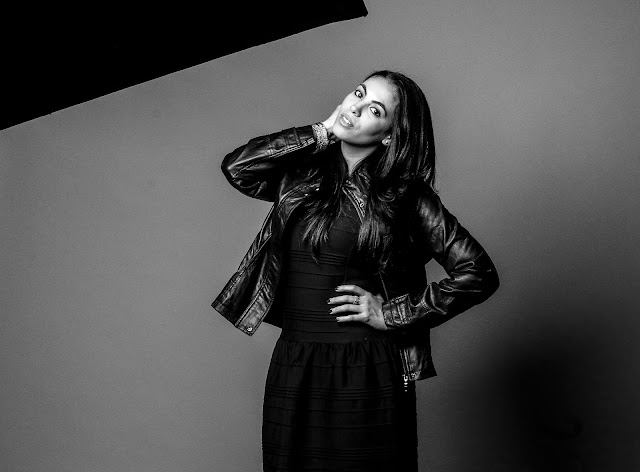 I've got a backlog of printing to do but none of it has anything to do with commercial photography. Nope. I wanted to make some prints of my late dog, Tulip, so I've been going through thousands and thousands of family image files looking for photographs ranging from puppyhood to sparky oldster. I have lots and lots of digital files but never got around to actually making prints. That's something I thought I'd do if I retired and had some downtime...

I'm not retiring yet but there's nothing I can do, photographically, for the business right now and, from a marketing point of view I'm trying to keep my advertising budget "powder" dry until I can see the path to recovery appear. Why advertise when no one is even thinking of buying?

But what this enforced stoppage of business has delivered is plenty of time to get my family files in good shape, take a few laps around PhotoShop and Luminar 4.1, and get some printing done. And, in the process of memorializing Studio Dog, I've also found little treasure caches of Ben and Belinda images that have never been printed or even post processed well. When you are a busy-busy everything not tied to a job gets pushed forward to a vague time in the future; which generally means --- never.

I bought extra ink yesterday for my Canon Pro-100 printer. A printer that's about ten years old and still functioning well enough to kick out decent prints. I know there are much better printers on the market but printing has been such a low priority for me over the last ten years that I haven't even looked around to see what's available. If I find emotional success from my current printing jag and I find a project that just screams out for prints then I'll start researching in earnest. As a percentage of the overall budget printers are pretty cost effective; especially if you consider a 10 year + replacement cycle...

I've decided to use Canon's Photo Paper Pro Lustre for the moment. I'm sure there are wonderful art papers from a number of companies that I don't even know about but this is functional and the printer profiles for it are embedded in the system. My first tests look just fine. As with cameras I'm coming to suspect that the qualities of individual printers are very much secondary to having something interesting to print.

I'm happy to report that Precision Camera in Austin, Texas is still quasi-open for business. No one is allowed into the store so you have to go online to look for specific items and see if they are in their inventory. Once you've found what you need you have the option of ordering online or, if you are local and want to get your hands on your purchase today, calling them up on the phone and transacting that way. It used to be convenient and quick to order some things on Amazon but now that all shipping priorities go to delivering groceries and essential products I'm finding the stated delivery time for photographic items is stretching out to infinity. (I ordered a  Leica R to L-mount lens adapter about a week ago and the stated delivery date --- and only shipping option available --- was April 28th. And that's a product that's fulfilled by Amazon...). If I want to wait I guess I can stick with Amazon but if I want to use something right now I'm thrilled to still have a local merchant.

Anyway, I ordered a box of 50 sheets of 13 by 19 inch paper as well as a box of 8.5 by 11 inch paper (on which to run tests) and a complete set of inks plus some extra black ink. I gave them my credit card information and requested that I do a curbside pick-up. Half an hour later I was sitting in front of the store calling on my phone. My sales person came out with a bag filled with the products. He was wearing a mask and gloves. He put my purchases on a table just outside the door and when he re-entered the store I got out of the car, sprayed the package with alcohol and took it back to the car.

When I got home I wiped down the packages inside the bag. Now I'm ready to print...

Exercise notes: We're very fortunate to live in a long established, west Austin neighborhood complete with wide suburban streets, loads challenging hills and lots of towering trees. Since there are no "cut through" streets we have absolutely no traffic through the neighborhood other than local people going to the grocery stores. We've also been here for nearly 23 years and know most of our neighbors quite well.

Every morning Belinda and I pick from three or four routes which are mostly about 2.5 to 3.0 miles total and include at least one vicious and unkindly steep hill, and several long, leisurely inclines. When I saw "leisurely incline" I mean a half mile of ten to fifteen percent grades. You will be huffing and puffing a bit to get to the crest, if you are walking briskly enough. We walk now measured by time instead of just distance and we generally allocate an hour to our morning walks.

Afterwards Belinda practices yoga and is now watching and following along on one of the many yoga programs offered free on Amazon Prime Video. They range in difficulty from workouts aimed at leisurely stretching to tougher, "sweaty" yoga aerobics. During yoga time I tend to do my regular "dryland" exercises and stretches. Some crunches, some push-ups, as much planking as it takes to get through five or six classic rock songs on my phone. Then it's time for breakfast and chores.

At some point in the afternoons I had been going to the hike-and-bike trail that runs along the river which flows through central downtown to get in either a 4 or 5 mile run but that's on hold now. They closed all parks thru the holiday weekend and there's a rumor that the parks might stay closed for the rest of the "stay at home" order. Which might cause an insurrection. One in which I am almost certain to participate.... At some point there has to be a calculus as to whether or not life is worth living if confined solely to the most boring and mundane existence. I get the concept of flattening the curve but really, running the trails? Absurd.

Sometimes, when we feel we've seen everything good on Amazon Prime and Netflix we just do another long, slower walk through the neighborhood after dinner.

A note on buying and selling gear right now: I've bought a few small camera oriented things during this time of isolation but nothing big or earth-shattering. I bought a nice, used Panasonic GX8 for $350 and a Leica R 90mm Elmarit for $300. That's pretty much it. But I keep watching the market and reading blogs in which people write about selling off gear. I can't help but make a connection to the stock market and wondering why these sellers waited until everyone was afraid to spend money to sell, or more precisely, offer... their gear for sale. It's a classic "buy high/sell low" proposition right now. I guess it makes sense for people who might be feeling like they need the cash in the moment but it might make better economic sense to wait until the smoke clears and the all clear sirens sound before divesting of the good stuff.

I've been waiting to buy a Leica SL, which I may or may not do, depending on whether the metaphoric P/E ratio for those used cameras falls into a range that I find attractive. At some point every used Leica SL in inventory could be converted to a rent payment by a merchant. That's the calculus that makes sense for buyers. But for sellers? If you have the ability you might want to hold tight. Besides, by removing attractive venues in which buyers can actually use the lens or camera the situation at hand effectively removes most of the motivation for buying in the first place. Right?

So I am continually amazed when someone announces that they are putting (very good) lens X on the market right now. Put it back on the shelf and try selling it when the country is open for business.

On Writing: Several people have expressed surprise that I am able to write so often and so much (which also sounds a bit like a critique....but I pay myself by the letter...NOT), and on a daily or near daily basis. They conjecture that I either spend hours and hours a day on a post or that I am speaking as fast as I can into a speech dictation program (which also edits and spell checks on the fly).

Neither of these things is correct. I spend no more than 45 minutes to an hour on any one post. I used to write more when I was doing camera reviews but we don't do that so much now. So, from the time I grabbed my red cup of coffee and started typing; to this point today, the total time elapsed is 48 minutes.

People who write more slowly usually make the mistake of endlessly revising. That might be great for the creation of a novel but it's overkill for a daily blog. The other impediment is over-research syndrome. A blog isn't meant to be the authoritative text about a subject but more of an overview. I know some people who over-research for days and still only end up with a paragraph or two. And generally too many facts get in the way of reading. Get your big facts straight and stay out of the woods with the minutia.

Writing quickly comes solely from practice. Daily practice. I've written some 4,460 blog posts in the past ten years, actually hundreds more if you count the ones I hated and took down or decided were too inflammatory...  I've also moderated nearly 70,000 comments; mostly positive and happy, but some accompanied by seething and senseless rage fomented because someone might like a different camera brand better....

But like running, swimming and photographing, writing is a discipline in which the practitioner gets faster and (hopefully) better the more they do it, and the more often they practice it. It helps to read other blogs in the subject field to see what resonates in their work and what doesn't work at all. Keeps me from re-inventing another "Pontiac Aztec."

Now, off the printing races. Praying for no ink clogs....


Posted by Kirk, Photographer/Writer at 12:36 8 comments: