Which camera maker will be the first one to incorporate graphene super capacitors instead of traditional batteries? And other random, industry-centric thoughts.

With all the bubbling, frenetic attention we've been paying to camera introductions I think we missed, almost entirely, the latest news about graphene super capacitors. Researchers have found new ways to work with graphene distribution and to incorporate it into super capacitor manufacturing. What would this mean for cameras? Much faster charging cycles (by a factor of 10X?), much higher current handling and thousands more charge and discharge cycles than we currently get from lithium batteries. The downside? The graphene super capacitors are still mostly lab proof of concept examples right now. But in five years......? They might just be the next portable power source...

I predict that in five and one half years every high end, mirrorless camera will feature this new technology and then battery life will largely cease to be an issue.....

My 2010 prediction that we would abandon optical viewfinders in favor of EVFs is coming true in front of our eyes. Gosh! Was that series of predictions really eight years ago?

We are at an inflection point with expensive cameras. Hasselblad and Fuji medium format cameras made the leap to the EVF future and now Canon and Nikon are following along after Sony. If Nikon's foray into the Z universe is successful (and pre-sales indicate that it will be...) I can't imagine that higher spec pro units aren't just ahead, from everyone.

This will be, on a smaller scale, reminiscent of the switch from film cameras to digital cameras. Pundits predicted the film-to-digital switch would take twenty years for the transition but the majority of adopters had new digital cameras in their hands in the space of two years. The transition to mass market mirrorless will be equally quick and decisive. In the short run Nikon, Canon and other new arrivals will benefit from sales resulting from full system replacements and pent up demands from Canon and Nikon users for mirrorless tech.

CF cards are almost completely dead and I can't think of a single camera maker who is introducing a new product with a CF card as part of the design/feature set. If you plan to keep your D700's and other CF hungry cameras around for decades to come you may want to start salting away lots of current, state of the art CF cards to fill the void that WILL be created by the mass exodus from the market by card makers.

But don't get too comfy with SD cards, even the UHS-II cards might be nearing a tragic end-of-life, being displaced by QXD cards that offer a more robust package and better performance. Oh gosh! All this change is so.....disquieting.

Electronic flash that plugs into the wall is on the way out. Oh, people will still want powerful flashes that can slam light through soft boxes, and go toe-to-toe with the sun, but they're quickly becoming comfortable with battery-powered units and the convenience of not having to carry extension cords or find electrical outlets will carry the day and all the money we've sunk into A/C powered Profoto units, Elinchrom units and other pricy brands will haunt us as we source supremely cost effective new units with lightweight battery packs that go on forever and ever. Until those, in turn, are replaced by graphene  super capacitor energy source packing lights.

It's all so quick and zany. Sometimes the rush of progress makes me want to rush to the camera store, buy bricks and bricks of medium format Tri-X film for the old Hasselblad and re-purchase another enlarger. I hear they are going cheap these days...at least on the used market.

Just a few thoughts for a cloudy, humid and scowling Sunday afternoon.

And, yes, my visit to San Antonio was fun and happy. Dad is doing very well. 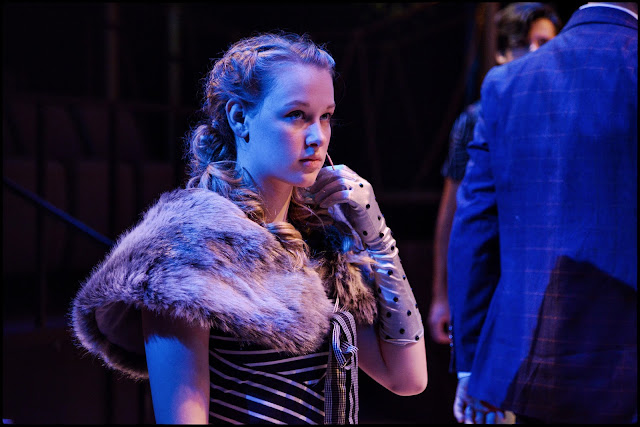 From the set of "Tortoise and the Hare" at Zach Theatre. Post rehearsal.