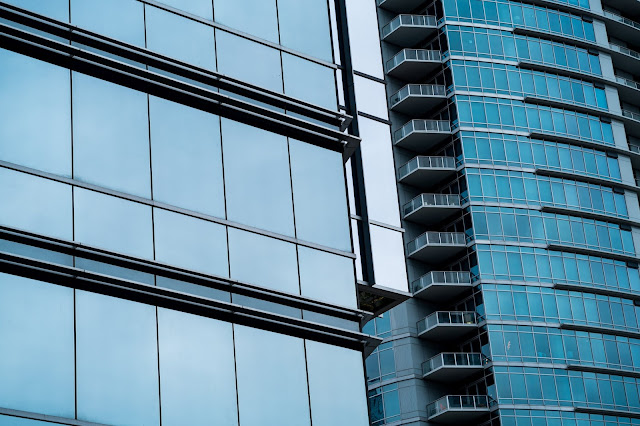 Yes. I think the 90mm Elmarit is pretty sharp. I mostly shoot with it at f4.0 or f5.6 but even wide open it's more than prickly enough to make nice portraits. Between f5.6 and f8.0 it's as sharp as I would want in a lens. The adapter that fits it onto the camera is "dumb" but the camera has a bunch of lens profiles for the M and the R series lenses. When you stick a lens on the camera and select a lens profile the act of programming in the exact model of lens tells the camera a lot. There's also an external exposure sensor  on the camera that adds information to the mix and "guesses" the aperture at which the lens is being used.  Nice. The 90mm Elmarit is dense and a simpler lens formulation than current lenses but that also keeps it relatively small; even with the adapter attached. 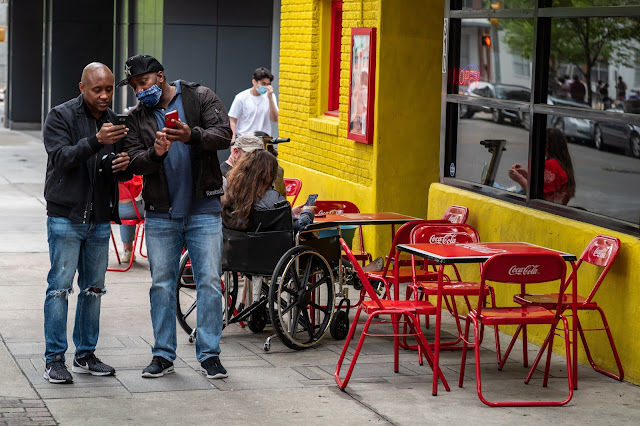 After a year of relatively severe isolation, and many lone walks on empty streets, I'm finding that it takes some practice to feel comfortable photographing strangers again. As more and more people come out and walk around it feels increasingly natural to carry and use a camera on the street. Earlier in the year there were so few people in the downtown area that a "camera person" stood out like a sore thumb. The sweet spot will come when enough people are vaccinated and we don't have to wear masks out on the street. Then we can smile at other people more convincingly and invite them to be photographed in a more carefree way.
I'm trying to work fast with manual focusing lenses and with something like the 90mm that means taking advantage of the really good focus peaking in the two Leica cameras. 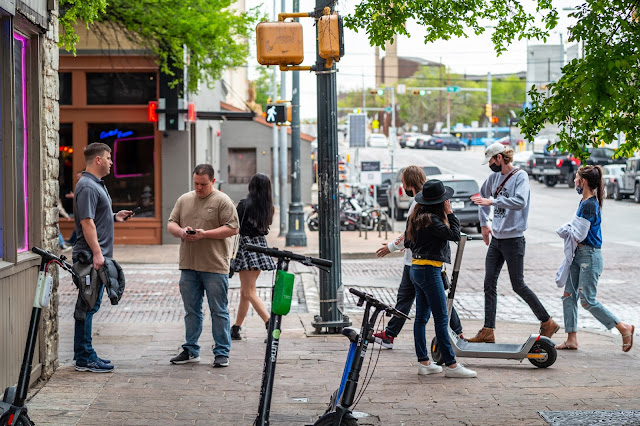 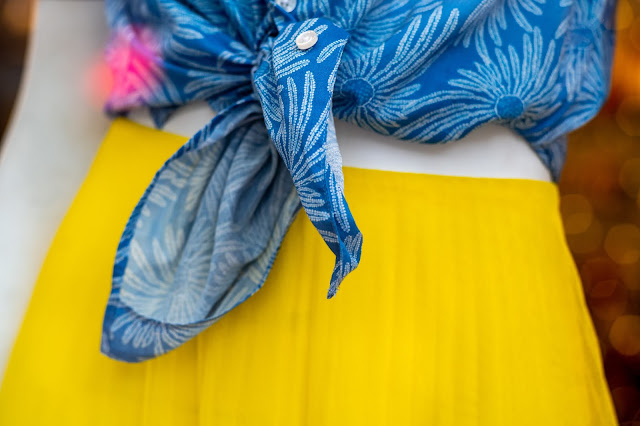 Lost to the smaller size on Blogger is the fine detail of the weave of the fabric in the blue blouse. And the rough edges of the bokeh "balls" in the background, to the right of the frame... 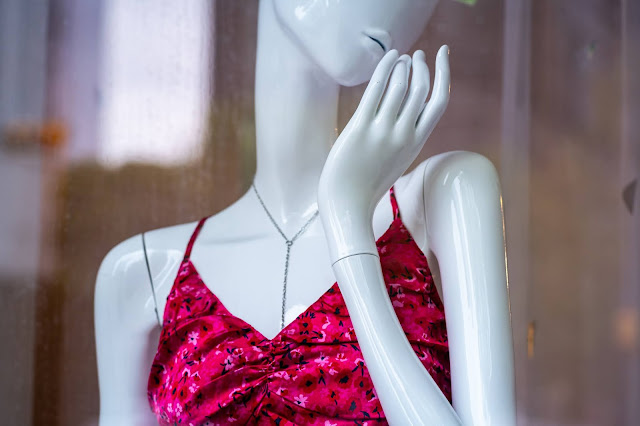 My favorite 2nd Street mannequin has abandoned her furry hat and her sweatshirt and embraced a more Spring oriented outfit. I like the way the 90mm "describes" the plastic of the arms and hand. 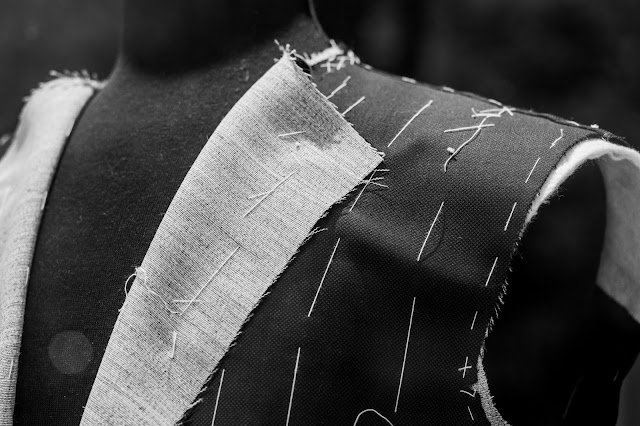 I don't need a new suit. I have a closet full and most never get worn. But I've walked by a shop called, "League of Rebels" hundreds of times and watched their master tailor, through the shop window, as he crafts custom suits for their customers. I think I'd like to drag Ben over and have a suit made for him. He'll resist but I think everyone in any business needs at least one well tailored suit and a handful of good accessories. Custom shirts, handmade belts, and, of course, really good shoes. But alas, this might just be a generational prejudice.
Again, the actual image of the tailoring in progress, in its full glory, is just stuffed with sharp, rich details that are lost here. The 90mm Elmarit is a very capable, longer focal length, street lens. Equally at home on both the Panasonic and the Leica camera bodies. 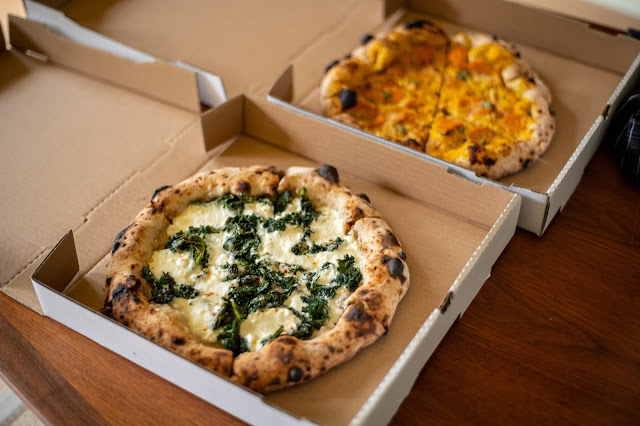 On Saturday I drove to Dripping Springs to catch up with my restauranteur friend, Emmett. Whenever you hang out with a chef I'm pretty sure you're going to end up someplace new, eating something interesting; and sometimes tasting stuff that's great. We met at his house and then hopped in his car and slipped across HWY 290 onto a winding, rural road and traveled deep into ranch country until we came to a dirt entryway into an new, industrial looking complex that is home to a distillery, a bake shop (bakery) and a flour milling operation.
Our destination was Abby Jane Bakeshop. It's a decidedly high end bakery, owned and run by a former pastry chef who trained at some very well respected restaurants and, judging by the large number of customers who navigated the long and secretive route to get there, a pastry chef with a following...
Since I was with an avowed, professional foodie I stood by and watched as he ordered one of everything. I ate a $5 chocolate croissant that was pretty amazing. Monkey bread with a delicate white cheese and sautéed onion component that was instantly addictive. A plain croissant that was about as good as my favorite version from Fauchon. We ordered good coffee and then ordered two pizzas to go.
We ordered the wood fired, Greens and Parmesan Cream pizza and the Carrot Curry pizza and both were delicious. We took these home to share with Emmett's wife, Lisa. We also grabbed a few loafs of bread that were equalled good. All made with organic, fresh milled flours.
After lunch Emmett boxed up the left over pizza and sent it home with me. There were several pieces of the "greens" pizza left so Ben and I heated them up in the oven this morning, topped each slice with an over-easy egg and had them for breakfast. Ahhhhhh. 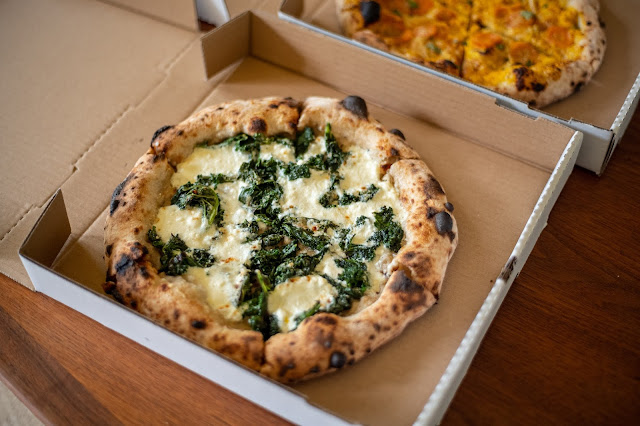 I wish we had a satellite version of Abby Jane Bakeshop here in the west Austin neighborhood but I fear it's one of those businesses that works under the eagle eye of an impassioned owner but isn't infinitely scalable or portable...
I didn't sample their cakes but..... cake! scroll down in the link to see some great cakes... 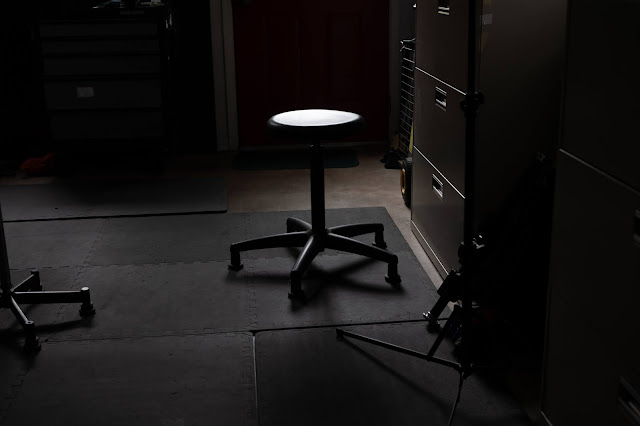 When I sat down to play with files this afternoon in noticed this "throw away" shot taken in the studio. I shot it because in the moment I loved the isolation of the black stool top reflecting to white as it caught the light from outside. I just wanted to see what it would look like.
But once I saw it I started wondering how "recoverable" the shadows might be from the SL. So I opened the file in Lightroom and started playing with the sliders. It was shot at ISO400 and I think it's pretty good with the shadows recovered. Just a little experiment. (see below). 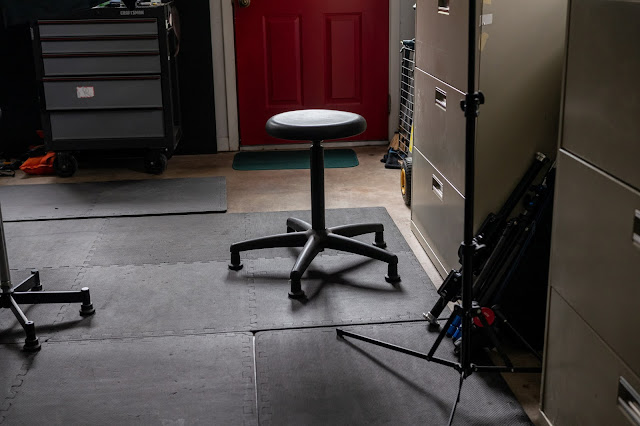 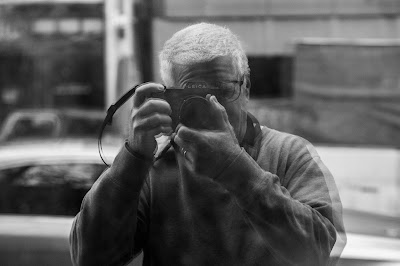 And then there is the routine reflection shot.
Nice haircut.
Posted by Kirk, Photographer/Writer at 17:05 5 comments: