A couple of weeks ago I went to San Antonio to shoot a sky line. At dusk. 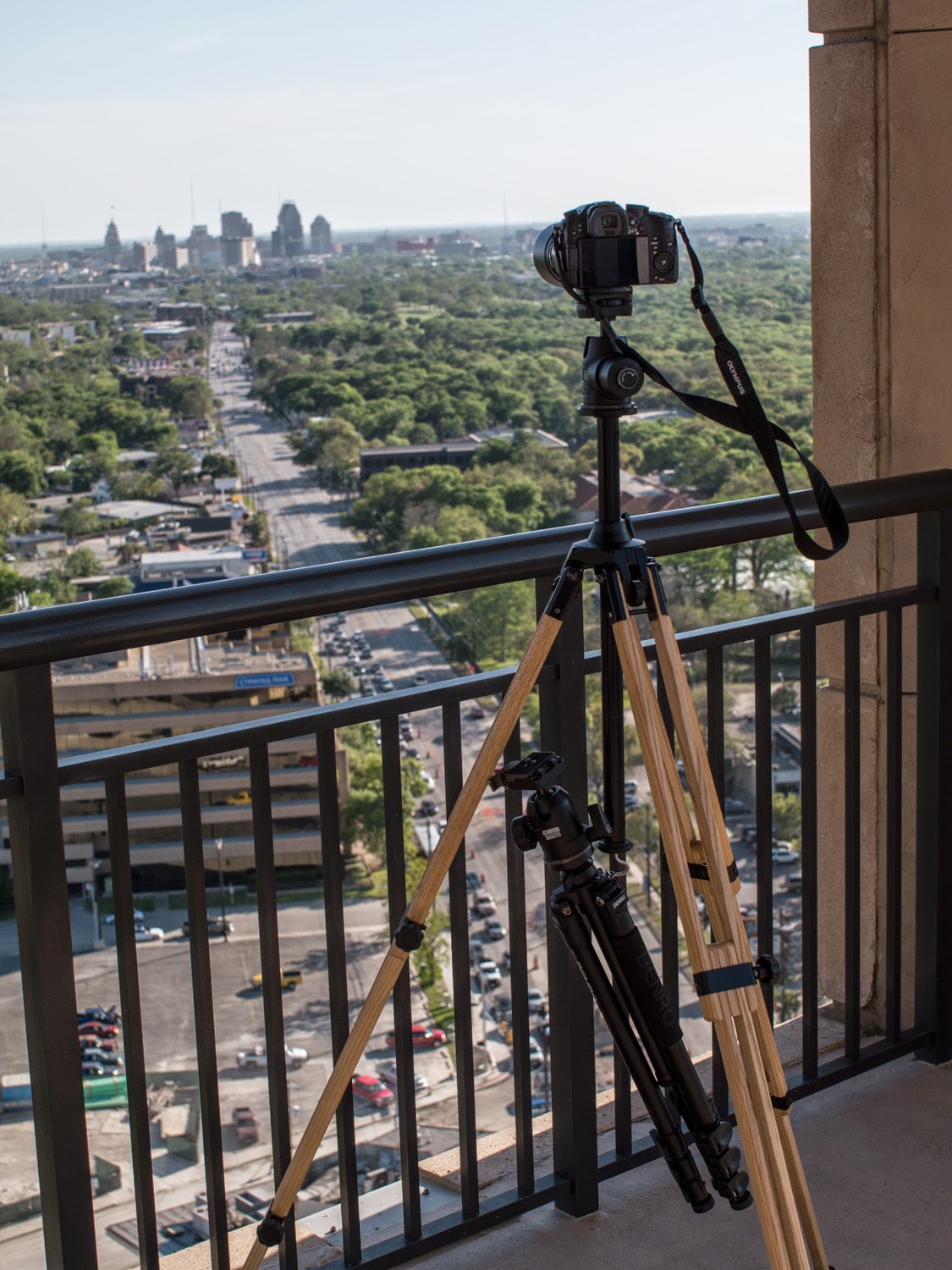 I'm making a transition. No big news for regular readers---I tend to be moving from one thing to the next more often than I'm standing still. This year the studio has seen a couple of big jobs come through. One was very traditional: lots of products and people, shot on white. Traditional advertising client, which means: Do it the way we've always done it. I showed up with the full frame stuff and cases of flash equipment and tubes full of light stands. We worked hard and long and then spent days in post processing. The end result was dozens and dozens of well lit, well composed images that will never find their way into my portfolio or onto my website.

The other job was strictly video. Lots of planning, production, writing, directing, some travel, some really fun interviews, some time in post production picking music for the music bed, and working with a designer to produce custom animated screen graphics. Then into the editing process to pull everything together into a nice, tidy package. Guess which job was the most fun! No contest. It was the video.

When I sat back at the end and really meditated on the two jobs I decided that I want all future jobs to be made up of stuff we couldn't even do five years ago. I wanted to break with the past and be free of the intellectual restraints that come from ossified beliefs. I want to use tools that can provide layers of flexibility and not just brute strength megapixels. I want to mix it up with shots that move and shots that don't.

I shot the traditional job with a traditional camera. And I shot it in a traditional way. The camera was a full framer and I actually spent a couple hours the night before the shoot calibrating it with the lenses I would be using because traditional OVF cameras have a tendency to front and back focus with alarming regularity. I didn't have the time or patience to deal with a job fouled by a fundamental gear issue. When I finished the job and I finished processing the huge files (big because the client "may" use them larger in the future even though current use is web res.....) I felt as though I was finished. Finished carrying around a backward looking set of tools and preconceptions. I know smaller camera formats can deliver the images I want to make. And I know that any camera I pick up now needs to be able to effortlessly glide from solid still imaging to full motion mojo.

This was the time frame in which the GH4 was announced and the specs leaked far and wide. I was optimistic about the camera because I have had nothing but good experiences with its ancestor, the  GH3. I determined to get ready for the next transition and began selling off my remaining Sony cameras and lenses and buying up the few premium Panasonic lenses that I felt would be indispensable if I was to use the Panasonic cameras as my primary professional tool set. Those lenses would be the 12-35mm 2.8X and the 35-100mm 2.8X.  I also picked up the 30mm  and 60mm Sigma dn lenses which have proven to be exquisitely sharp.

The job in San Antonio was my first "no safety net" job. I needed to shoot some portraits in one venue and a dusk skyline in another venue and I only brought along the GH3s and the four above mentioned lenses. They worked perfectly. The cameras delivered good, solid, highly detailed files and the lenses were as good as their reputations made them out to be. The 60mm Sigma made a perfect portrait lens and the 35-100mm gave me plenty of options when shooting the city skyline several miles south and 21 stories below my little perch at the penthouse of the Broadway Residences tower. 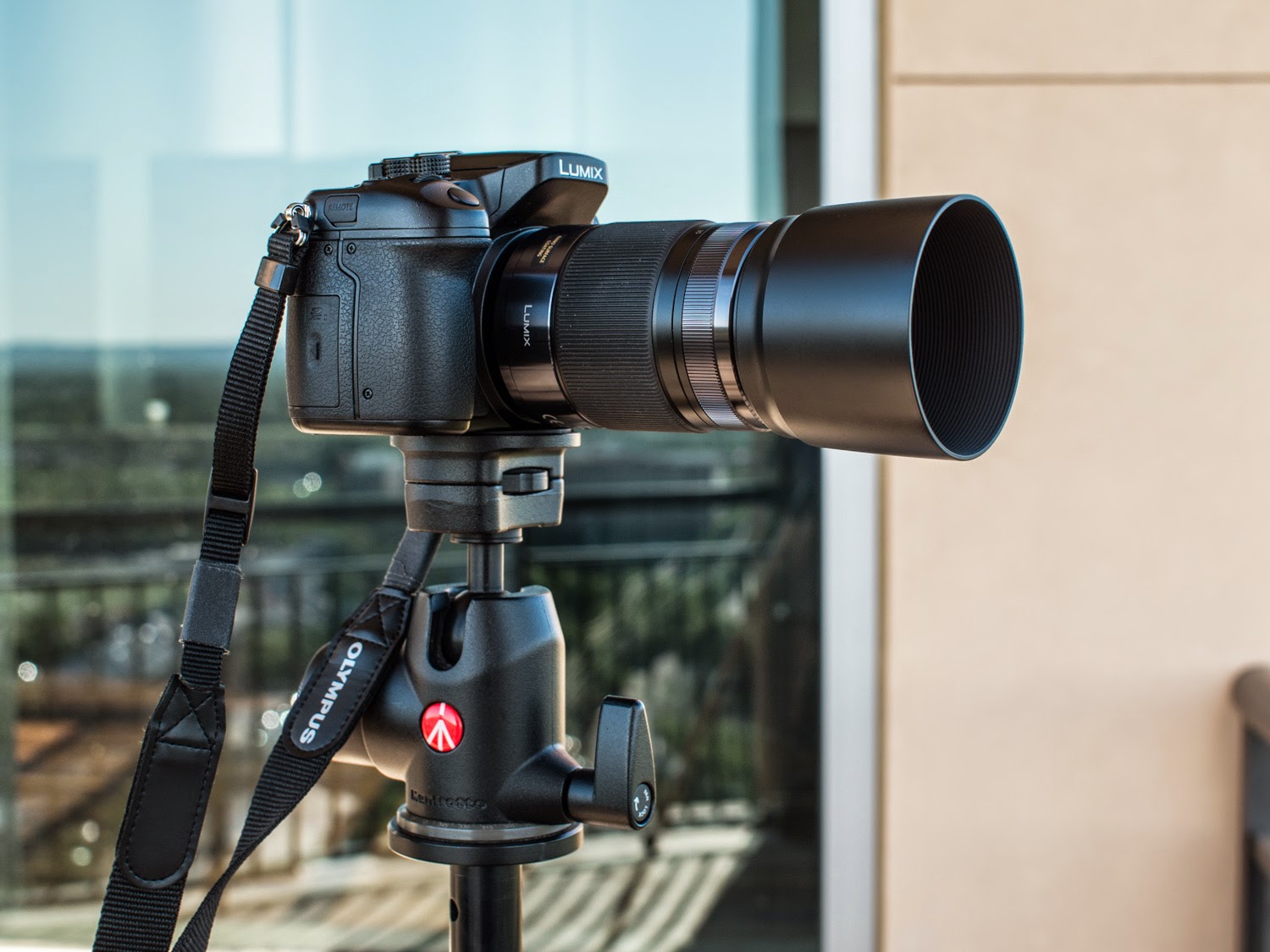 With that still job, a big video project and lots of other, smaller photography projects "in the can" I decided to go ahead and commit on a GH4 and to rid myself of a bunch of other stuff that hung around the studio, vying for my attention. My mental bandwidth.

The markets have all changed. The tools are all different. I want to be shooting motion as often as I can and I get better at it with every encounter. (Back to the old idea of spending time in the water.)
In the end I couldn't bear to get rid of the GH3 cameras. They are too new and too good to let go of. Their still imaging performance is within a gnat's whisker of the GH4's still performance and I love the idea of shooting a lifestyle job for my museum client with three lightweight but powerful cameras hanging off my neck and shoulders. The zooms on the two GH3s and something like the 25mm Summilux or the 42.5 mm Nocticron hanging off the front of the GH4. Thirty-two gigabyte cards in all three and no slowing down to make equipment changes.

I also like the idea of shooting video interviews and narrative scenes with three time-code sync'd video cameras, each at a different angle, each with the different focal length and each getting me a different look. It's wonderful in editing to have so many cutaways from one interview of long scene. And to have all the colors and tonalities match between them.

I'm down to the lowest number of cameras I've owned since my days at the advertising agency back in the 1980's. Three Panasonics. One old Sony a850 (to appease my friend, Will, who insists that every pro have at least one full frame camera somewhere to default to). One perfect Sony RX10 and one old and cherished Sony R1. That's it for the stuff I own. I do have a couple of Samsung cameras, the Galaxy NX and the NX30, as well as four of their lenses but those are subject to return at any time...

I took the batteries out of the big Sony and the Sony R1 so I could store them safely. They are out of rotation. Out of the mix. It's really down to the Panasonics and the RX10. A conflict between the workman's perfectly sorted kit and the (inner) dilettante's favorite one perfect camera.

When I put the Panasonics (I hate calling them "pannys") in a camera bag and go out I am warmed by the feeling of certainty that comes along with having all the cameras share one rational and straightforward menu. I am equally happy knowing that every lens I put on the front will focus well and with certainty. But mostly I have happy to know that I can continue to carry enough stuff to do the jobs without torquing my shoulders and my neck.

There are a few odds and ends still trickling in. I just got a new copy of the Olympus 45mm 1.8 and I need to order an electronic remote release for the cameras. I'll probably spring for the accessory component for the GH4 just to get the XLR mic inputs and pre-amps. But for the most part the shopping is done and the customer is happy.

I tried to do this before with the first few generations of Olympus m4:3 cameras but the micro four thirds cameras, when stuck at 12 megapixels, weren't quite there yet. Now the cameras seem mature and capable. Ready to do good things.

The problem with technology in general, at least where humans are concerned, is that we tend to get stuck at the spot where we got comfortable with a sustainable set of beliefs. The belief that we needed huge sensors is one aspect. The belief that portrait and still life photographers needed the same rugged camera bodies as photojournalists and people traveling down the Amazon river in canoes is another. The thoroughly misguided belief that studio shooters and corporate image makers needed cameras that could focus incredibly fast (if only somewhat accurately...) is one of the most egregious.

We get stuck believing these things because it gives us the implied safety of the pack. And in the middle of the pack is a weird and counterproductive place for artists to be. In the end I wanted cameras that would do my jobs which are also comfortable and flexible enough for someone as "career ADHD" as I am. And that's what I think I got.

And if I run across something I can't do well with the Panasonic cameras? Well there is always the incredible Sony RX10 in ready reserve.

This transition is really about giving clear power to my intention to pursue motion imaging with true passion. The intention has to be clear. That's what the change of tools is all about. I could shoot stills with anything. But video combined with stills is a whole different swim meet.....
Posted by Kirk, Photographer/Writer at 15:25 13 comments: