Yes. Strange but true. We were able to make decent photographs with older gear. In fact, maybe better..... 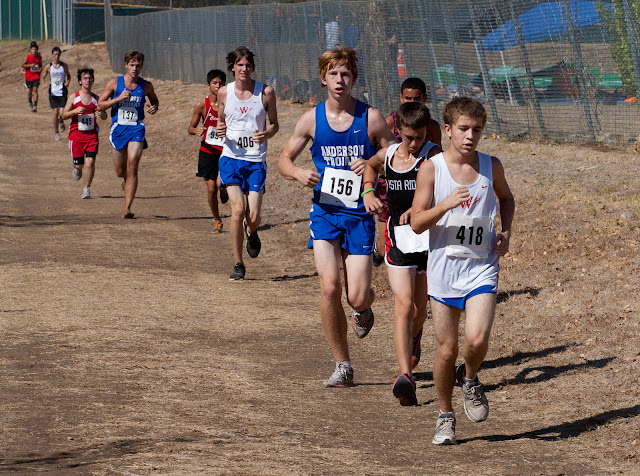 that's Ben in the lead (above) during a high school cross country meet, back in the day. He still runs nearly every day. I photographed this race for fun with a Canon 1D mark 2 N camera and the Canon 70-200mm f4.0 L lens. Even though neither product is a Sony and both were made over a decade ago I was able to focusing on people running, get the exposure correct and subsequently print the image as large as 16 by 24 inches. I know that will sound unbelievable to those who feel that having the most current camera gear is essential...

The story of the image below is equally a stretch for gear junkies. Strange as it may seem I took this image with a camera from a line of cameras that has been totally discontinued. Lens now orphaned. A relic of the dark past of digital imaging. The photo was taken nearly ten years ago, unposed, with a Sony a99 camera and the Sony 70-200mm f2.8 lens for the "a" mount Sony cameras. I expected it to be a soft, grainy mess but here we are. Sharp enough, perfectly exposed and used many times over in the theatre's marketing.

All from cameras that have been long since relegated to the junk pile of photographic gear..... 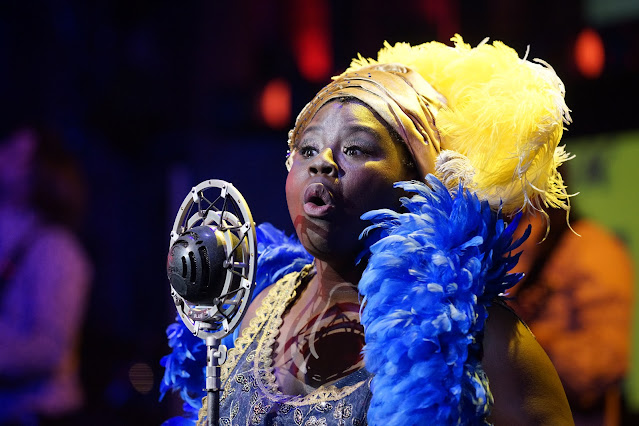 Posted by Kirk, Photographer/Writer at 16:56 15 comments: 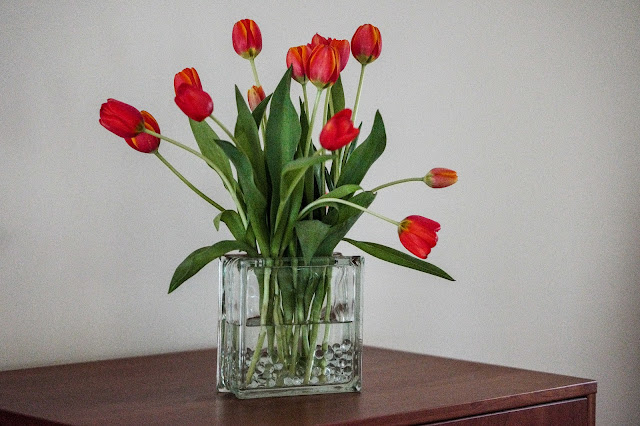 It's been a crazy Spring. I'm getting busy again with work but we've also spent a lot of time doing some renovations to the house. After a few weird cold snaps we decided that we needed to replace all the old, crappy, drafty single pane windows around the house with really nice, well sealed, double pane, UV shielded windows. Pricy but we hope the reduction in utility bills (and our home's carbon footprint) is worth it. Certainly there is a much more even temperature consistency throughout the house and it's much better at resisting the intrusion of outside noise. Then there are the new skylights for the back porch which make it very welcoming for those two or three weeks a year of mild temperatures here in Cen-Tex. We've had two dinner parties out on the porch this week alone. Trying to make the most of the current mild-to-cool temperatures and the comfortable breezes.
We put flowers around the house but every time we host a dinner our guests bring endless flowers. The living room and dining rooms look like a florist's shop. I'm documenting the daily droop and decline of the tulips just above... When all the cut flowers die we know it's time for another dinner party...
We've had some zany weather this Spring but for the most part it's been cooler and drier than usual. We've left windows open and we aren't being attached by mosquitos out in the yard as badly this time around. The trees are now in full bloom and the whole neighborhood is awash in green. Even our small, red-leaf Japanese maple is coming along nicely. But we're at the point where we're  hoping for rain. 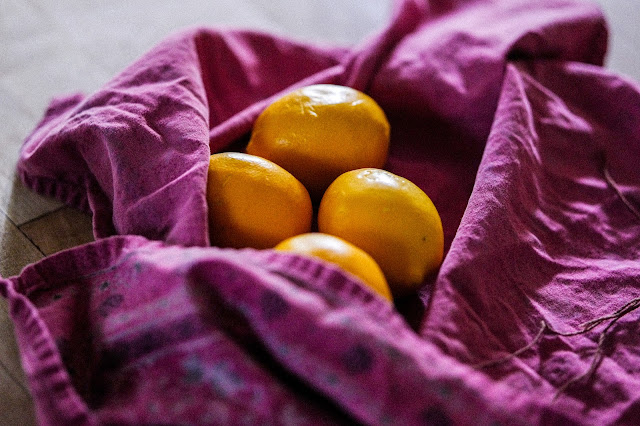 A friend brought over some Meyer lemons and I think B is working up a dessert recipe that incorporates them. I thought they were just a photographic prop but got schooled about that. Still, if you're going to wrap bright yellow lemons in a deep purple cloth I think the idea that they are prop-worthy is reasonable.
I did three different portrait jobs this week and the connective tissue between the three projects was my use of what I consider "eccentric" flash equipment. 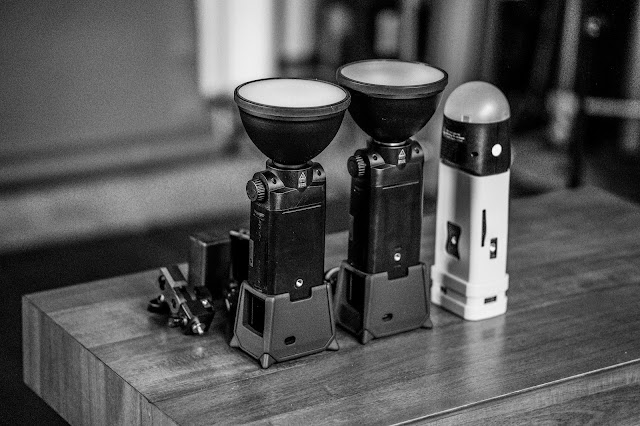 The three flashes just above are Godox AD200 and AD200 Pro flashes. They are powered by batteries and can belt out between 400 and 500 full power flashes at 200 watt seconds on a charge. They have interchangeable flash heads. The one on the right is wearing a round head and that head incorporates an LED modeling light that has three power levels and stays lit for a half hour. At the highest modeling light power setting it's very functional for studio work. The two on the left are shown with accessory reflectors over bare bulb tubes but I can interchange to a standard, rectangular flash head as well. When used with dedicated radio triggers they can be controlled in both manual and TTL modes and the triggers offer five different channels to control five different groups of flashes.
I originally bought two of these to do a job with back in 2018 because they packed down small for air travel and they were great to use in the field when no other electricity was available. I destroyed one with an unintentional experiment in durability. A wind gust lured a flash down from a ten foot high light stand to the hard ground almost instantaneously and it was too much for the unit to handle. I recently replaced the dead unit with an updated AD200 Pro unit and then, in a fit of pre-planning, bought one more to make a complete, three light portrait system that can fit in a large camera bag.
The unit on the right is in a silicon sleeve mostly to protect the rear screen of the unit which has proven to be the most vulnerable area on the flash. The two flashes on the left are protected by silicon protectors that just cover the bottom third of the flash unit (again, protecting the weak spot) but are easier to remove for packing.
I love using these lights for portrait work and have gotten very comfortable with them. I'll use one in a big modifier, like a 60" umbrella, as a main light, one unit, somewhat diffused and aimed at the background and the third in a small soft box as a back light/hair light. I have a larger A/C powered monolight but only end up using it these days on jobs that go on and on through a working day. Sometimes having an endless source of power and a very bright modeling light make work easier and quicker. But I love not having cables running across the floor. 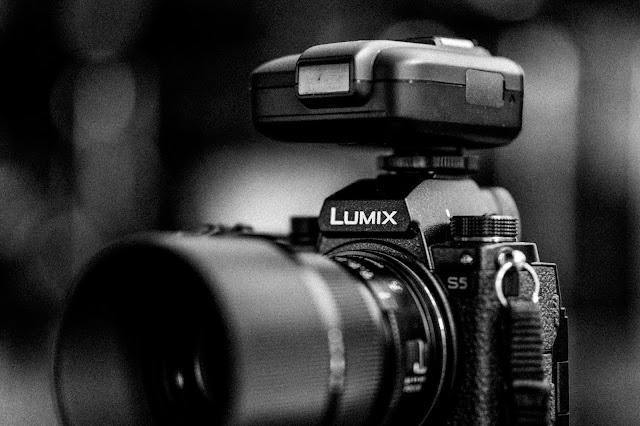 The trigger shown here (just above) is an older product called a Godox X1-T. I can program it to work fully manually with the Leica stuff. The only thing it will do is manual flash, triggered via the center pin of the hot shoe, but it can also change the levels of all channels of the flash from the camera position. It won't grant me TTL capabilities and that's the way I prefer to use the system. I'd rather be in total control of the camera and flashes.
I have a nearly identical trigger that's dedicated for Olympus and Panasonic cameras. I use that one in manual as well but if I ever get adventurous I can use the whole system in TTL mode and even use the HSS flash mode.
I'll be using two of the flashes and a trigger later this week to photograph a corporate group shot outside. With 40 people in the shot they won't by any stretch of the imagination overwhelm the full sun but they will add a bit of frontal fill light. And I can always pray for high soft clouds...
I have fun stuff on tap for the rest of the month. There is a corporate leadership event this coming week. I'll spend half the week at a nice resort photographing meetings, team building and general socializing. It's the perfect chance to test out a hybrid combination of Panasonic S5 cameras with the new GH6 and GH5ii cameras. All of which share the same batteries and the same flash dedication.
After I wrap that project I have a full week booked for a banking conference in Santa Fe at the end of the month. My plan is to make that event an "All Leica" event with the SL2 backed up by an SL and supplemented by the CL and a fun selection of lenses.
It's kind of exhilarating to have a month of bookings that will yield the kind of income (and fun) the business was generating before the Covid shutdowns. I had almost forgotten how much fun it can be to stay in really nice hotels, have really nice dinners and lunches and to document interesting speakers and panels. All in a very cool town.  Nice to be back in the saddle.
More about the upcoming work in a future blog.
One or two gear notes. I've been working through a backlog of files I shot with the Leica CL and two lenses that are quickly becoming my favorites for that sub-system. Those are both Sigma Contemporary series lenses. Specifically the 18-50mm f2.8 and the 56mm f1.4. Both are extremely sharp and contrasty through their ranges and both are small and lightweight. Finally, comparatively speaking, they are dirt cheap.
They interface seamlessly with the little APS-C Leica and give me a great walk around camera to use for my personal work but also as a supplement to projects on which I'm mostly shooting full frame, L series cameras. The CL uses the same lens mount as the big SL2 and also the whole family of Panasonic S series, full frame cameras. For large parts of my corporate jobs I can use the CL and the 18-50mm by themselves and cover what I need to without much operational friction at all.
From what I can divine from the marketplace the CL is more or less discontinued and won't be replaced. I guess it makes more sense for Leica to concentrate on the bigger L mount stuff and their bread and butter M series stuff but I find there is a lot to like with the smaller camera and a range of small but highly competent lenses.  Your mileage will almost certainly diverge.
Swimming. I made it to swim practice this past Thursday at noon. For some reason it was a lightly attended practice. What do I mean by "lightly attended"? Well, there was me. And there was the coach. And the pool. My choice of all eight lanes. I took advantage of the situation to ask my coach ( Clark Smith, Olympic Gold Medalist at Rio de Janeiro, simultaneous NCAA record holder in the 500, 1000 and 1650 distances in his time at UT Austin) for a little advice on improving my freestyle stroke. He had me work on my (miserable) freestyle arm recovery, recommending a much higher elbow position and a more relax entry at the front end of the stroke. I noticed today that I swim about 5 seconds per hundred faster as a result all while clocking a 10 beat per second slower heart rate. Wow. That's a huge improvement from one session.
The workout this morning was much better attended with four and five people to a lane. We blazed through the yardage even though Sunday's are usually less serious workout days. My lane logged about 3300 yards over the course of our hour practice. And the weather was perfect.
It's exhilarating fun to actually be able to improve on technique at 66. If you want to you never have to stop learning and improving. That makes life fun for me. Oh, and dinner parties....


Posted by Kirk, Photographer/Writer at 14:35 6 comments: