A Tourist In Your Own Town. 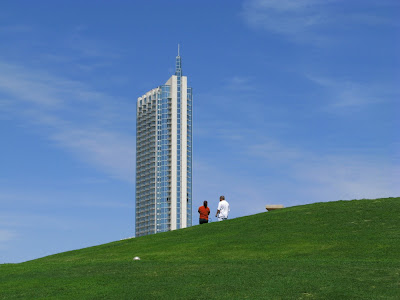 I'm sure you've done this many times. But if you haven't I think this exercise is one of my favorites for unblocking the creative gland and reforming the compositional capacitors that store pizzazz energy for the photo shooting part of your brain.  Here's the basic scenario:  You've spent the work week responding to e-mails, sending out bids for jobs (that keep getting postponed), you go to meetings. Some meetings are good.  You show your portfolio and walk away thinking that people like you and jobs may come your way.  Some meetings are dreadful, like the one with your banker who wants to redefine your business line of credit.  The worst meetings are the ones where horrible clients want to beat you up and get a better price on projects because, "the economy sucks".  And, of course, there are the daily obligations like sitting through your child's six hour track meet, fixing the refrigerator and trying to walk that fine line between saving enough money to go out for a nice anniversary dinner without blowing the regular budget.

So,  if you've survived a week of this you are probably sick of your office or studio, sick of the pressure and sick of thinking about things in general.  You've pretty much hit the wall.  Now is the time to grab your favorite camera, leave your family to their own devices and become a tourist in your own town.

If you live in a town like Austin you are probably aware that the city you know is in constant flux.  I like to take one Sunday afternoon a month just to walk around the downtown area with a camera and see what's new.  Today was a windy day with temperatures in the high 60's to low 70's and lots of bright, Texas sunshine.  We even had a few little high, puffy clouds.  I grabbed a Canon G9, stuffed in a four gig card and drove to the shores of Lady Bird Lake (part of the Colorado River which runs right through the middle of our downtown).  I parked on the south shores and headed for the pedestrian bridge which gives a great view of the downtown skyline. There are a bunch of high rise condo buildings going up and it's fun to photograph them against the stark, blue sky.

When the weather is as perfect as it was today all of Austin seems to show up to run, ride bikes and walk around the hike and bike trail.  Just the way a tourist in his own town likes it.

I shot everything I saw as if I was seeing it for the first time.  The light fixtures on the bridge. The nearby railroad bridge and the river running underneath, littered with kayaks and canoes. Then I headed into downtown with stops at the power plant to shoot those big gizmos that look like ray guns in sci-fi movies and the anything with cooling fins.

I meandered through downtown shooting the sunlight licking the faces of my favorite buildings until my feet started getting sore and my stomach started grumbling.  I retraced my steps, walked past the car and headed to P.Terry's hamburger place for a single burger on whole wheat, all the way, minus jalapenos.  It was great to just sit in the bright sun on the wooden picnic table benches and slowly savor a chocolate milk shake.  I also photographed the P.Terry's sign for fun.

The little G9 or it's slightly bigger brother the G10 gives me some sort of license to shoot whatever I want.  My friends would laugh if I said I was shy but like everyone in post "9-11" America I am a bit reticent about pointing a big honking camera at strangers.  The G cams are so touristy, so amateur "wannabe" that they almost scream, "Look at me, I'm a perennial art student on a fine art scavenger hunt..."  and nobody but the drug dealers takes those folks seriously.  So, having a little "hand" camera is your license to peer into nooks and crannies, accost strangers,  shoot silly angles and generally lurch around trying to see if you got the shot by chimping the hell out of the LCD. (I know what I said last week about chimping but when you are a tourist you do whatever the hell you like!).

So what does this five hour hike around the monuments of Austin's attempt to be a real cosmopolitan metropolis buy me?  I think it gives me an excuse not to think.  An day of shooting without the pressure of having to turn out perfect work.  License to really experiment with the tools and the toys.  I know I got some exercise as I figured my route to be about five miles in all.  A chance to re-orient my engraved memory of what is downtown. And a good excuse to go off my very strict, vegan diet and splurge with a great burger.  (That last sentence was a joke.  I live for P. Terry's burgers and fries---even if it ends up knocking 1.2 months off my total life expectancy.....).

I returned home with 345 images on the little memory card and a real appreciation for what those little G cameras from Canon can turn out.  In bright light they are remarkable.  I think I'll get a few more.

Now, here's the rant:  Stop buying big, super megapixel cameras!!!! Here's why: According to Ad Age, Adweek and the Wall Street Journal, the relentless march of advertising to the web has accelerated at a rapid clip during the last year.  Remember when we wondered when digital SLR's would supplant film?  And then it happened overnight?  What happens in trends like the move to digital imaging or the move from traditional print advertising to web and other forms of electronic advertising is the the momentum builds until the market hits a point of capitulation.  (From the latin, essentially meaning to behead the king.....).  Until the king is killed the armies keep on fighting but once the head rolls the armies stop.

We are on the cusp of print advertising capitulating to digital.  In a year or two the remaining traditional magazines will sit on lonely shelves and many of their trusty brethren will have been consigned to webmag status.  As photographers we have to understand that mastery of image files and the ability to summon tons of megapixels into the fray will no longer be effective barriers to entry to our field.  The D3x's and 1DSmk3's will become albatrosses that require learning the intricacies of downsizing.  No one will be looking for 50 megabyte tiff files they'll be looking for good compression and fast loading.  And more and more they will be looking for files that move.  As in video.

So where does that leave us as professional photographers? With the realization that many have already accepted:  We are content providers and it's time to re-orient our understanding of what constitutes content.  I'm nearly confident that I'll be doing my content in the near future with a laptop for writing and image editing and a couple of cameras like the Canon G series compacts for both still and video clip imaging.  All of a sudden there won't  be an endless need to spend on expensive camera upgrades and new models because web bandwidth will be come our new "line screen" and it will limit our need to provide huge files.  In  due time the new standard will be the resolution of HD screens and the schism between television screens and studio monitors will, for all intents and purposes, vanish.

When traditional barriers to entry into professional imaging are smashed we will have to compete and dominate the competition in three important ways:  First, we have to have better ideas. The ideas become our currency.  We'll have to be masters of lighting, at least as far as it serves our purposes in giving us an inimitable style. And third, we will have to infuse our content with intellectual assets that are unique to our own experiences.  Sounds lofty but what the hell does it really mean.  First. Better Ideas.  Instead of surviving as documenters or "picture takers" we will bring concepts and visions to the table and those will be our first line of commercial defense.  If someone asks for a portrait of a plumber it won't be on gray seamless paper with three point lighting but it might be in an underground labyrinth of crossed pipes and mysterious pools of lighting, complete with giant shrews and monsters over which our heroic plumber is victorious.  Second, the light on our plumber will be anything but formulaic.  The pipes themselves will glow.  We'll invent lighting that comes from everywhere and nowhere at the same time.  And third,  we'll use our dreams, our nightmares and our loftiest ideals as the fabric for our creations, making art so poignant that it brings tears to the hardest heart and smiles to the hopeless.  Or something like that.

And in the brave new digital world the walls between writing, filming and photographing will be liquid, pliable and permeable and we'll master all three the way Mr. Spock used to master three dimensional chess on Star Trek.  Because clients now understand that advertising is more like movies than it is printed posters in the town square.  And they are looking for directors and screenwriters, not camera operators and DP's.

The convergence came but it wasn't the stars that aligned.  It was our creative occupations and it will never be the same again.  The tools are becoming invisible and irrelevant.  The ideas and execution are becoming the linchpins that hold everything together.  And it can all be done for next to nothing.

For those of us over a certain age the biggest hurdle will be recognizing that our previous skill sets mean next to nothing.  That we need to throw away the security blankets of "ultimate camera" and "incredible flash equipment" in order to rethink the entire process.  We need to go back to childhood and see new images and new programs thru the eyes of a child.  Our child. Our most basic and undiluted creative self.

See what a walk around town will do to you?
Posted by Kirk Tuck, Photographer/Writer at 17:50 9 comments: Links to this post