Just in case you were worried... I made it in one piece and we landed ONE HOUR early. Hello Reykjavik. 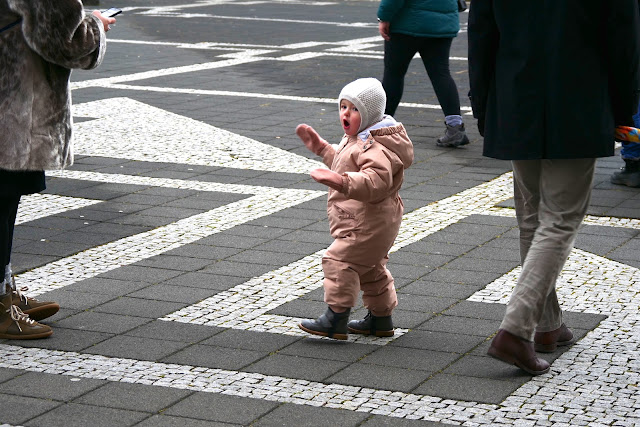 It's pretty typical for inexpensive flights to arrive in Reykjavik first thing in the morning. Nowhere near the crack of dawn; instead, think 6:00 am. The KEF airport was abosutely packed with people coming in and going out at that hour. Customs and immigration was quick, easy and good natured. I stopped by the duty free shop (taking advice read on many, many websites...) to get a bottle of very good Icelandic vodka. It's called, "Volcanic Vodka" and it's really good. The idea is that if you are a person who wants an occasional nightcap or a quiet drink while typing a blog post you might want to take advantage of the low prices at duty free as the per drink price at a nice hotel in Reykjavik might run to $20 USD per drink at the bar. Or about the price of a bottle of premium vodka from the airport shop...

There are about 8 eight people in our group, not counting the tour director and the driver/guide. We have our own Mercedes Sprinter van to travel around in but everyone's first day obstacle in an early arrival is what to do after the plane arrives (6 am) but before your hotel room is available for check in. We visited Viking World to see a replica viking boat. We visited the Perlan Museum to mostly go up to the observation deck for great views of the city then we toured the city and had a great lunch.

But you can only go so far on no sleep and we were all quite happy when we finally checked into the Canopy Hilton (a wonderful hotel, one of the my favorites from the last 30 years!!!) and collapse onto a bed. I bucked the tradition of trying to power my way through the day in hopes of sleeping through the night. I hit the bed as soon as I checked in and unpacked. I set an alarm for three hours, got up, showered, shaved and headed downstairs to one of the better dinners I've had in a while. We started with an Arctic char, headed on to a grilled lamb with vegatables, and finished up with a nice chocolate mousse. The group was lively and the discussions about photography were first rate.

I shot a bit today but was exhausted from both my last two weeks of shooting non-stop and my 24 hours of sleeplessness.

The child in the image above was throwing a tantrum and trying to incite his (very calm) parents by taking off his gloves and forcefully throwing them away. I smiled at him and he started showing off. I asked his parent if I could photograph him and they agreed. I love the image. It's my favorite one of Iceland so far. (Lumix g9, Olympus 12-100mm). Who needs glaciers who you have toddlers in snowsuits?

Off to sleep. Tomorrow really starts our big adventure.
Posted by Kirk, Photographer/Writer at 17:08 5 comments: