Taking a break from ruminating about the future of photography to buy stuff... 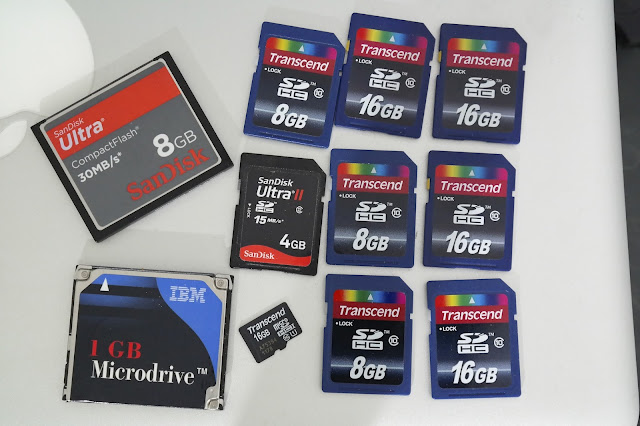 Matching the memory to the cameras. A new form factor smacks me in the face.

I've been reading everything I can get my hands on about the new Samsung NX Galaxy Android camera because I need to seem at least competent when I hit the ground in Berlin and start shooting in about a week and a day from right now.  I thought I had a good handle on the whole physical layout of the camera until I saw the dinky slots for memory cards. Far, far too small for my now standard SD cards. What the hell card type is this? Turns out the camera works with microSD cards. See that little black transcend card surrounded by the SD and the CF type memory? That's a micro SD card and it's even thinner than it looks in the photograph. I guess they decided to use it because it's interchangeable with the cards they use in the phones...

As a former boy scout I wanted to be prepared so I ordered two of the little buggers from Amazon. I opted for the Transcend 16 gigabyte versions that come with an SD card adapter. I put one (micro SD+SD adapter) into my Samsung NX 300 and everything seems to work as it should. I don't notice any increase or decrease in write time so I'm guessing the underlying tech is similar enough to be the same....to the camera. Jeez. Those cards are teeny-tiny. When I look at the one gigabyte IBM Microdrive sitting just to the left of the micro I can't help but be amazed at how far memory storage has come in a relatively short time. I'm sure I paid well over $200 for the IBM spinning miracle card when it first came out and I think I paid a whopping $14 for the little card with 16X the memory and I'm certain a much faster write time and, by comparison, infinitesimally small power usage.

I'm planning to shoot Jpegs and I will have a tablet for back-up so I'm thinking that 32 GB is more than enough for a week of shooting. If I need more space I'll just buy a few more. Amazing to think that I could put enough in an SD case to last a long, long time.

The rest of my gear (including the Samsung NX300 I'm taking along as a back up) takes SD cards and I've finally settled on the Transcend class 10 SDHC 16 GB cards as my standard. Big enough for a day of shooting and very cost effective. When they go on special I stock up. 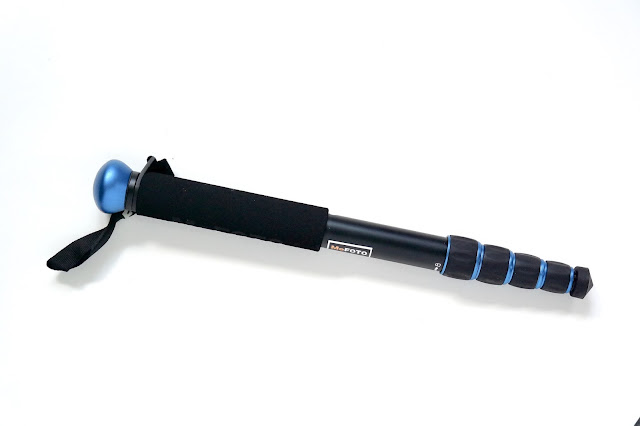 I have a crusty, old Leitz Tiltall monopod from the late 1970's that Belinda gave me as a birthday present. I use it all the time and I'm emotionally attached to it. But it's a three section monopod and that means it does not pack down small enough for international travel. I got an e-mail from Precision Camera on Friday and they were touting the little monopods from MeFoto. I like the colors and it took my a while to decide between "titanium" and the cool blue you see above. There are other colors but I'm conservative about my color palettes when it comes to hardware. At any rate I drove out to see the monopod and play with it and I liked it. The leg locks feel positive and well done and the tubes are channeled so they don't turn along with the locking collars when you lock or unlock. There's a hefty matching metal ball over on the screw mount end of the tripod and it has a little compass on it but it's otherwise just a gratuitous design addition. The round metal is dense so I imagine it might be useful, in a pinch, for driving tent pegs or something of that nature.

I like the way it operated so I bought one. The call it the MeFoto Walkabout Monopod. It's lightweight, fairly practical and pretty cheap at just under $60. I thought I'd stick it in my suitcase in case I get all Trey Ratliff-y and start taking HDR night shots. It could happen. 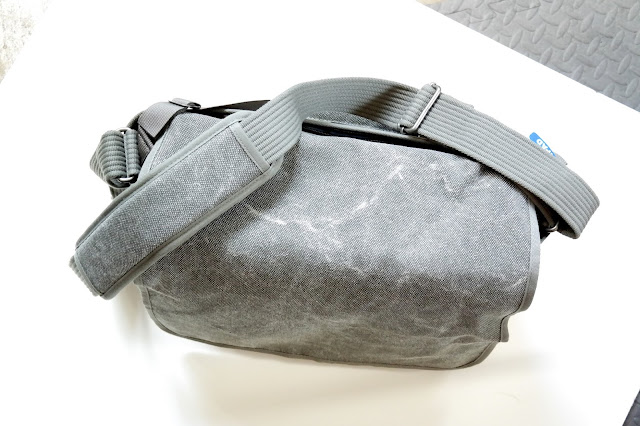 We could write about camera bags for days and days and the resulting effect would be one big argument as the prissy Billingham boys squared off against the rat pack-y Domke canvas boys and we argued the merits of carrying everything you own in a big hernia inducing leather steamer trunk on a strap or barely carrying a mirrorless camera and a small sandwich in a bag that, brand new, looks like someone ran it over with a car. I have lots of bags but I've just come to believe that any fun trip is a thinly disguised excuse to buy a new bag. So I did. I bought the anonymous looking Think Tank, fungus colored Retrospective 30. It looks so oatmeal lumpy that no one will think, Wow! I wonder if this guy has a bunch of Leicas in there..." The next aesthetic step down is a Walmart diaper bag. But, the inside is very roomy, the front pockets billow out to take whatever you want to throw in them and the back area holds a big tablet without stress or strain. I thought I'd give it a try.

The first packing exercise was a success. If I can find a spot for my razor and toothbrush this may be the ONLY bag I take with me. I figured I'd go with the clothes on my back and just buy new clothes as needed for the entirety of the trip. Belinda is trying to talk me out of this....

At any rate, the bag is comfy, the strap is good and grippy and there's more than enough room for a Galaxy NX with kit lens, 85mm 1.4, 60 macro, 30 pancake, and 16mm pancake; along with chargers and assorted other junk. The Retrospective 30 will fit where I fit... 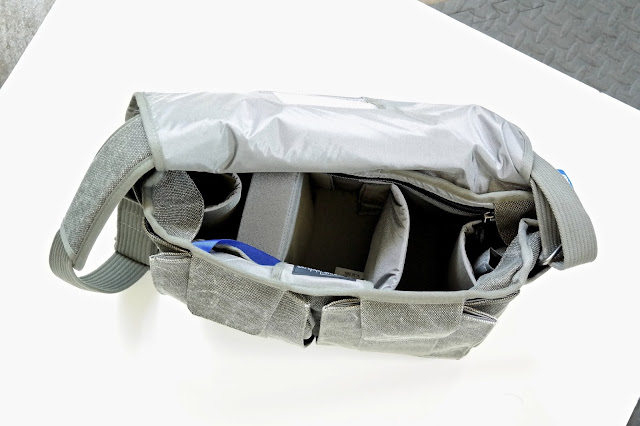 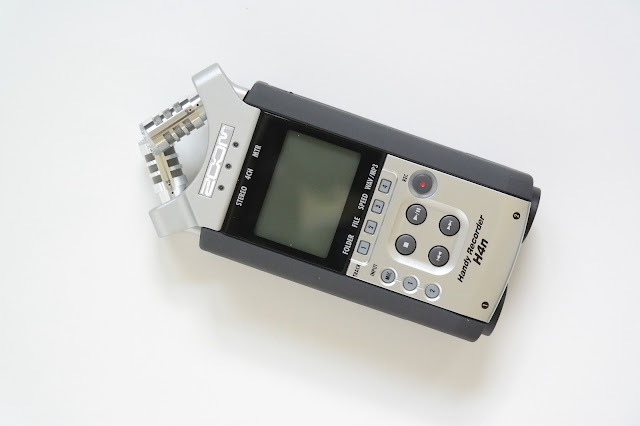 The Industry Ubiquitous Zoom H4n. Can you hear me now? Without noise?

I've been toying around with doing dual sound on my video productions. I like the idea of having really clean sound that is controllable. I like the idea of being about to plug in two XLR mics and not having to have more boxes attached to the shooting camera. I was torn between the Tascam digital audio recorders and the Zoom products but my friends who do a lot of DSLR video production, almost to a person, have opted for the Zoom H4n and I figured that since this isn't my area of expertise I'd opt for the safety of the herd. So far the sound out of this little box is great. I've been practicing dual audio techniques and slating my stuff but I'm just going to plunk down for the software that syncs video and external audio up automatically and be done with it.

I decided to pick up the Zoom H4n because I know I want to shoot more video with the NX 300 and I'll want to at least test out the video on the Galaxy NX Android and neither of them have external microphone inputs (I can hardly wait to talk to the engineers about that design decision....). I'll need the recorder if I end up doing some fun video projects with the new cameras... 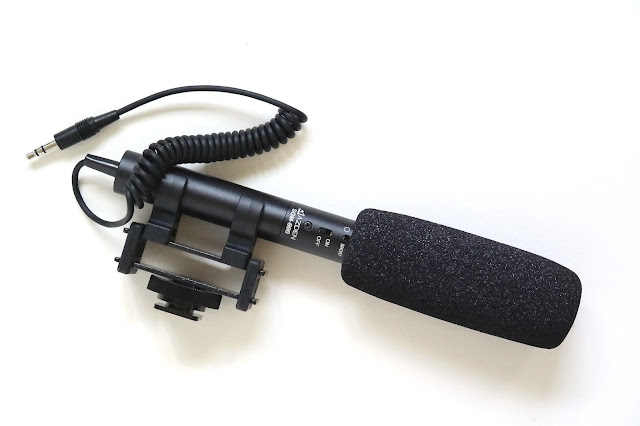 Azden Pocket Shotgun Microphone. My name, not theirs.
They call it an SGM-990.

I have some cool microphones that I really like. I'm very positive about the Rode NTG-2 and the new Rode VideoMic but they are all too big to drag along on a fun trip. And I don't have anyone coming along to hold the microphone pole and ride levels for me either. I wanted a little, pixie shotgun microphone that could hang out in the hotshoes of cameras and be ready at all times for those moments when I wanted to flop into the video mode and shoot some stuff moving around. But I wanted it to sound decent, run a long time on one battery and have the usual controls. I saw this little microphone in the sound case at Precision Camera and, for less than $100, I thought I'd take a chance.

When I played with it back in the anechoic chamber in the main bunker at the Visual Science Lab world headquarters I was pleased at its well balanced sound. It's noisier that the NTG-2 and not as transparent but it does a much, much better job in most situations than the built in microphones on the DSLRs, DSLTs and Micro4:3 cameras. And it looks cool. Very important... It has a two setting control for the microphone pick up pattern. It can have more or less side and rear rejection. It also has an on off switch so you can leave the battery in and store it for a few days without coming up battery dead.

I wouldn't use it as a primary production tool but for snapshot mode, street art mode and spontaneous interview mode it does a darn fine job. I want to see how it handles German.

Funny how traveling with a whole new system puts one in the mood to go shopping. Now I'm thinking about new shoes. But I remember buying a pair of shoes in Athens in 1978 that looked really cool but almost crippled me within a day. Maybe I'll just look for some well broken in and very comfortable shoes in the closet...

One week to go before total Samsung immersion. What a fun experiment.