Do you currently make your living taking photographs? This will be interesting or scary for you, depending on your mindset.... 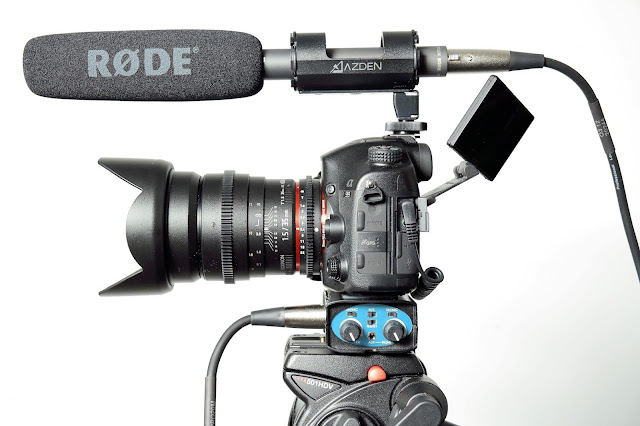 We're shooting video every week. Not just as an adjunct to photography but in
many cases instead of still photography.

Posted by Kirk Tuck, Photographer/Writer at 14:19

" While still images won’t go away, that doesn’t mean that still photographers will be creating them in the future."

Gail Mooney's got that right. The big question is do you have what it takes to turn you photography business into a video production house?

I even think the 20th century idea of "big production house" is an archaic way of thinking about what clients will need. More like small teams that come together to do projects based on skill needed. Bands of marauding freelancers....

This is exactly what Dan Pink talked about in his book "Free Agent Nation." The motion picture industry went this direction after the collapse of the studio system. With the advances in technology you don't need as many people or as much specialized equipment to get the same results. The key to success will be mastery of the skill set required coupled with strong relationships with clients.

I didn't say anything about big. Most motion production has always been done by freelancers.

Back in-the-day many production houses consisted of a director/DP and a producer/production manager -- also someone to answer the phone and do typing. Some of these production houses had 2 or 3 directors or director/cameramen. Very few had any gear or studio space -- everything was rented. And people hired as needed.

I see no reason to change a successful formula.

Most of the people I worked for were members of the Association of Independent Commercial Producers (AICP) and produced National Spots.

I have carefully looked at video footage from two still cameras I own. Compared to still files these cameras can produce, single frames of full-HD video from these cameras don't have as much sharpness or tonal range. But I can see the potential for it to happen. When 4K video becomes more common each frame of footage will be an 8 MP still. Once the tonal range of video is improved then I can see pure still photography being done in fewer circumstances, especially when recording something that is happening.

That said, I'm wondering if this prediction isn't a bit like one where people were predicting regular phones would be replaced by video phones. Skype and video conferencing notwithstanding, most calls people make and receive are purely audio. And that's how people like it. They can answer phones without worrying about having a bad-hair day, or being in a state of undress, etc. If a person poses for a still they just have to momentarily remain still have a reasonable expression on their face. If they pose for a video shot there's pressure to do something. Will people want to do that?

But Craig we can already see the amazing growth of video everywhere on the web. It seems to be crowding out still stuff everywhere.

As to the tonal range of video...we've been shooting compressed stuff with our DSLRs. Think how much cleaner and how much more DR the 4 and 8K cameras will have when we shoot in RAW formats. At higher bit rates. And with much less compression...

I'm thinking that one thing changing is that current DP's seem to want to own their own cameras because while many of the projects don't have the relatively big budgets of yesteryear the number of projects is increasing and no one wants to be running back and forth to the rental house if they can rent their own cameras to the client. Also helps to really know the shooting gear.

@ Craig Yuill, Greg Williams shot the cover of the June 2009 Esquire (Megan Fox) with a RED camera. And he wasn't the first to use the RED for stills.

When you hear someone talking about pulling "stills from video" they aren't talking about someone shooting 1080p with an inexpensive Hybrid Camera. This is what Gail Mooney said in her blog post: "But with motion cameras able to shoot 96 frames a second, and each frame being good enough to pull out and used as a still image, the changes for still photographers will be profound." Notice she said 96 (ninety six) frames a second.

I do understand that video has really taken off. I myself had all but given up on still photography in favor of video several years ago. For a variety of reasons I have gone back to shooting photos more than videos in the last couple of years. My comments are informed by my experiences with both types of media.

The point I thought I was making was that although I can see future cameras taking video footage made up of single frames that would be good enough to produce high-quality finished photos, I don't believe that the video footage we get from the typical cameras that we use today is quite up to that task. And I do feel there are circumstances where people are perfectly happy to have their photo taken but not video. We'll see what the future brings us.

@Anonymous Too: Greg Williams may very well have shot the cover of Megan Fox with a RED camera four years ago. But RED cameras are VERY expensive, even to rent. They are at this time accessible on an ongoing basis to relatively few photographers. For the cost of renting a RED for a few days one could buy a decent mid-range DSLR or mirrorless camera such as a 70D, D7100, GH3, or the upcoming E-M1. I cannot see how a typical pro could afford to use a RED camera as their main camera on a day-to-day basis.

What should cause Gail Mooney's prediction to come true is when the RED (or better) quality is available in more-affordable cameras from Canon, Nikon, Sony, etc. I can see why people are keeping a close eye on the Black Magic products like the Pocket Cinema Camera, which can shoot CinemaDNG and ProRes 4:2:2 video, but will cost only $1100. Once we see these types of products then pulling frames from video footage might very well become the norm. (I am not sure how useful shooting video footage would be for formal portrait photography or product stills.) Until that time I would expect photographers to use the same equipment to do photos and videos, but to capture photos and videos separately from each other.

How does one resolve the difference in ideal shutter speeds for video versus stills? Lighting can be done with hot lights, but then you can't freeze motion, etc. I think stills/video merging more and more is inevitable, but there will be people who specialize in one or the other for a while.

Video adds a big time and data storage/transfer factor, and I don't relish the idea of going through a few seconds of video frame by frame to pull out stills. I've done it at kids' swim meets where I want the video more than the stills, and got some interesting frames, but it added a lot of time after the event... Plus, I know few amatuers who produce interesting video :). For pros, it is a different matter, video will certainly be a bigger and bigger part of the market as internet gets faster, storage and quality cameras get cheaper (though hard to imagine much cheaper than the A3000) and more end users are putting content on the web.