Why do I so often talk about how much I like using the original Pen-FT 60mm f1.5 lens? 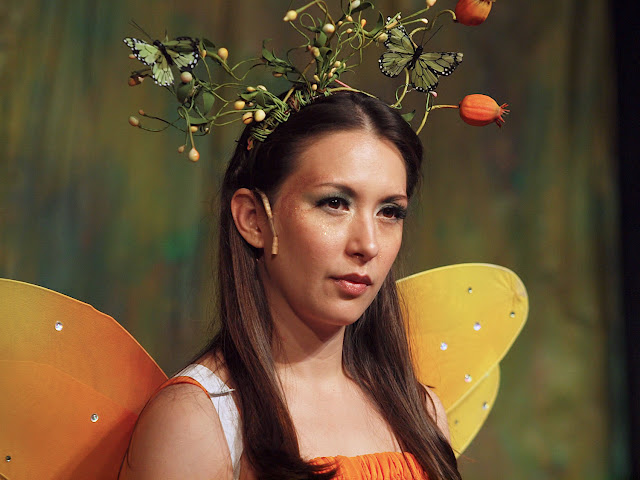 This is a shot I did at a night time rehearsal of an "Austin Shakespeare" in the park rehearsal. The lighting on the outside stage was primitive and dim, the hour = late, and the weather hot and humid. I was playing around at the time (2010) with an Olympus EPL-1 body fitted with an EVF finder and, via an adapter, an ancient, manual focusing Olympus 60mm f1.5 lens. These were early days for mirrorless but I really liked the concept and had been having great fun with the EP-2 camera.

I discovered an interesting thing about the VF-2 finder when using manual lenses. When focusing the screen would shimmer at the point of sharp focus! This made accurate focusing with my ancient half frame lens not only possible but, in some cases, faster than autofocus. I was shooting as the rehearsal was in progress and, because of the sparse and aging stage lighting, was trying to hold the camera steady around 1/30th of a second while using an aperture near f2.0. Surprisingly, our hit rate that evening was not embarrassing!

I hadn't used this lens much for nearly a decade before that because, other than my collections of older Pen FT half frame cameras from the 1970's, there were no other cameras on which the lens would work. I'd forgotten, or perhaps never been aware, of just how great a performer this lens was and is.

I use the lens quite frequently now. Most recently I used it for two black and white, 4K video interviews. When my son saw a still frame from one of the interviews he nearly fell off his chair. It looked as though I'd done a perfect still photograph of one interview subject and we might have been looking at that high res image of it on the screen.

The ancient lens is perfect for video. It's sharp when I need sharp and then the background falls off into a luscious banquet of bokeh. Nice, soft, rounded bouquet of bokeh. Would I take a thousand dollars for that old lens? Not on your life! Do you have a recent German car you'd like to trade? Then we'll talk.

New stuff? Not seeing anything out there that's as nice. Sharper? Maybe. As nice? Nope.
Posted by Kirk Tuck, Photographer/Writer at 18:39

Mike, I'm sorry. I accidentally deleted your post. Sadly, Blogger makes it easy to make mistakes and offers no "undo." To all that wonder what the hell I'm talking about Mike posted that there are two 60mm f1.5 Olympus PenFT lenses on Ebay for, if I remember correctly, about $650 each. If they are in mint shape I might snap up a second one. They are that good.

Sorry for being ham-fisted on the keyboard, Mike!

Kirk, One lesson from your example of the young lady in the play is that many of these 1960s and 1970s lenses are amazingly good optical quality. I sometimes use old Olympus OM and thread-mount Asahi Takumar lenses on a Fuji X-E1 (16 mpixels), and the results are great. I think many current digital photographers, in their quest for the latest and greatest new uber-lenses, are overlooking some amazing bargains out there.

Guys, can we all please whisper when we talk about how good these old lenses are? I'd like to buy some more, but at the rate things are going with Kirk's brilliant reviews pushing the prices up, I'll never be able to afford them!! ;-)

I recently purchased an almost unused Pentax 645Z. One of the joys of this is the low prices of the older fine-quality manual-focus lenses. A 35, a 75 (the "normal") and a 200, all of them in excellent condition, set me back a total of $450. I'm getting great satisfaction from the portraits I've been doing with it.