Hmmm. Digital or Film? And why? 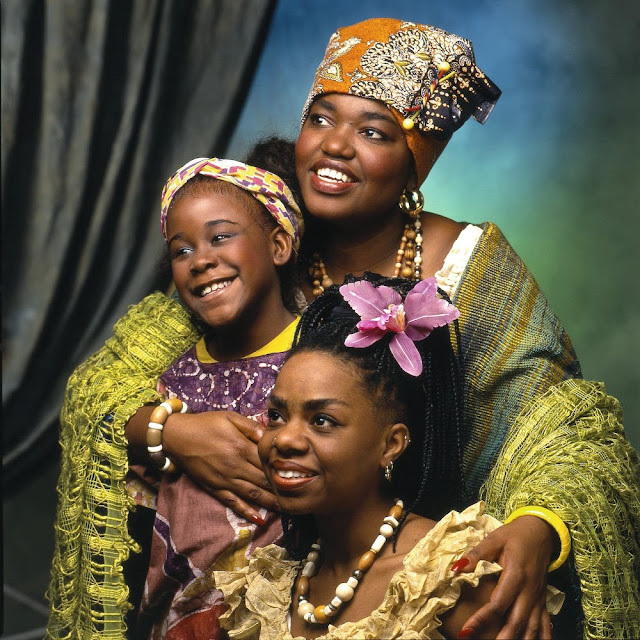 Posted by Kirk Tuck, Photographer/Writer at 22:06

Asking the blindingly obvious, I know, but why does it matter any more?

Lovely image! Even if it started out on film, though, it's digital now that you've scanned it. But my guess would be it was a digital shot, mostly because of what seems to be a complete loss of detail in the white fabric on the top figure's shoulder. But that could easily be the result of digital post-processing. Given that it's a studio shot under controlled lighting, it's hard to be sure of anything to do with color or contrast.

Film, I think, because of the slight grain visible in the background; and something about the way the skin tones render.

Digital. Only digital can blow whites into oblivion in that fashion...

Digital. Cause the skin tone is too nice to be film.

Film. Cause the tonal gradations are too nice to be digital (despite the blown whites, which may have happened in scanning). The color also seems film-like.

I'm going to say digital because of the way the highlights are blown on her shoulder. I'm guessing some treatment in Snapseed for the grain and color.

Ok, point taken :) I'll say an older digital camera. The files from the new tech don't look like this, at least not in my experience, and the colours handling here seems to be characteristic of a digital file. So I'll get a bit more specific and guess that this is one of the older 6-10 megapixel digital sensors from around 2007...but I'm fully prepared to be embarrassed here.

Since I'm looking at the picture on an electronically lit LCD-monitor and not a piece of paper, I'd say digital :-)

I would say digital. Not sure which one. Looks quite Nikon-ish, but it does look like FF camera and I dont know any Nikon FF camera that would blow up highlights.

Maybe something obscure? Like Canon 1Ds with Nikkor lens?

It just looks like film, good film. Medium format type film. There is a reason people shoot film, it's for this kind of a look. People spend lots of time and money behind a computer to try to get an image to look like this.

Kirk, I imagine you must be grinning while you are reading these comments.

I suppose I'll throw in my two cents. I'm guessing film. The tones in the subjects' skins have nice transitions with none of the blown highlights one sees in many digital shots of people. The image seems to be square too.

At this point, however, digital cameras are producing tonal curves much like film would capture. It's becoming harder to tell. Only the grain pattern of film will be the "give away".

Do not have the technical skill to determine the source, however, I can take a guess, and say digital, maybe an old Kodak DCS pro. Whatever is correct, I do much like the look.

Just spinning off a comment left yesterday by a reader who confesses to always like my film work much, much better than my work with digital. Just interested to see which resonates.

"on closer inspection, these are loafers." - rainier wolfcastle.

Kirk, I honestly cannot tell. Whatever the original source (film or digital), it has certainly been digitized at some point along the way, or I wouldn't be able to view it right now. Either way, the exposure was taken by someone who knew exactly what they ware doing with their lights.

I'm going to guess that it was taken with a digital camera.

Digital. The shoulders are too sharply defined of a line. Film tends to roll off looking more like reality. Digital can't do that- it has to decide on what pixel is doing what, making a sharp edge. Humans don't have sharp edges. Film, being on a molecular level can represent what nature is. Besides, I don't think you would shoot color film for a portrait. This is probably one of those medium format digitals you were loaned.

Was my guess too, but making for example SLR/n to blow out highlights is near impossible. :D Unless it was intention..

It seems like a medium format film shot, done on transparency (hence the blow-out on the shoulder) film and then scanned on your Epson. The giveaway is the transition to the background.

I'm going to say Kodachrome only because I miss it so.

Film because it's square. Oh wait you can crop square in photoshop. This is so confusing and I will never get this time back. Wonderful colors and composition. Perhaps you should be on CreativeLive.

"Perhaps you should be on CreativeLive." Thanks but I think they prefer technicians who stay on message...

It was shot with a hasselblad using film (the two marks on the left give that away), scanned (because it is on the internet) and then pulled through snapseed (which it says in the image file name and EXIF).

So it is both.

It is also similar to the way i use my film cameras. I mostly shoot black and white, which i can develop myself, scan it and post process it in lightroom. The hybrid workflow gives the best of both worlds.

I knew someone would beat me to this comment :)

All those who said "film" are correct. It was shot with a Hasselblad on chrome film which has a more limited ability to retain highlight detail than negative film. The one thing I did in Snapseed was just to lower the saturation as my orignal scan on the Epson was a bit......garish.