The Fuji X-E1 is an interesting camera. 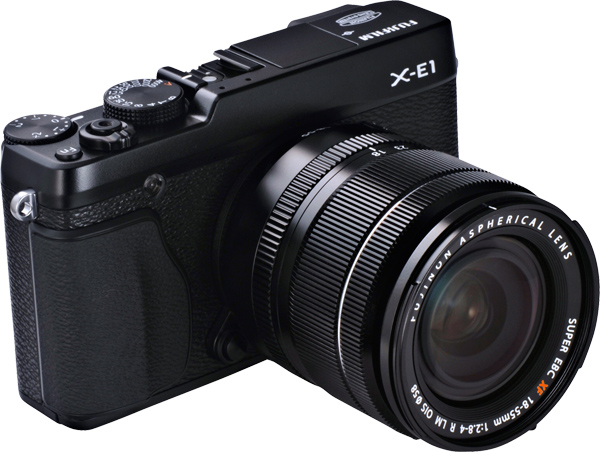 Fuji X-E1. The way they'll find a market for the X series cameras.

My friend Paul and I had lunch on Tues. We are both camera-a-holics. We should both be in some sort of rehabilitation program for obsessive camera buyers. But there it is. Until someone does an intervention I count myself as incorrigibly curious and always ready to jump into the other pasture where the grass seems greener and more lush.

Niether of us own or have used the X-E1 yet but we are already putting together our basic, new systems in our heads. I have a good tolerance for zooms, especially ones with short lengths and with the word "ashperical" printed really big right inside the filter ring. Paul will naturally hold out for either the Zeiss glass that's said to be coming or, at the very least the cherry picked, single focal length lenses from Fuji.

Why are we so interested? Well, the chip and the lenses are the deal with Fuji. I've read a number of reviews of both this camera and it's older, more expensive and more problem laden big brother and while there are a bunch of nits to pick with some of the operational characteristics of the camera the universal consensus seems to be that the sensor is magnificent and that most of the lenses rise close to the top of the heap compared to what is available from everyone else. Leica excluded, of course.

The body is well styled and beautifully and simply designed. It seems like it would be a good take anywhere camera. The use of an EVF means that zooms lenses aren't an issue as regards the finder. The black finish and the black lenses harken back to the Leicas they seem bent on imitating and referencing. But mostly I think I am interested in the camera because the implied quality of performance seems to rival a Leica M9 at a price point about 1/6th or less of the price.

While I am currently infatuated and satisfied with my Nex-7 (especially after the firmware update) I can't help but wonder just how much better the overall performance of the sensor really is. And everyone with a Nex 7 is always in the waiting mode for more and better dedicated lenses from Sony.

Two things slow me down from actually putting in an order for this camera. The first is the feedback from owners who've shot both Sony Nex 7's and Olympus OMD's who have also auditioned this Fui camera. The EVF is not up to the level of quality and implementation of those cameras. I'm not sure I want to go backwards now that I have finders I really like.

The second thing that holds me back is the fact that the camera currently really has to be viewed as a Jpeg only proposition. That may change now that Adobe has raw files to work with but Fuji introduced a new RAW format with a new way of de-mosaicing the output from the sensor and it seems that the only way to consistently get good conversions is to use Fuji's slow and flawed software.  I've been down that road before with the S3 and S5 cameras and I won't load Fuji's software product onto my little computing machine again. But as I've stated, all that may change as the products mark time in the market and in the hands of third party software developers.

If you are transitioning from dinosaur DSLR cameras into a new century of photographic tools and you are ready to toss aside the heavy iron and start making images with mirrorless EVF cameras you should go into a store and check one of the X-E1's out. If they've fixed the focusing issues of the X-Pro-1 and maintained the quality of the sensor it might just be one hell of a photographic imaging device. And what they didn't get right out of the gate might be tweakable in firmware updates.

Fuji's has always made cameras and camera sensors that intrigue me and have enabled me to turn out beautiful files. And their lenses are also well regarded. I hope that these cameras are the spearhead of a whole new family of cameras from Fuji. I can hardly wait to put one through its paces.

Posted by Kirk Tuck, Photographer/Writer at 15:00

I think a lot of us would agree Fuji has the best APS-C sensor available today. That being said, the lack of Focus Peaking is a deal breaker for me, and the latest output I've seen from the new native lenses was actually OVER sharp, to the point of being counter productive. Add to that the fact I'm not fan of faux retro for camera bodies (and the fact my NEX6 is awaiting to be picked up !), and I have all reasons to stick to Sony for the time being.
Kirk, you don't need no Fuji, shooting one NEX7 in each hand and you can't hold any more camera ;)

I bought the X-Pro1 and love it not because of just the image quality but the different way of shooting I've trained myself to do., with both eyes open!

I have Focus peaking with my 5Dmk3 and although I like focus peaking as a concept (and my eyesight is getting worse). Frankly, I"m trusting more and more of my AF lenses than ever.

I've yet to try the X-E1, but I am intrigued and interested to find out how it feels in my hand and maybe as a back up body.

I was able to try out a pre-production model of this camera. Focus is not going to be an issue with this model, it's quite good. It's a beautiful camera, not too small the way some of the mirrorless cameras are but not bulky at all. The EVF was simply not up to snuff...very very laggy and choppy...but this was a pre-production model so no final conclusions from me. It is a beautiful camera though and the image quality will be terrific.

I love the X-Pro 1 and this is essentially the same camera (identical internals and firmware).

Why I love it:

A) I can finally adjust SS and aperture as the light changes by simply looking down at the camera at waist level without it powered on... just like my old F3.

B) The colours and overall image quality from the sensor and my XF 35mm.

C) The accuracy of the auto focus. It was never a speed demon but firmware 2.00 improved things fairly dramatically here.

F) All of the above, making for the first digital camera I've been truly happy with.

Fuji apparently gets their EVF from Sony for the X-E1 and made their own eyepiece optics, with higher eyepoint. It is possible that the inner electronics is not as fast as in Sony's cameras though.

As a GH2 user, I am undecided between the X-E1 and the GH3. Unfortunately, it is highly unlikely I will ever find a camera shop with both to compare side by side. The decision will come down to IQ (better with the X-E1, maybe) and the extra functionality of the GH3 (I love swivel screens for low down shots). The bastard son of the GH3 and the X-E1 would be just perfect !

As good as the X-trans sensor might be to prevent moiré I wish they used a traditional bayer color filter array. I prefer a bit of moiré here and there in exchange for: better resolution, faster demosaic'ing which would imply faster AF, faster refresh rate in the EVF and overall faster operation, better compatibility with 3rd party software,... In other words, it would solve the camera's weaknesses, while moiré is not usually such a big problem as to cripple such a beautiful camera just to prevent it.

Grass is always greener.. I think they are all similar, the Nex 7. OMD and the Fuji (got the xpro1) For me; if I want more to chew on, sorry to say, then it is my full frame. But it is nice to have the option the change cameras - a lot. Gretings Jens from Norway.

I have a Nex-7 and a 5dMkII. While I love the form factor of the Sony and the EVF and the tri-navi, the lenses don't stack up. I even bought the Sigma 30mm in an attempt to close the gap. The el cheapo Canon 50mm 1.8 beats the crap out of it for resolution and especially for contrast. The Sony lenses are even worse.

I sold my Fuji X100 because I was fed up with the problems (slow focus, sticky blades etc.) but I have to admit the images from the X100 were tasty. The Sony Nex-7 is OK, but held back by the lenses. Sony is an electronics company and doesn't seem to understand the goal of photography - image quality.

I'm really tempted to try the X-E1, but leery of Fuji's track record. It's like choosing between a Lexus (Sony) and a Jag (Fuji). You know the Jag is going to break and cause you grief, but when it works, life is grand! The Lexus is just not going to excite you. I'm held back by two things: my investment in the Nex-7 and the negative reviews of raw converters for the X-trans sensor. Maybe in a year or so...

I'm currently writing a long review of the Sony Nex 7 and I take issue with your assessment of the Sony lenses and lenses for the seven in general. The 50mm 1.8 for the Sony is remarkably good and I think that several of the after market Sigmas
(19 and 30) are very, very good lenses. I've made large prints with the kit lens and find that if I do my technique right (tripod, low enough ISO, good focus) they are as good as anything I ever stuck on my Canon 5Dmk2.

The Nex cameras are small and light and require more care to hold still. I'm of the opinion that any of the DT lenses made of the DSLT cameras are every bit the equal of their Canon or Nikon counterparts. Try them with a EA1 adapter and if you still can't make images that work well something is wrong with your particular camera.

There is focus peaking, when in manual mode just press your command dial.