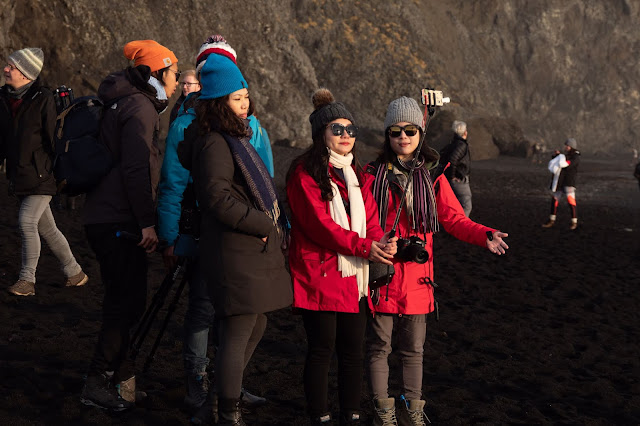 On the beach. Iceland. 2018.
The raccoons have officially left the chimney. We stopped hearing anything the day after our Critter Control person dangled the "coyote cloth" down the chimney. The mom hissed at it's arrival and there was a lot of chattering from the kits but later that night things quieted down. By the next evening everything was silent.
A technician came by earlier today to confirm and spent a lot of time making sure that nobody got left behind. Once he was certain he called in the exclusion expert who applied thick screens and other barriers to the top of the chimney. He also did a couple of 360s around the house to look for any other weak spots.
We are now sealed up and ready to resume life in a more relaxed fashion. Apparently, no raccoons were harmed in the process but they were inconvenienced and are probably paying high rent in their new digs.
While I liked all the people that Critter Control sent by I hope not to have to see them in their "official" capacity in the future.
Just thought it was important to loop back on this topic and provide some closure for those who were tracking the progress of my encounters with wildlife.
Thanks for your interest.
Posted by Kirk Tuck, Photographer/Writer at 16:25

KT,
Congrats on your successful wildlife experience. An experienced guide is very important!
Just be very happy a skunk did not invade. Just ask me what that was like. Not good. I'd take a raccoon over a skunk any day.

When we lived in San Antonio for a couple of years in the late 1980s, we rented a house with a fireplace. As renters, we did not realize that it had an unguarded chimney. One evening we heard a tremendous noise in the fireplace. A racoon had fallen down the chimney and was trapped on top of the closed damper. It could not get back up, and we were understandably not excited about opening the damper and hoping it would run out through the living room and out the front door. A vet came over from animal control - a friend of my wife, who was the health director - and brought a catchpole. The plan was to open the damper and grab the racoon before it got away in the house. I was assigned the racoon wrangling task so my wife and the vet could watch with amusement. When I opened the damper, it wedged the racoon in. I had to get into the fireplace, poke the racoon to get it out, and then grab it. It is shame that was before phones with video cameras. It was evidently very amusing to everyone else. :-) I did catch the racoon and it was moved to a new home.