Strolling through the swampy weather with nothing but a naked fp and 90mm of optical happiness. 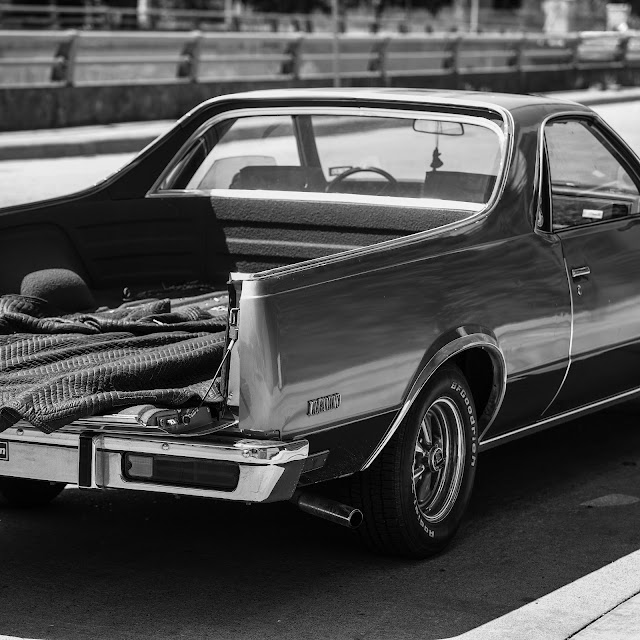 El Camino.
The family had stuff to do yesterday so after swim practice in the morning I was left to my own devices. I thought long and hard about cleaning up, and straightening up, the studio/office and I started the process in earnest but soon became overwhelmed by the drudgery of the chore. And bogged down by the realization that I once again have a lot of cameras and lenses to muddle around with. I decided that a walk might help me clear my head and give me some self-awareness when it came to my obvious camera hoarding. (It did not. I think complete self awareness might be a long term project for a mental health expert; or team. But if I pay someone thousands of dollars to help me figure out why I like to buy cameras I will instead be saddened by the knowledge that I could have skipped therapy sessions, bought new cameras with that money and come out about even in the end...).
I used ample amounts of sunscreen, wore long safari/Sahara pants (UPF 50) and an anti-stylish hat, a moisture wicking, breathable, light weight shirt and spiffy, bifocal sunglasses and headed toward the desk to, like a guest at a buffet, pick out a camera and lens to drag about with me in the heat. As I looked over the inventory it struck me that I had not yet paired the Sigma fp with the 90mm Sigma f2.8 lens for an outdoor shooting experience. I put them together, tossed an extra battery in my pants pocket and headed out. And, in a different twist, even though the sun intensity was set to 11 out of 10, I decided to try composing and focusing on the naked, rear LCD screen. No protective loupe! I even removed the vestigial grips from the camera body.
It was just me, the camera and the lens, all tethered together by a Domke Grip-Strap.
I started out with the idea of shooting both in black and white (Jpeg) and in the square aspect ratio. But I started seeing stuff I knew might look better in color and folded like a cheap chair under a fat guy using it as a step ladder to hang a string of ornamental lights. But I kept the Jpeg setting and the square. Two out of three. So much for disciplined operational parameters...
When I got into downtown I remembered that I hadn't had a post swim breakfast so I stopped by Torchy's Tacos on 2nd St. for a bacon, egg and cheese breakfast taco and washed it down with a cup of their middling good coffee. I looked for the better version of coffee but it doesn't exist in that restaurant.
When I use the Sigma fp for walking around and casually photographing I like to default to the "standard" color setting. It's pretty, and well behaved, and has just a bit more contrast bite than the neutral or natural setting. I knew from experience that the Sigma 90mm f2.8 Contemporary lens is nice and sharp all the way from wide open to pinhole so I left it set at f4.0 and ignored the camera settings for the rest of the morning. > 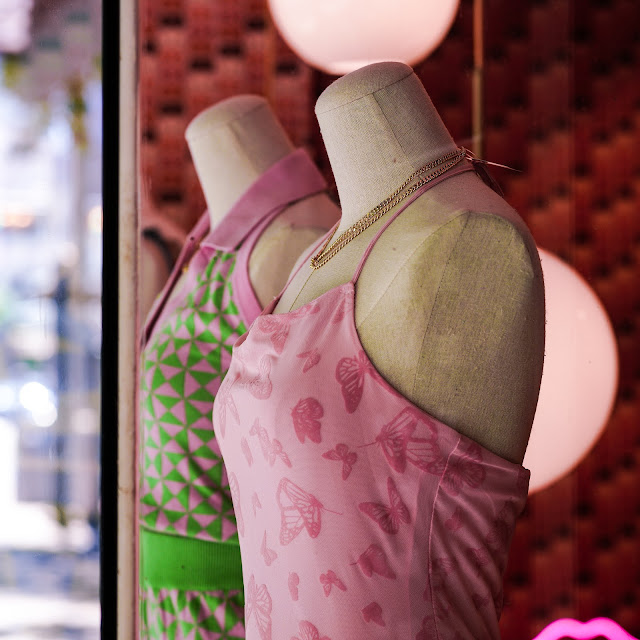 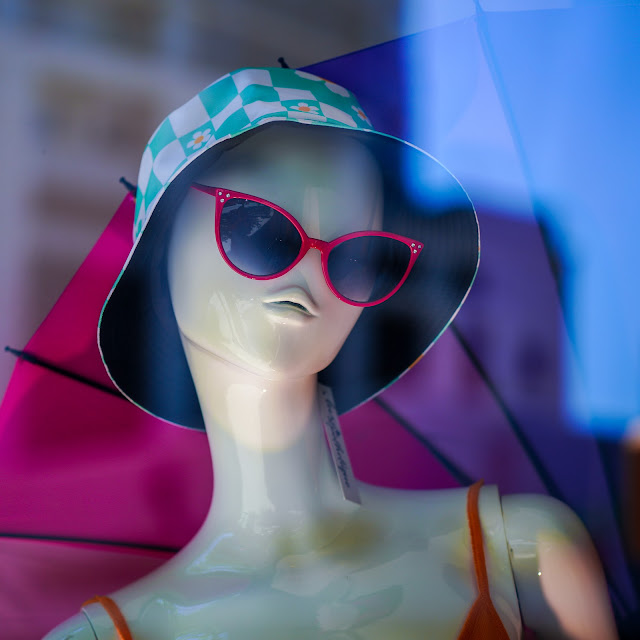 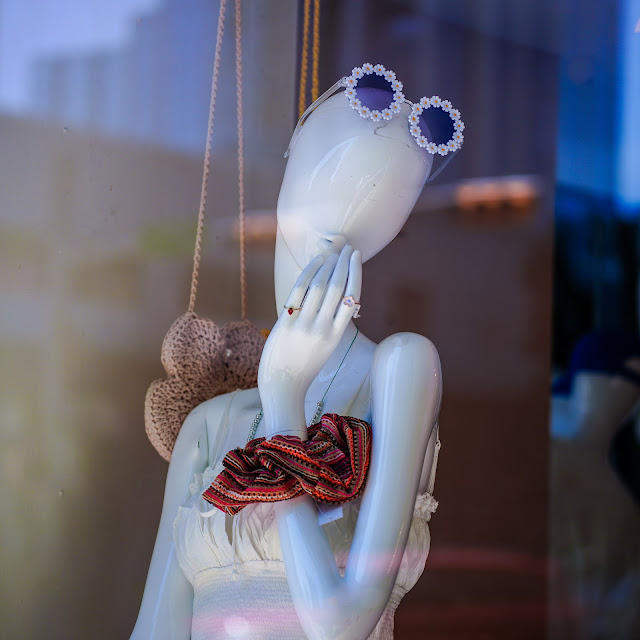 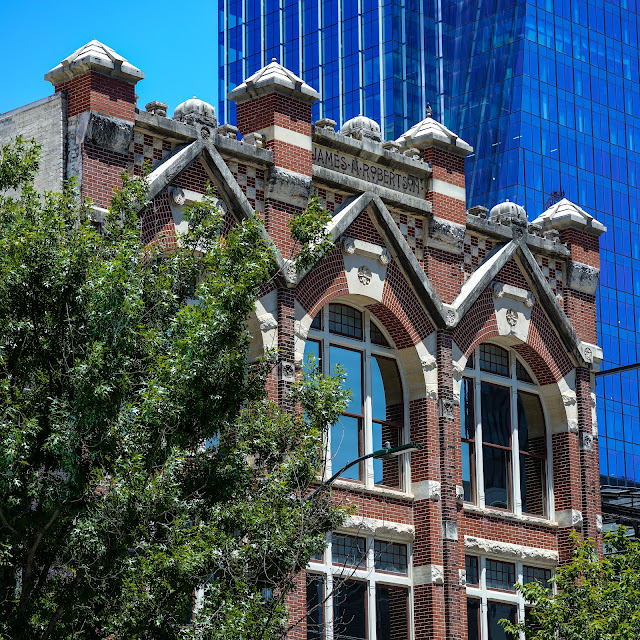 The combination of the Sigma 90mm and the Sigma fp is pretty magnificent when
it comes to recording detail and sharpness. The photo above was shot across four lanes of busy road by a recently accosted photographer walking through a hellish heat wave with a camera and lens that are both bereft of image stabilization.  Just below is a close up looking into the center arch..... 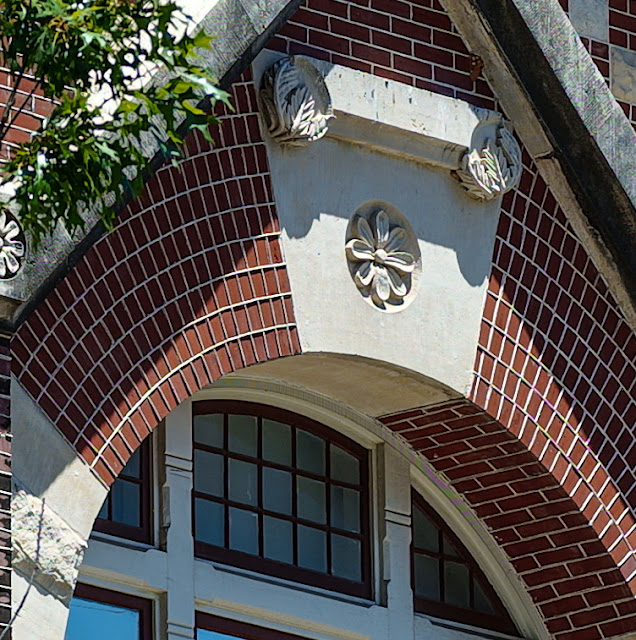 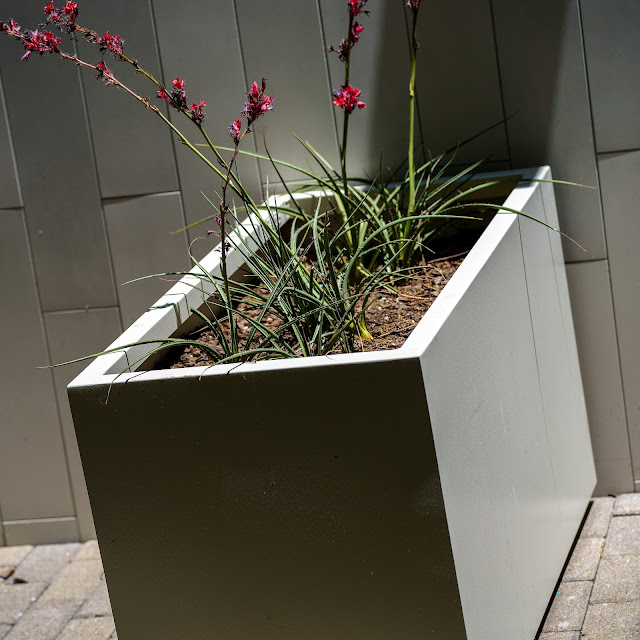 I threw my best "Garry Winogrand" tilt at this one.
I think I'll include it in a Guggenheim Grant application... 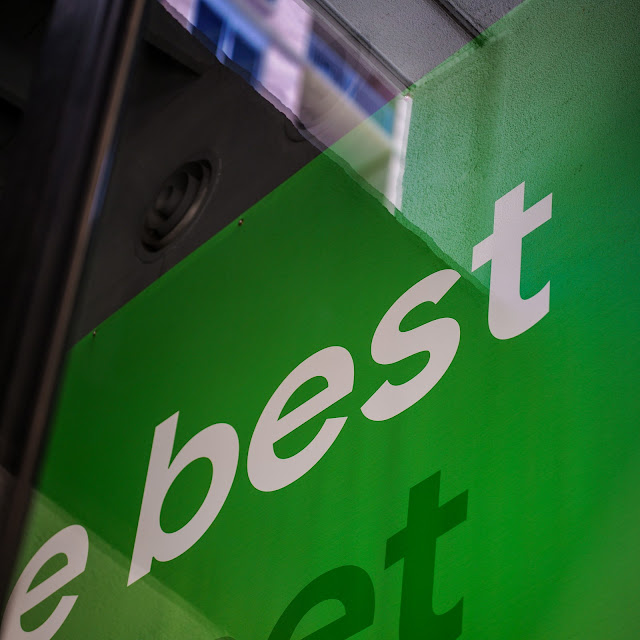 Walked by the Google building on 2nd... 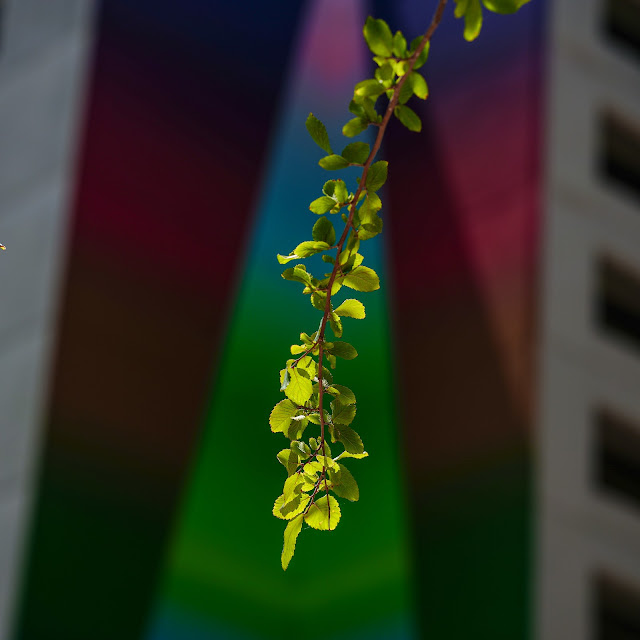 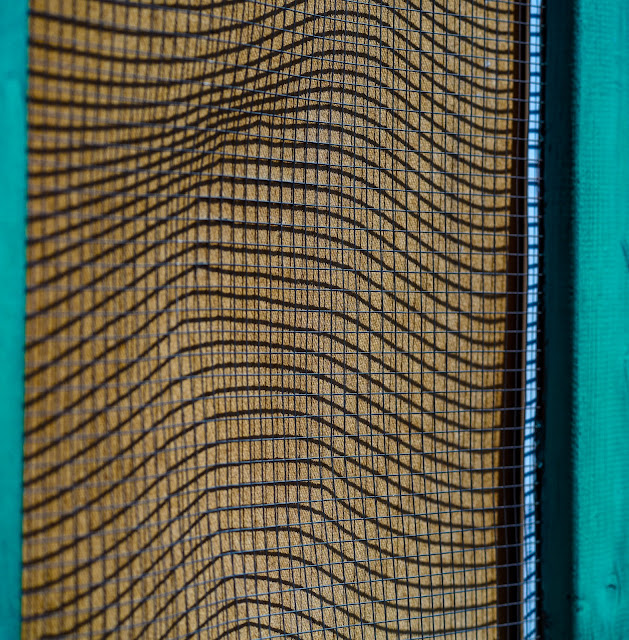 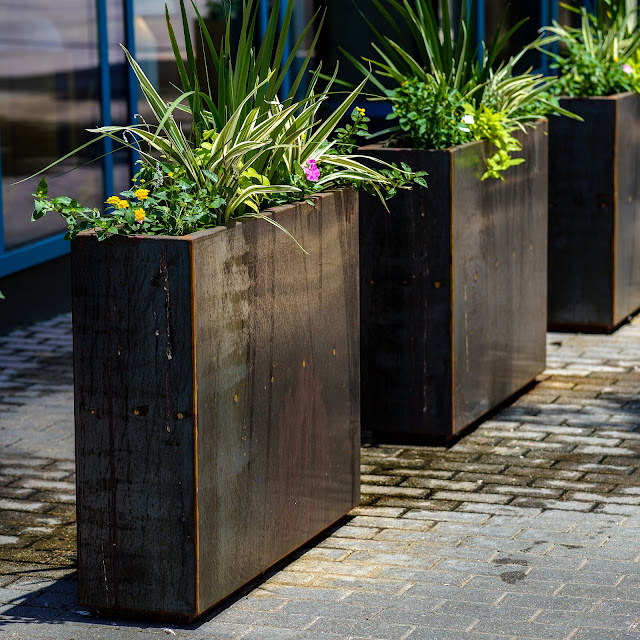 Ben came over for dinner. He and I threw together a Niçoise salad and waited for B. to come home from her visit to San Antonio. We laughed, told stories, had some wine, and then he headed back home and B. and I settled into the books we were reading... Altogether a day in which I didn't try,  even for a minute, too hard.
Posted by Kirk, Photographer/Writer at 15:29

OMG. We just got about a half an hour of rain!!!! First time in a month. And...the power went out. But not for too long. And the temperature dropped 10°. But the humidity ramped way up. Ah well. The weather giveth and the weather taketh away.

Those photos of the blank faced models reminded me of Ishiguro's book Klara and the Sun. Very moving story. What book were you reading at home? Maybe that one?

OK. Wow.
Gotta admit that while the subjects weren't necessarily riveting, the colors and clarity were superb. On my 8 year old laptop/workstation the images looked like I could reach through my screen and touch them. Sigma should hire someone to help make their cameras faster because clearly it has the chops to make almost 3D images. The only images that I've seen you post recently that had more of that 3D effect were taken with your Leica.
Well done.

I have never encountered an aggressive homeless person at -25 C (about -13 F) in winter. OTOH, it's damn cold.

I felt the third mannikin shot was...affecting. I almost felt sorry for her, being frozen like that.

And after reading your headline, I thought, "Oh, thank God. An fp is a camera."

I don't mean to be rude, because I like your state in a lot of ways, and have recently set two books down there. But 46 illegals found dead in San Antonio, when the driver of the semi-trailer abandoned it in the middle of a heat wave? In many ways, Texas is truly f***ed up.

JC, sad to say that's not the first time something like this has happened in S. Texas. But....show me a state that's not totally fucked up and I'll move there. Maybe. But in many regards I'd still take Texas over Florida...

The square look suits you

And each State is fucked up in its own way.