I thought you might like to see what a video frame from a GH5S, shooting in L. Monochrome with an Olympus 12-100mm f4.0 Pro, looks like when we pull a still frame. 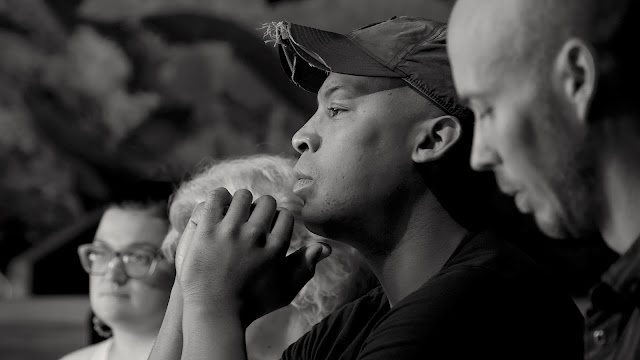 A frame from a 4K video clip shot at Esther's Follies on a Panasonic GH5S.
The cast is doing a script rehearsal. Fascinating to me.

(Below: my edited version. The target I'll aim for in the promotional video) 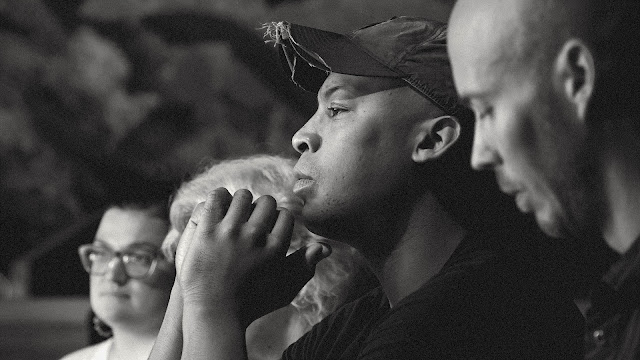 (Maybe with a bit less added noise the next time around.....).

I've read over the last few years that we will soon be able to pull still frames from our videos. I decided this afternoon to see what a 4K still frame, taken directly from a handheld video clip shot at 30 fps (1/60th of a second shutter) with the lens set at f4.0.

Well, this is what mine looks like. I would guess that by using a tripod I could have made the frame even sharper. I would also add a bit more midrange contrast to the image but wanted to present the file the way it was shot for video.

It's interesting to me to see just how nice the frame looks prior to grading or post processing.

My GH5S gets more interesting every day that I shoot with it.

Posted by Kirk Tuck, Photographer/Writer at 18:01

There is something about that lens. Can't wait for the rest of the frames.

I'd love to hear you wax poetic about how this rocks as your new video star. Heck, I'd really like to see some video roll before editing and after. Sounds like a real winner!

Coming your way after I finish the edit on my Esther's Follies video.

Wow. I have never given it all that much thought, but that is impressive.

You mentioned in a separate post that you don't really use the camera for stills, because of ergonomics. You kind of could, though.

... as long as you were willing to sort through 240 still images per second...