When a camera has certain performance parameters that exceed your expectations. By a lot. Today it was the GH5S shooting black and white video. 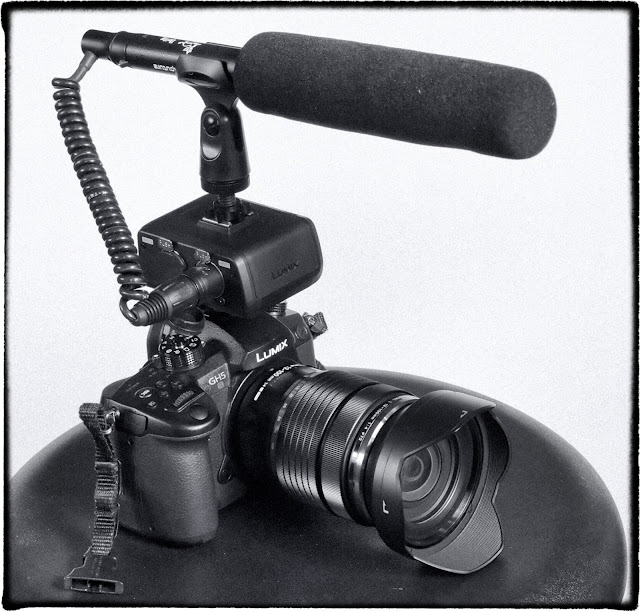 I recently acquired a Panasonic GH5S and I hadn't had the opportunity to give it a thorough test until this week. While I've shot some RAW stills with the camera one doesn't really buy a $2500, 10 megapixel hybrid camera unless one is looking for some specialized performance, and, in this case that performance is all about the video. I have an original GH5 but when the S version came out I read up and realized that the dual ISO feature and the improvements (though subtle) in video image quality and overall color science would be a plus for any projects I might consider.

When the opportunity came along to trade one of the two GH5 originals for an almost new GH5S I came up with a check for the difference (fair is fair) and didn't hesitate.

I spent part of last week and any spare moment during last weekend familiarizing myself with the video menus and the handling feel of the camera when used as a video camera (as opposed to how one handles the camera when shooting stills...). I also tested the codecs to find the right balance between creating files that would work in our typical end media and not getting lost in
the weeds of perfectionism by shooting at crazy high bit rates in a glorious (but dumb) attempt to squeeze the last drops of potential from the system. I wanted to shoot in 4K so we could pull some photographs from the feed but I wanted to keep the flow manageable. I found my compromise at 4K, 30 fps, 10 bit, 4:2:2, at 150 Mbs. It's an easy load for my V90 spec'd SD cards and, when I bring it into Final Cut Pro X I'm transcoding to a Pro Res 1080p working files. I'm also generating proxy files just in case my editing system gets bogged down.

I added the microphone to catch ambient sounds and snippets of real conversation but our intention is to use music as our predominant sound track. Counter to everything one reads on the web I used the microphone and camera in the ALC (automatic level control) settings so I didn't have to keep an eye on levels; the visual component being critical in both projects.

For the corporate project on Monday I did have to record a voice over narrator segment and, of course, we set manual levels for that. I'm glad I was a boy scout. I remembered on Monday to bring along a rolling case filled with sound blankets. We used them to treat the small conference room we used as a makeshift audio studio. The blankets helped kill room effects and bounce back. I used the microphone close in to my V.O. talent and monitored carefully with enclosed headphones.

On both my executive shoot Monday and my Esther's Follies Theater shoot on Tues. I used the GH5S handheld for most of the time. The Monday shoot was in color and I was fortunate that the company I worked for had great lighting that was a near match for the daylight coming in from banks of huge, floor to ceiling windows. I carried a gray target around to do custom white balances and found that the corrected settings were pretty close, in most situations, to the prevailing color. On Tues. I shoot everything in black and white using a modified version of the camera's L. Monochrome settings. I added a highlight/shadow curve in camera and pulled down the contrast and sharpness a bit. The files look great on the studio monitor.

With a lens that has its own high performance image stabilization, in conjunction with the camera's electronic stabilization it is entirely possible to shoot very smooth and largely jitter-free hand held video. I think the real secret to decent handholding of a camera is in learning to relax ones arms and legs a bit; keeping up a certain tension in your muscles introduces more small jitter effects. Using a monopod with "chicken feet" and a fluid head is 90% of the way to a good tripod for this kind of constantly moving shooting.

The camera is really, really good as an ENG rig. I have a shoulder mount which I practiced again with last night and the combination of image stabilization and a shoulder rig gets me more stable image than just hand holding. I can see this camera as a reportage film tool but it could be improved with just one addition: built in neutral density. But in truth adding a variable ND filter to the front of the lens is not that big a hassle.

On Monday we shot, or had the camera on, from 1 pm until about 4:30 and I used one and one half batteries. Not bad at all and in line with any other DSLR shooting video. Much better than when shooting with my Sony RX10 cameras.

The nicest thing about the files we're getting is the sharpness and detail in the images. While I liked the color and tonality of my Nikon D810 files the impression of sharpness was never quite convincing. The files from my various Sony A7 series cameras was sharp but the color palette wasn't as satisfying. I will say that the discovery of more comprehensively good files from the GH5S is whetting my appetite for the next step up. Something like the EVA-1 or a Canon EOS 300ii. But that's a slippery uphill slope that never gets cheaper. For where I am right now the GH5S is a nice fit.

It will be interesting to see how much improvement Nikon has made in their new line of cameras. I'm pretty sure it's dawned on them by now just how important video performance in cameras has become. From reports from friends who own them the D850 is a very, very good video camera for this kind of corporate work. It doesn't have the high bit rate files of the GH5 family but in its intended scope the 150 Mbs files seem like a good fit. So little time, so many cameras to experience.

I'm heading back downtown to the Esther's Follies Theater for another afternoon of black and white video shooting. My inspiration for this project is the Beatles film, "Hard Days Night." I'm loving every second of shooting this. It's not interviews, it's not scripting, it's just fun shooting and impromptu capture of the live theater process. Catch up with you later.


Posted by Kirk Tuck, Photographer/Writer at 10:02