The project that was the most fun for me this year. 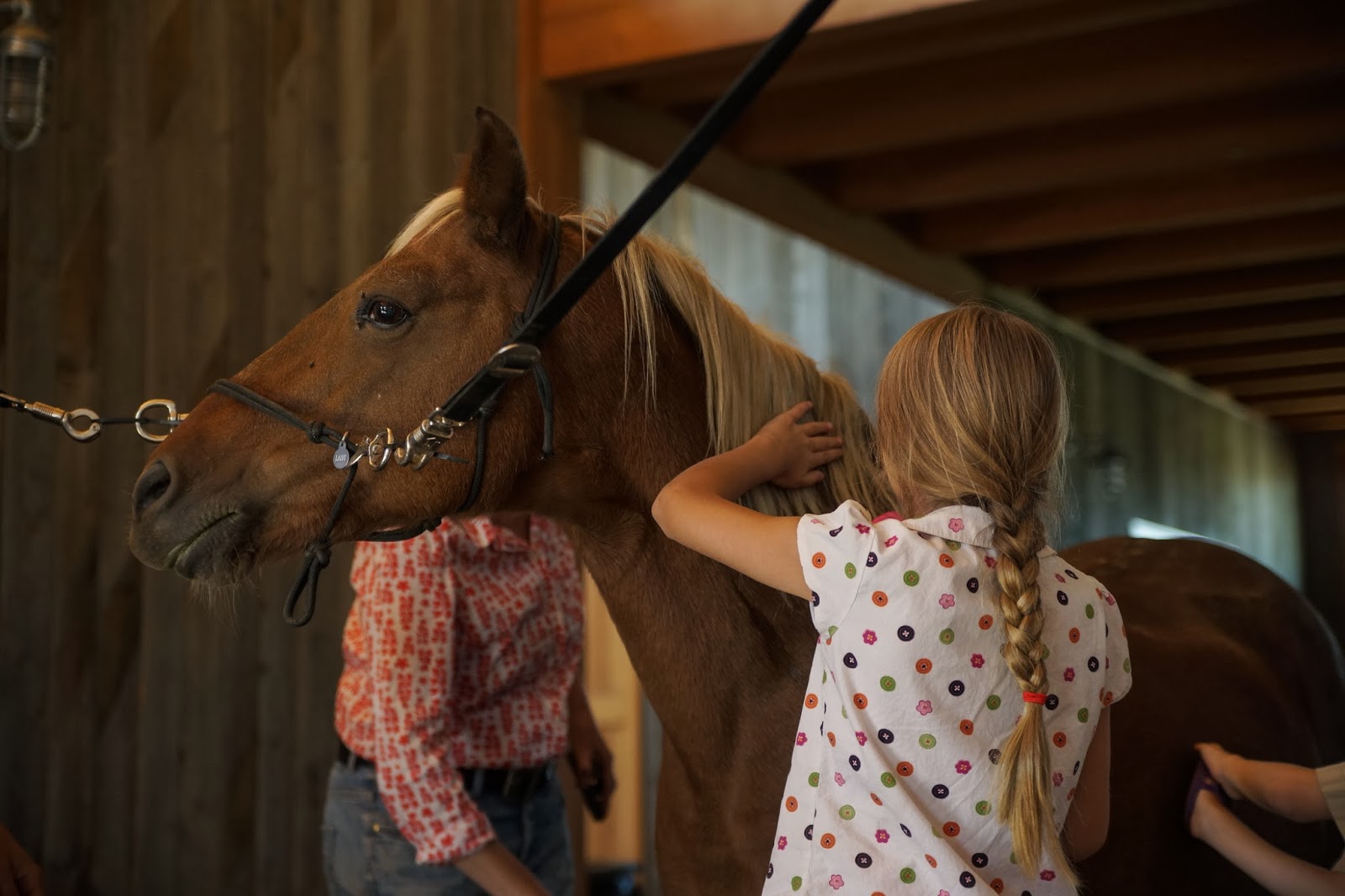 My Craftsy Family at work on a horse ranch outside Boulder, Co.

I've done many fun projects this year including a wonderful trip to Berlin for Samsung but the project that I had the absolute most fun with was without a doubt the Family Photojournalism class I taught for Craftsy.com. On one level I was the instructor but on another level I was most certainly a student and, in my time off, a very enchanted Colorado tourist.

It was right at the end of September when it all happened. It was steamy hot in Austin and when the Craftsy producers and I decided on our production dates I was happy to get out of town and head to Denver. We were to produce a 2.5 hour program which at its core is a training program for the person in a typical family to whom the responsibility for taking family photos falls. It's not a class about how to leverage the latest techniques or get the most out of frightfully expensive gear. My counterpart, Josh, was a real world dad who really did want to find out how to take better images of his kids at home, school and on vacation. He showed up with a hand-me-down Nikon D200, a 70-300mm kit lens and an 18-200mm lens that looked like it had been through a war, then a mud fight and finally a trip in the tumble dry setting on a clothes dryer. Instantly vintage.

My instruction of Josh would take place at Red Rocks Park, at his suburban Denver home and at a wonderful horse ranch with a crown of mountain peaks framing the background. We covered exposure, hand holding, tripod use, fill flash and even a bit of Lightroom post processing. And we had a blast following around Josh's wife and two adorable kids.

I was "on camera" for most of the adventure so I really didn't get to shoot much. We were depending on Josh's images to use for almost all of the "B-roll" and he came through like a pro. I stayed busy trying to remember which of three cameras to look at and trying to extemporaneously put together what I needed to say for each segment. (No teleprompter, no formal script and no cue cards!!!).

We worked with a great video crew on the project. Their job was to make me sound good, look good and keep me on track so we had what they needed to do the transitions and be able to piece together a two and a half hour program that made sense, taught the lessons and looked good.

The lessons for me were all about being on the other side of the camera. I'm used to shooting and directing but being directed and having to remember simple blocking (where to move and when) and deliver spoken content was a totally different experience. Things I took for granted as a photographer seemed really tough when I got put into the role of being "talent."

The biggest lesson is that doing multi-camera work on location requires more crew. In addition to producer/director: Pattie, we had a sound engineer, an editor/digital technician, camera operators, assistants and a make up person. We worked with a lot more gear than I usually do on my "heroic" one person shoots. And with the gear and the complexity of having to simultaneously shoot in multiple angles there is a certain inertia to getting set up and rolling for each shot. The crew used a jib for most of the scenes and that required several people to move it from one location to another. I needed a bit of rehearsal so I understood what we needed to cover, what would show and where I would end up when I stopped talking.

In most scenes we created some good back and forth with Josh so we had to make sure that we moved as a team and didn't trip over each other.

When you work in the outdoors, especially in public areas, the recording of sound becomes a very complex game requiring much patience and many "do-overs." I might really nail a good line only to have the audio declared "unusable" because of a throaty Harley Davidson motorcycle coming into aural range just near the end of my lines. On another afternoon we seemed to be "sound dodging" a number of private and commercial airplane flights and the attendant roar of engines.

At one point in the park I waited in the bright sun until car after car went by only to be interrupted by the arrival of trail hikers. But when the silence was on we hit it quickly and got our stuff done. In the down time I got to review the sound to hear just what the sound engineer was going for. With my eyes closed and headphones on I could hear every little chipmunk squeak or candy wrapper rustle you could imagine. It's only by dint of skillful microphone placement and careful timing that we were able to get what we needed. That, and a bucket of patience.

I learned by watching the camera operators the lesson that at least one camera always needs to keep moving. When you are cutting all the footage together being able to cut to moving shots, compressed shots and wide angle "establishing" shots goes a long way toward keeping a program visually interesting.

Another "miracle" of being the "talent" is that you don't have to worry about any of the details that are commonly fretted over when you are also the producer. I never worried about when lunch would arrive...or from where. Never needed to know which cooler had the sparkling water, that just seemed to appear at need. And I never needed to sweat the details of how things looked, a team of professionals was taking care of that for me. When we broke for the day each day I didn't have to load gear into cases, load cases into cars, re-pack for the next day, charge batteries, etc. I could hop into my rental car and head off to my hotel, to a nice restaurant or to one of the good museums in Denver for a bit of site seeing. Where my hands on shooting days generally turn into marathon sessions of both shooting and logistics my talent days ended at a reasonable time and required only a tiny modicum of homework: review the outline for the next day.

I loved being on the other side of the camera but you probably already guessed that I'm a bit of a ham. It's fun to think that I have something of value to share after nearly 30 years in this business/art/craft.

When I flew back home after spending eight days in Denver (we did a shorter production the week before) I was tired and drained but a bit sad. I'd come to enjoy this new, fun work and I was  melancholy to be leaving it behind. When I got back to Austin I noticed that I immediately started incorporating what I'd learned in Colorado into my own projects. I write scripts now with simpler lines and I write scripts so that my talent has lots of natural break points in which to regroup or for me to cut with in edit. We're trying to write shorter scenes so we don't run out of camera movement before we run out of words.... And I'm trying to break my reliance on artificial lighting and learned to manage existing light better. And by that I mean always being mindful of color balance and exposure so that lit footage can be cut together with natural light footage without huge visual discrepancies.

The two valuable lessons I learned from Pattie, my producer/director on the project were these: An outline that's been thoroughly discussed, picked apart and improved beats a script because it gets the content across in a way that is more genuine and natural. And, that details are important. Where I was standing when we cut and went back to shoot close ups for B-roll, my inflection, my expressions and even my posture were all important cues to continuity and continuity really counts for believable documentary style work. But finally, the thing I learned that is most valuable is that it's important to stay flexible because sometimes, when you are working with really talented people, a different approach or a happy accident can work better than all the careful plans.

It's amazing and fun to go from "know it all expert" to newbie beginner student all in the same project and all at the same time. What an incredibly fun and immersive way to learn new stuff. 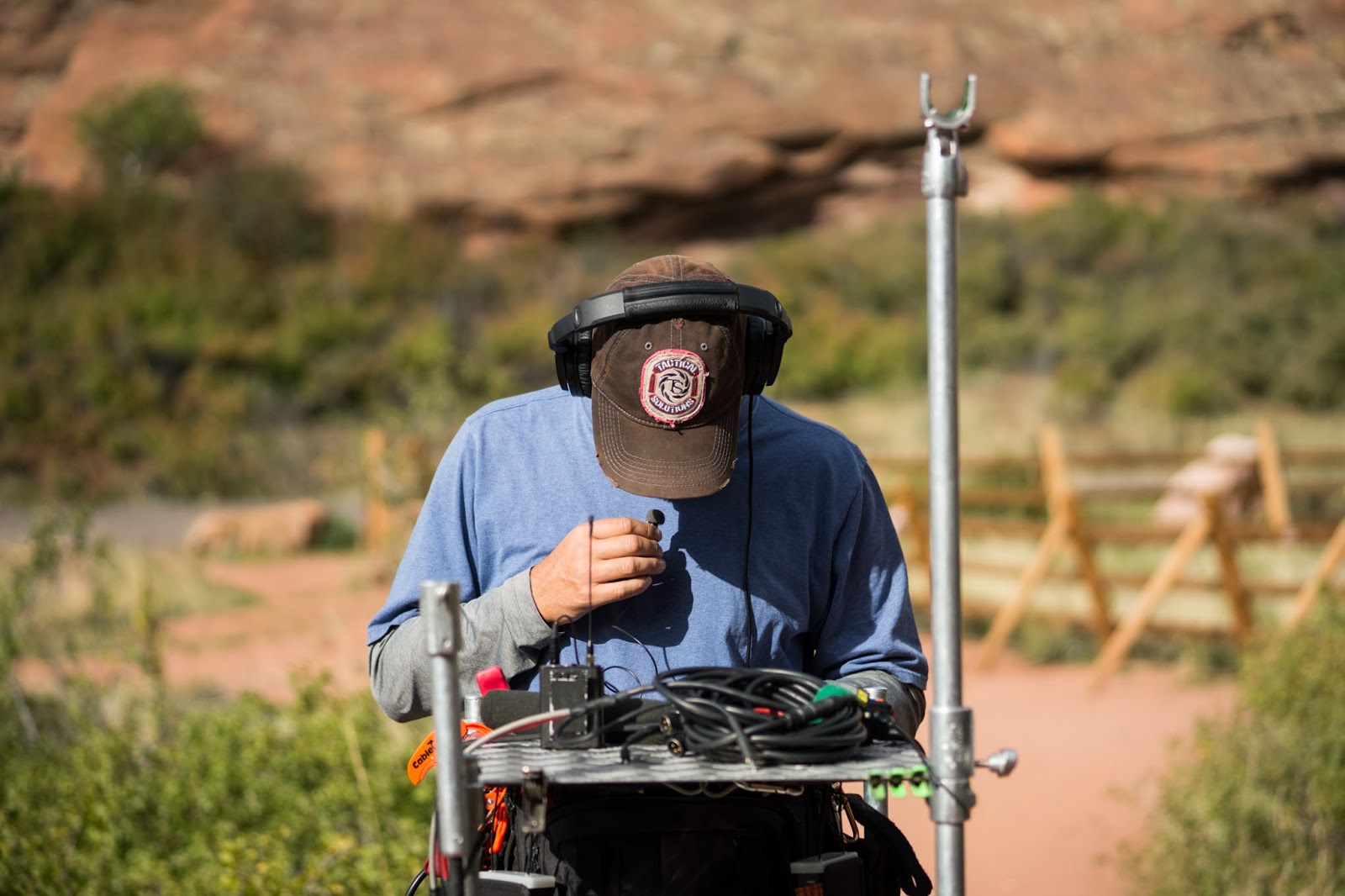 Our sound engineer tries  to master all of the outdoors to make me sound good.
Dedication.

If you go to the on of the links above and click through Craftsy also has a free course I did on family portrait stuff. I'll post a direct link a bit later. I'm running out the door to have fun....

Added note: Nearly 20,000 people have signed up for the free course since it went live in November. Happy!
Posted by Kirk Tuck, Photographer/Writer at 11:49

From a recovering copy editor: The name of the park is Red Rocks.

I enjoyed reading your perspective on video production.

I thought I was the only one who called myself a "family photojournalist" ... nice to see others using the term. I got back into photography right after my oldest son was born late in the 20th century. It's cool to see you branch out with your projects!

I am the son of the family and the photography "fell" to me as I grew up.

I too know what you feel about finishing the job. A friend an I volunteered for a reenactment which would be recorded on video.
Your picture of the sound engineer makes me remember it, ours was a funny guy.