The Odd Couple. My favorite camera and lens combo of the day. 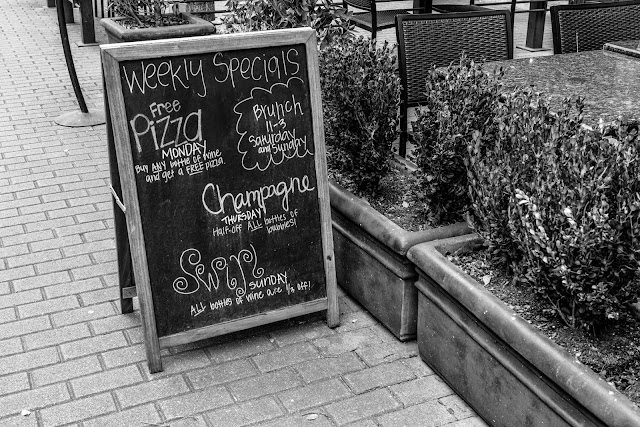 If you are like me you spend a lot of time thinking about which lens might be the absolute best lens in the world for your kind of photography and then spend even more time trying to figure out how to pay for it. And when you finally achieve the nirvana of acquisition you are stunned by the realization that the cost for ultra-high performance is a big, fat lens that weighs a ton and has a visual footprint so big that even sloths sprint away when they see you and your "best in class" jumbo lens approaching. It wasn't supposed to be this way...

What I think we really want, if we can eliminate the zany idea of "having to have the best!!!" and concentrate on how we use lenses (and cameras) is a compromise. While I realize that compromise is no longer fashionable in politics I realized a few days ago that what I was looking for in a lens is really just the best compromise.

I started processing these lens thoughts as I looked once again at 50mm lenses. I want something that works natively (with all features enabled) on my L series cameras. I wanted a lens that would work well on a Leica SL2. I played with a $5,000 50mm f2.0 Apo Summicron which I should love, love, love since it's supposed to be the mostly highly corrected and painstakingly designed  normal lens currently on the market. There are two reasons not to like it. The first is how big it is. It's just so......obvious. It's ungainly. When combined with the camera it just makes the proportions ugly.

Sure, it may help one take better photos in that focal range than any other lens of its kind on the planet. But the cost is outrageous and if the lens actually scares people then at what cost is perfection achieved?

I should have known better based on my year long experiences with the Panasonic 50mm f1.4 S-Pro lens for the L mount cameras. It's a stunning optical tool. If you live with a test bench you'll be delighted. And the times I've used it for commercial work where appearance, size and weight aren't mission critical I've been impressed by its stellar optical performance; even when used wide open. Just stunning.

But the problem is that I've spent $2200 on a normal lens that I end up more or less refusing to carry around in the street and use on a daily basis. And that sends me back to the studio to get something more...comfortable. Less threatening. More portable. Less ponderous. And when I reach into the drawer I sometimes pull out the very likable 45mm f2.8 Sigma lens. It's adorable and looks cool. It's understated, small and unassuming. But I find myself constantly wishing it was a stop faster and 5mm longer.

I like the 65mm Sigma f2.0 equally well and it is a stop faster but sometimes I just crave that 50mm focal length. I have an adapted 50mm Contax/Zeiss f1.7 lens and it's a very good performer but I'm then locked out of being able to use autofocus and, when in MF, I don't get the "touch the ring and see a magnified image" feature all of the native L mount lenses offer. Ditto with the older R series Summicron 50mm.

What I guess I am really waiting for is the introduction of the Panasonic Lumix 50mm f1.8 which I'm sure will come out in the near future. At least I hope it will.

I'm tired of pursuing the "ultimate" in performance if it means that the lens must become more or less physically unusable.

For the last week I've surprised myself with an odd combination of lens and camera. I put the inexpensive, Panasonic 20-60mm zoom lens on the SL2 one afternoon and discovered that, physically, it's the perfect match for the camera. It feels just right. The right weight. The right size and, happily, the right cost.

I've been taking this combination with me everywhere. I'm certain that this lens pales in comparison with the much more expensive lenses I've used but on the other hand I'm equally sure that it does a competent job and, if I used it optimally, it would return all the performance my typical walking around photos require.

The funny thing about photographers is that we tend to see camera bodies in a vacuum, rarely accounting for the haptics of a camera and lens combined together as a system. Sure. the SL2 body feels great when I pick it up without a lens on the front. It's almost a perfect gripping surface and design for my hands. But as soon as I put the "wrong" lens on the front it can feel awful. A great example is, again, that super high performance 50mm Lumix. Add it to the SL2 and the whole package becomes front heavy, large and ungainly. Take the "perfect" 50mm off the front and stick the 50mm Contax lens; complete with adapter, on the front and it once again becomes a perfect combination for actual use.

This may be one of the reasons I've never walked around town with a 70-200mm "professional" lens. It's just too big. The big, fat lens draws way too much attention, is awkward to carry and weighs so much that I have anxiety about the whole package being so heavy that the strap lugs will get wrenched off the camera. I use that lens all the time for jobs but it arrives on set via a camera bag and goes straight onto a tripod via the included tripod adapter. But out on the street? Forget it.

Back that brings me right back to the 20-60mm. What I think I'm "giving up" is a fast aperture and a bit of optical performance outside the center 50% of the frame. I know the corners are softer than if I had used a much "better" lens but I also know that for most of the images I make the far periphery of the frame isn't important. What is far more important is that they camera feels just right in my right hand as I carry it down the sidewalk. The lens offers me three of the focal lengths I like to use: 40, 50 and 60mm. If I carry just this one lens and see something that requires a wide shot I'm ready without having to dip into a camera bag and change lenses.

Yesterday I decided to stop presuming that I was giving up a bit of sharpness by choosing the zoom over some more effete primes so I set up a few test shots and put the SL2 on a tripod. I focused carefully and shot every lens at f5.6. The 50 Lumix S-Pro was absolutely great. But then so was the ancient, Contax/Zeiss 50mm f1.7. And interestingly enough, so was the Panasonic at 35mm and 50mm.

Now, as I'm heading out the door I have many fewer concerns about using the zoom for more and more stuff. I'm starting to get more comfortable at 20 and 24mms as well. But more important than how it performs optically is how it feels when I use the whole system. I know car analogies get boring but most of us use our lenses like we use cars. They are functional. We mostly drive 65 miles an hour or slower. Our ability for aggressive acceleration is very limited. Whether you drive a BMW M5 or a Honda Accord you reach your destination in the same comfort and safety. It's almost a binary thing. You use the tool (car) and you arrive, comfortably at your destination. While there is more performance potential in the M5 chances are very rare that you'll ever realize that difference. Not in real life.

By the same token landholding a camera and lens is a real equalizer; a leveler of performance. It's the same as going 65 mph on a good, clean roadway. It just works. The differences between ultimate lenses and workmanlike lenses evens out and you get the shot you intended in more than enough resolution, contrast and sharpness for nearly every task that doesn't require high speeds.

It's comforting to find a lens for the interim. A system feels right when, if it's dangling by your side on its shoulder strap it begins to feel like a part of your own human system. All the stuff in the right place and nothing so showy that you draw too much attention to yourself and your photographic intentions.

That's the formula for a well balanced photographic system.

Posted by Kirk, Photographer/Writer at 09:17

Given how compact the R5 is, (I had to check that I'd picked up the right camera it's so relatively small), that's one very nice, not-in-your-face, outfit.

Say it, Kirk! I've been playing around with some smaller, mf adapted lenses on the S1 and S5. On the S5 in particular, these tiny lenses pair up nicely and make a very portable kit. But yes, you lose the af, which can be the difference between getting and not getting the shot. As for the zoom feature, I push the joystick which enables magnification of the focus area, which I can then adjust the level of magnification with the rear dial. It's not automatic as are the native lenses, but definitely makes focusing easier with the older mf lenses.

Maybe the Voigtlander APO-LANTHAR 50mm f/2 Aspherical (boy that's a mouthful)? If I were in the market for a really good 50 without going totally overboard with size and price that would be the one. Not made in L mount (yet) but they make an M mount version you could easily adapt. MF, but shouldn't be a problem for an old pro like you.

Here is one review:

He compares it favorably to the RF Canon 50 1.2L (which I have) so that's pretty high praise. If I didn't own the Canon I'd be hitting the buy button now and might do it one day anyway. If one of the mirrorless FF makers were smart they'd make a similar AF lens for their cameras.

I entirely agree, but I'm a hobbyist, not a professional photographer. For the lighter the better, and my best kit is a Fuji xe3 with the 27mm f:2.8. I add this consideration: I rarely print larger than a3, and for this the xe3 is already overkill!

So my son got treated himself to a Fuji XT4 and a couple of nice Fuji primes. He wants the video capability of the new camera. He's coming from a Canon 5d mark II. Oddly enough I've never shot with a full-frame digital camera and never with a Canon. So I borrowed his mark II with the 50mm 1.8. Let's just say I might be in love and he might not be getting his Canon back. What a lovely camera. What lovely files. The Canon look pleases me quite a bit. How nice it is to have my focal lengths back instead of some near equivalent. I can't wait to make some portraits with this combo.

Why bother using the Full Frame cameras for daily walkaround at all. Isn't that why you switched at various times to m43/ 1 inch / APS-C sensors, arguing that the quality was good enough.
I understand that for professional use or certain situations (shallow d.o.f) you may require the larger sensor but for daylight walks in one of the sunniest places in the USA why do you need anything more than your Panasonic G9 or even something like the Canon G5X mk2 which would cover your favourite focal lengths quite nicely.

To quote Dr. Evil in the movie "Austin Powers": "You just don't get it, do you Scott?"

I get to use whatever camera I want whenever I want to and they all create images that look different. That's my story and I'm sticking to it.