Say "Hello." Look people in the eye and introduce yourself. Ask politely. It's a plan.... 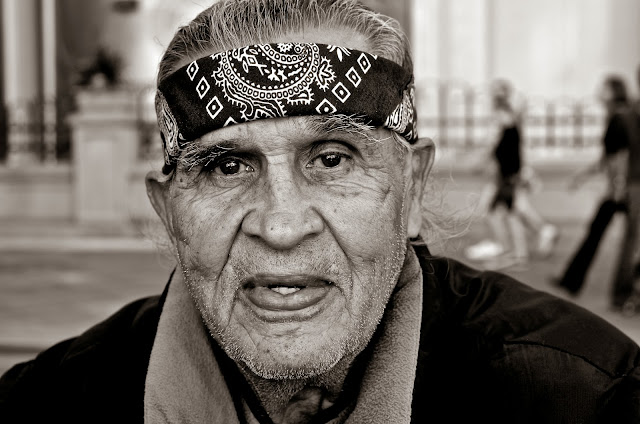 I was walking down "Mall" street in downtown Denver and I saw this man playing cards at one of the tables in the middle, park like area between the two bus lanes. At first I walked by. I was feeling a little shy. But then I realized that passing up a nice portrait because I'm becoming chicken shit will be the first step in a long flight down to the point where I'll never be able to ask again. Reticence builds on itself.

I turned around and approached the table and, when the subject and his friend at the table had a break in their conversation, I asked the man with the headscarf if I could make his portrait. I introduced myself, told him (truthfully) that photography was my hobby and that I was visiting his city and I noticed he had an interesting face. He smiled and gave me permission to continue. At that point his friend stood up and let me sit in his chair, across the little stone table from my subject. That was a very nice gesture.  It allowed me to be at eye level with my subject and I'm pretty sure that made both of us more comfortable.

These are the kinds of portraits I like to take on a full frame camera with a medium telephoto lens but I wasn't dragging a rig like that around today. Instead, I relied on my Pentax K-01 with its little 40mm 2.8 lens. I had the camera set to shoot black and white. And I'm pretty darn happy with the way the image turned out.

The entire exchange took a minute. When I'd finished I thanked him very much. Touched his jacket sleeve and told him (honestly) that he had helped to make my day better. He smiled, his friend sat back down, the deck of playing cards came back out and they resumed their game. And, at least for now, I have regained my self confidence where approaching strangers for photographs is concerned.

It's strange, when you photograph people for a living you are always in a safe zone. You've been asked to make a photograph of someone. There's a total buy in by all parties. It makes taking the images so easy and that ease makes it harder when there is no external purpose for the images. Harder when there isn't the certainty that people will say, "yes." We get too complacent when we have our subjects delivered all primed and ready. It's a good exercise to venture out into the big, wide world and learn to ask nicely again.

Posted by Kirk Tuck, Photographer/Writer at 19:12

I've recently stopped traveling to the farmers market every Saturday morning to have coffee and photograph people. Telling myself that I'm bored and have seen it too many times had stealthily replaced my approaching and meeting new people. Thanks for the diagnosis, Doc!

Photographs do moth steal the soul. They let the photographer look into it.

The last two sentences of your first paragraph make for some of the best words of wisdom I've ever read when it comes to photographing strangers.

I think that your experience in shooting people, I do not mean so much from a technical point of view but as approaching them, making a relationship with them even if in a short time, helped you a lot in this case. I like in this story how you mention the importance of his friend's gesture, being at the same eye level was for sure part of the success. Interesting, thanks
robert