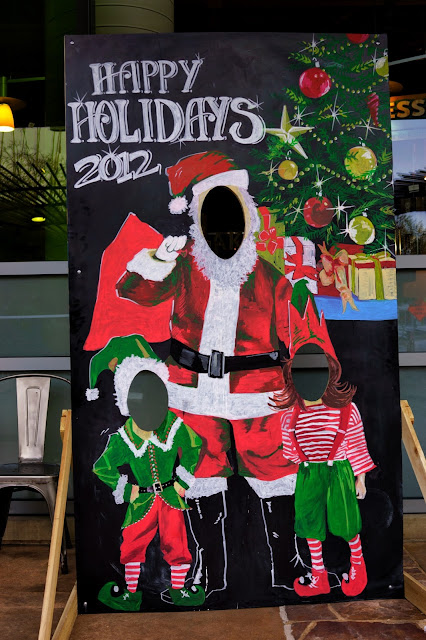 I ran by Whole Foods on Sunday to grab a cup of coffee and a berry kolache for a late afternoon snack. Just outside one of the doors they had this set up for people to take photos with. I liked it plain. Nex camera with Sigma 30mm. 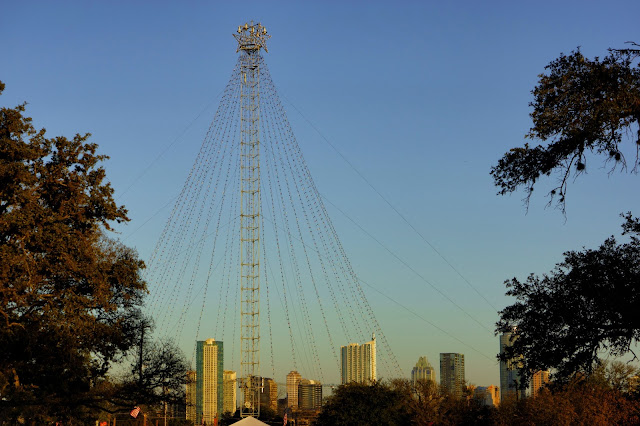 Every year since I moved to Austin in 1974 the city has used the giant "moon tower" in Zilker Park to create a giant tree of lights for the holidays. In the old days mostly students and hippies came down to frolic under the tree, spin around, get dizzy and fall to the ground. I still remember the many years when it used to get cold here for Christmas and you could see the lights through the condensation your breath would make as you spun around. Today is was 82 degrees fahrenheit at 5:33 pm, when the sun set. I snapped this series of images from just before sunset until about twenty minutes later. I love to watch the balance change between the ambient light and the lights on the "tree." 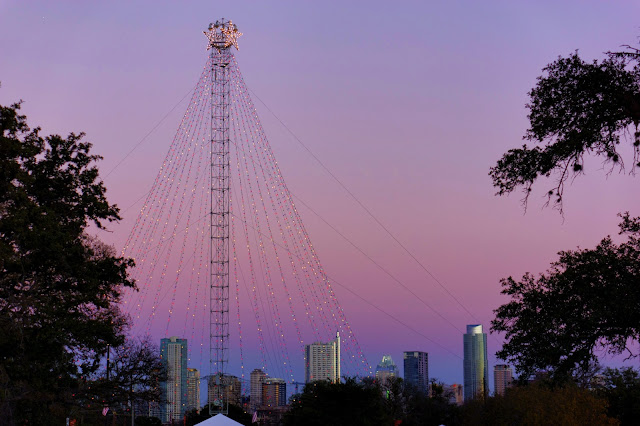 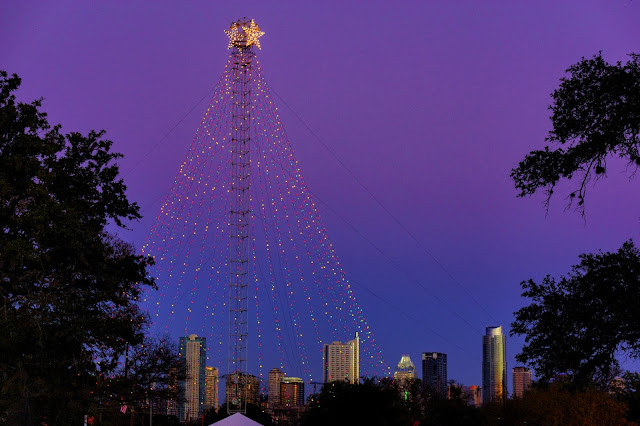 Around 6:15pm the light turned really nice and the park started to fill up with little families from all over the place. While the base of the "tree" had always been commercial free in older days it is now "serviced" by concessions. You can get home made gorditas, nachos and other Mexican fare. You can get kettle korn. And, of course you can get funnel cakes and hot chocolate. I tried the kettle korn; you could die eating this stuff. It's sugar, popcorn, way too much salt and it's popped in some oil that doesn't exist on its own in nature. But the people seemed to enjoy it and that's what counts. 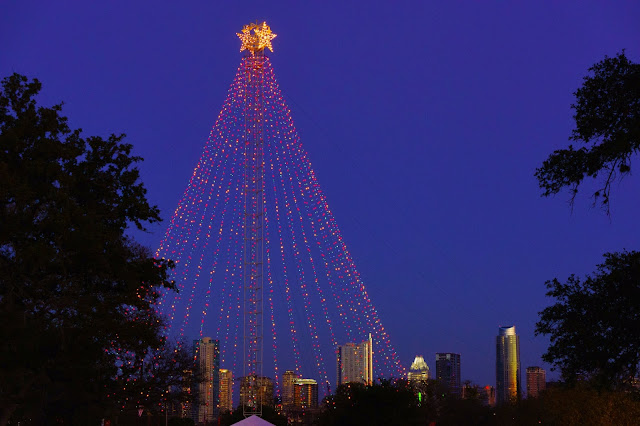 Here's my final shot from the original vantage point, of the tree. I think it's important when photographing at and around sunset to decide how you'll color manage the process. If you use AWB the camera tries to neutralize everything. If you set the camera for "sunny" you tend to get much richer blues as the sun sets completely and the color temperature shifts. That's the city skyline in the background. I blew this up and found that the image stabilization works pretty well. 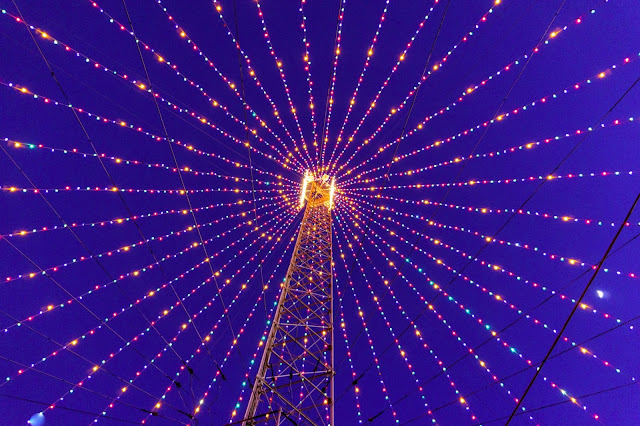 In this photograph I tried to replicate the effect of swirling under the tree but there's not enough movement in the image. Grab your monitor and spin it around really fast and you'll get a good impression of how it would have looked if you had been there enjoying the real time process. 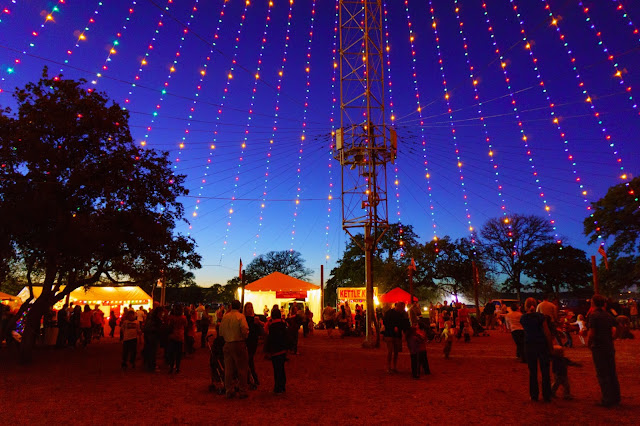 But after a while one craves a fairly well defined horizon line and this is what the action looks like under the "tree."  Once the people have enjoyed the tree lights for a while they cross the big, blocked off street and go to the other side to walk through the quarter mile long Trail of Lights.
But we've got to save something for later in the week.....

I hope that wherever you live, and whatever your beliefs, you are enjoying the year end holidays with your favorite camera in hand. From time to time you might want to put it down and actually participate. I've heard that this can be rewarding. I might try it this year.

Posted by Kirk Tuck, Photographer/Writer at 20:53

We'll be there later next week, towards the end. We're going to wait for my brother and his family to come so all the kids can enjoy it together. The same wishes for you and your family!

Would have been better with you face in the obvious place ;-) Next time take an assistant LOL. You could put the eNEX cameras in the other openings.

Nice job, Kirk! I saved a couple of these last photos to my desktop to see what the shutter speed was (to see if you hand-held these, or if you used a tripod), but I see that you stripped out the EXIF data. I did notice that your copyright says 2010... Besides my behind the scences snooping around, I really liked the sequence of the setting sunlight!

I did something similar of downtown Austin on one of my earliest blog posts last March. You can delete this link if it is not appropriate to put it here.
http://wp.me/p2bi9F-3Z

I like doing these types of sequences, and although I have done several in the past, I haven't done a single one this year. Right now is almost the perfect time of year to do it, as the sunset is so early that most of the lights in the office buildings and hotels are all still illuminated as the sky changes from blue, to twilight, to black.

All handheld. Too lazy for a tripod yesterday.

My personal favourite white balance for these sorts of situations is Tungsten when shooting lights at twilight. Makes a blue hour sky a deeper blue. Sure it isn't 'natural' but it does end up pretty.

It used to be Christmas, but well, Merry Holidays to you!

It's been Hanukkah a lot longer than it's been Christmas. And it's been the celebration of the Winter Solstice since the dawn of human memory. And let's not forget the Saturnalia, the Roman holiday that our early Christian brothers have hijacked. And long before Christ there was the holiday of Mithros, the Zoroastrian virgin birth, also on the winter solstice...

Then we have the Brumalia of the Greeks which pre-dated the Christian version of the holiday by centuries and celebrated the readiness of wine.

In fact, every major religion on the face of the earth seems to have its own Solstice celebration so I guess saying Happy Holidays is justified and perhaps a nod to the 65% of the world's population who are NOT Christian.

Let's just say "it used to the Solstice..." And merry holidays to you, whatever you choose to celebrate.