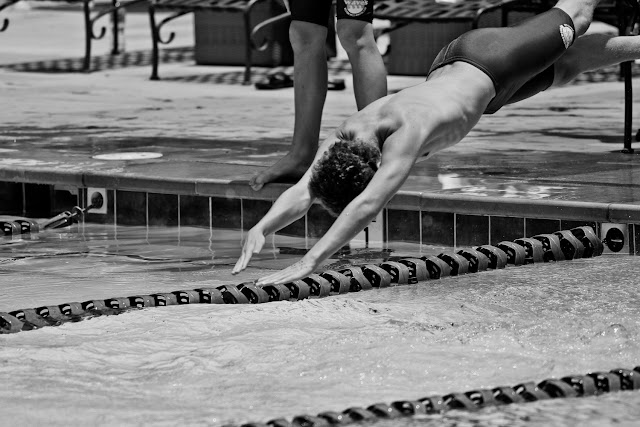 I learned long ago, on cold, dark mornings, that the hardest part of any project --- every project, is that first part where you are standing on the deck in the bitter, cold wind considering diving into the pool; the dread of embracing that first uncomfortable, wet chill, and the act of getting started.

That's what makes Summer swims more fun. It's already hot, the water is warmer, the chances of hypothermia remote. Even if you go to the early practice you're still pretty certain to start soaking up some solar-quality vitamin D before the workout is over.

I just got off the phone with a friend who is an exemplary photographer. He does it for money and he's a self-starter when commerce is involved. But he's been talking about his "art" project for so long that no one believes that he'll ever wrap his toes around the tile at the edge of the pool and launch himself. The cameras will never taste the rich nectar of something done for the challenge and not for the pay check.

There's always a reason for him to delay. He waited until full frame cameras hit the market, he waited until 20+ megapixel cameras hit the market, he didn't want to start his personal project when he was busy because he just couldn't stand to step away from the cash flow addiction. He didn't dive in when the markets and the economy tanked because he was too nervous to stray too long from his phone and his physical connection to the client space --- he feared he'd miss one of the few, stringy jobs to come through at the time.

But his project is arduous. The one he talks about. It's a globe trotting trip that seemed so do-able when he was in his forties and even his early fifties. But the project keeps being put off.  Now his left shoulder bothers him after a day of working. He's walking with a little bit of a hitch because his right knee gets a wee stiff when he sits too long. He's waiting for the situation in Greece to get straightened out. He's thinking he needs to hold onto the money his project will cost in case an emergency comes up.

Part of the trip is a walk across a couple hundred miles to go from one sea to one ocean. It's a trek that one does through the mountains, on foot. But work and family have kept him busy and the few days a month he does get out to walk he realizes that the heat bothers him much more than it did ten years ago. He's tired now. And he gets tired more easily. The idea of camping out and not having a coffee shop nearby in the mornings seems like a much bigger impediment than it every did before.

Psychologists might call this a middle aged failure to launch but I'm calling it the sneakiness of progressive entropy. And I'm pretty sure it's sneaking up on a fairly large number of my friends and will overwhelm them before they realize it.

At times such as this, when I have had yet another coffee with my friend and heard another series of plaintiff excuses for delaying his adventure yet again, I come back to my office and pluck one little book off my shelf and sit down for a quiet and short read.

The book is: Andrew Marvell. A Selection of His Finest Poems.

The poem I read is called:  To His Coy Mistress.  It is one of the first of a genre of poems referred to as Carpe Diem poetry. Translated: Seize the Day! I advise everyone who has a wonderful project in mind, but is consistently failing to launch, to stop and read the poem I've mentioned. I hope it's enough of an antidote to defeat that series of sensible spreadsheets one's mind is constantly constructing to put off anything risky, dangerous or imbued with the promise of too much fun.

The time to plunge in is while you still can. And the "sell by" date on that package is largely unknowable and unpredictable.

I have, once again, advised my friend to "Take the Plunge." Whether he will is solely up to him but each time I hear about the plans they are subtly diminished. Practicality is okay for some things. For art practicality is early death. Quit your job. Do your adventure. Write your book. Take your trip.

Let's not bury you before you've had a chance to launch yourself.
Posted by Kirk Tuck, Photographer/Writer at 14:33

Thanks for the encouragement, Kirk. Btw, the poem is online here: http://www.poetryfoundation.org/poem/173954 and the 17th century english not too hard to understand even for those who are not native speakers.

Yes, I too had and have ideas I did and do not implement. But now I have one excuse less.

Does the world need another photo adventure book? When he takes a photo in the forest, will anyone hear the snap of the shutter? Who would the professional photographer take the photos for? Other photographers? Mankind? Are such goals possible for a grown man? It is more than the fear of the unknown that keeps your photographer at home.

The absolute greatest thing about being young is believing what you do matters. In being able to go out and make friends, instead of lose them. If only we could bottle and save that.

In short, it is selfish for a man to leave his family and friends on an adventure. We're all selfish, of course, so nothing wrong with your photographer taking the adventure. My guess is that, as sad as it may be, he would rather tell you about his adventure, than take it. He would rather help the small client with photo for $25, then take a photo for the world on spec.

There is no cure for getting old. So easy to become a bitter old man. The story isn't the (selfish) adventure your photographer didn't take, it's the (giving) work he continues to do on a busted knee!

Absolutely right about art and practicality. My favourite poet, Charles Bukowski, lived a life of poverty and long stretches of homelessness and unemployment, temporary jobs and the like. He needed to write, so that's where his efforts went and he suffered what he had to suffer to do it. Art doesn't pay the mortgage, so you have to make a choice. Here is his poem So You Wanna Be a Writer:

So You Want To Be A Writer

if you first have to read it to your wife
or your girlfriend or your boyfriend
or your parents or to anybody at all,
you're not ready.

don't be like so many writers,
don't be like so many thousands of
people who call themselves writers,
don't be dull and boring and
pretentious, don't be consumed with self-
love.
the libraries of the world have
yawned themselves to
sleep
over your kind.
don't add to that.
don't do it.
unless it comes out of
your soul like a rocket,
unless being still would
drive you to madness or
suicide or murder,
don't do it.
unless the sun inside you is
burning your gut,
don't do it.

when it is truly time,
and if you have been chosen,
it will do it by
itself and it will keep on doing it
until you die or it dies in you.

there is no other way.

and there never was.

This reminds me of a book I read, which if my memory is not fooling with me is a book you talked about either on your blog or on a flickr forum many years ago called "The War Of Art" by Steven Pressfield. It's about Resistance. That insidious thing that keeps you from starting that creative thing you want to do. Maybe dropping him off a copy will give him the friendly shove from a friend into the pool that he needs. I really like that book, and if it really was you that made the recommendation... Thank you!

Kirk, you may not remember this, but I sat with you in a downtown coffee shop about five years ago talking about the same thing. Initially, you told me to leave my good paying job at that time was a little nuts (we were still in the grasp of the recession). But, by the end of the conversation, you said something to the effect of, "You know, you could stay at your job and be okay, or you could go out on your own and have some really great stories to tell. Wouldn't that be more interesting?"

I never forgot that conversation, or that particular comment. It took me about five years after that to start compiling my stories, but I'm doing that right now. I don't regret it one bit. I don't always know where the next paycheck is coming from, but I'm paying my bills and feeling a lot less like my soul is being sucked dry.

Anyway, I hope you're able to counsel your friend through his fear or reluctance. Life's too short.

The War of Art is a great thought. I bought this book after reading Kirk's recommendation for it. It is a fairly quick and easy read that makes some valid points on the creative process.