The Attraction of Exuberant Youth. 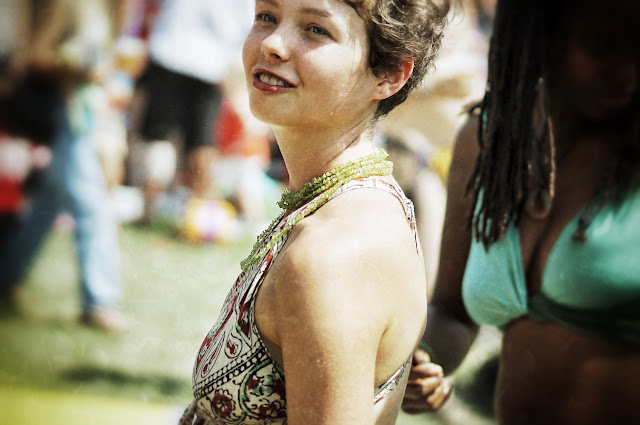 I find it fascinating how we collectively lie about aging.  I hear 50+ year old people say all the time, "I would never want to be 18 again.  Who would want to go through all that drama again?  I hated xyz when I was that age...."

They are all liars. There is nothing wonderful and engaging about growing older in a young person's culture except for the wonderful fact of still being alive.  And the exuberance of youth is more powerful and captivating than any narcotic.

There's a cultural event here in Austin that happens every year around this time.  It's called Eeyore's birthday party.  It's held in Pease Park which is in the very center of Austin, just down the hill from the University of Texas at Austin.  It started out as a whimsical party, a playful Bacchanal to celebrate the arrival of Spring.  That was decades ago. Now it's evolved into an "event."  The city at large justifies its existence as a fund raising avenue for non-profit organizations.  The non-profits can put up booths for the event and sell food and drinks and even beer. And like every other event that gets "co-opted" and grows beyond it's "magical" borders it gets homogenized and watered down.

But I go every year because its vapors and its energy represent the core identity of an Austin that really did exist before the encroachment of the anything for a buck crowd.  In fact, I would say that if you never go, and let yourself go, to the little remnants of fun that remind us of Austin in freer and more fanciful days then you are either part of the problem or you are a cultural coward.

It's true that the event has devolved from a happening that attracted college professors, beautiful and handsome college students and counterculture people from the center of Austin into a blue collar tourist attraction.  For the last few years the ratio of people in costume who fully embrace the concept of Eeyore's Birthday Party (from the Winnie the Pooh stories) to the beer drunk voyeurs who come to catch a glimpse of the half nekkid hippy girls has become woefully skewed to the wrong side of the equation.  Now there are many more lugs with backward facing ball caps and big beer bellies than there are people in the drumming circles and around the May Pole.

The truth is that the hapless gawkers are only symptomatic of the two real issues that sap the magic from events like these.  The first is the parabola of popularity wherein a fashion, an event or even a city dies from the weight and momentum of its own popularity.  Start a conference or a concert series or anything like it and every year it grows larger and more unwieldy.  The core managers are replaced with groups that have tangential and divergent interests from the original concept. Traffic gets worse.  Everything gets crowded and eventually the whole process becomes little more than 90% crowd management and 10% substance.  Getting enough bottled water to the location to prevent death crowds out concerns about the look, feel and experience.

The second issue is the same that effects us all.  Every event ages.  Every event grows old.  The average age of participants at Eeyore's birthday party seems to have risen from late teens and early twenties (not too many years ago) to mid to late thirties now.  The party is growing old.  People bring folding camp chairs and frantically stake out shaded territory.  They are immobile.  They are nearly all huge.  They crowd the landscape with ice chests.

Ah. To be young again in a younger world.  To be able to freeze a great collective experience in life in a block of lucite and to be able to visit it from time to time and revel in its unchanging glory.  That's the implicit promise of youth.  And the realization that it can never be is part of the bitterness of getting old. How can a older photographer not crave the power, the endurance and the curiosity of youth?  But there is no question of giving up.

Gear notes:  I spent five or six hours at Eeyore's Birthday Party, yesterday.  I took one camera and one lens. It seems to me that this kind of  slender inventory is what the universe intends for these kinds of events. Anything more separates you from the crowds.  Anything more slows you down and fights for your attention. Any more choice makes you lazy.  I used a Sony a57 camera and the lens that is quickly becoming my favorite, the 85mm 2.8.  The total package is small and light and extremely photographic.  I cheated and put an extra battery in my pocket, just in case.  I needn't have bothered, the camera and I took 1200+ exposures and returned home with 33% left on the battery gauge.  Far better than the online specs would suggest...
Posted by Kirk Tuck, Photographer/Writer at 15:02

As someone who has been in the world for a full 60 years now, I do understand your point of view. There is no denying the attraction of robust, hormone drenched, youthful vigor!

At the same time, too often, that incredible vivacity, speed and strength causes younger people to fall into the traps of ego, hubris, and narrow perception. Older folks are not immune, in fact, many who fell into those traps in their younger years simply become more deeply entrenched as they get older. :)

Life provides us with many opportunities to awaken from our various illusions. One of those opportunities comes when we discover that we can no longer run as fast, jump as high, or dance as lightly as we once did. It gives us the opportunity to really pay attention to life. I mean paying full attention to the tingling vibrant life that is still within us. A tree is just as much alive as the squirrel. The tree just does a bit less jumping. The speed of life does not determine its value. The strength of body does not diminish the bliss of being alive.

Life is a constant series of adaptations, but the "you" that looks out upon the world today is the same "you" that was borne into it. The "personality" has learned new things, developed many tricks to swim more effectively through life, but the essential "you" that is aware of all that is unchanged.

On a more practical note: As I have gotten older, I have discovered some wonderful adaptations that help me immensely in the practical world. A vegetarian diet, combined with amino acid protein powders and vitamins,has revitalized my muscle strength.(many amino acid powders are derived from animals, but I chose my diet for health reasons, not politics). A few years ago, I looked much older than my physical age. Now people have trouble believing that I am 60. Please keep in mind that this was not my goal. I just wanted to feel healthy.

The last bit of unwanted advice will be difficult to swallow. Excessive caffeine use depletes neurotransmitters in the brain, causing emotional shifts. Ever since I started taking supplements to boost neurotransmitters while simultaneously reducing caffeine, I have felt tremendously better.

You don't have to eliminate caffeine, but things probably do need to shift around for you, if you are at all like me with your physiology. I would recommend that you find yourself a local expert in such matters (rather than listen to some crazy person on the Internet).

All is not lost, it is just changing.

Given the chance, I'd be 18 again in a split second. But only if I were allowed to know then what I know now.