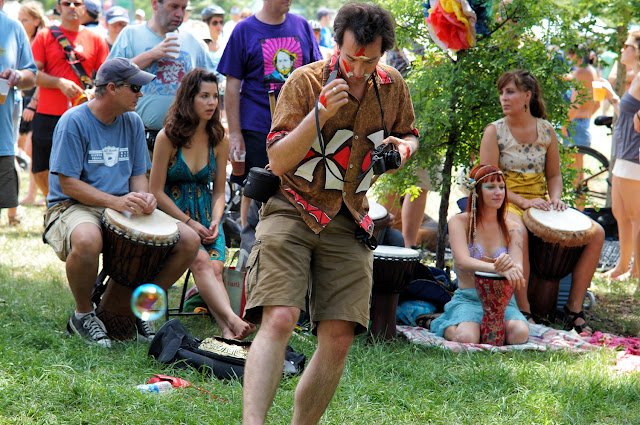 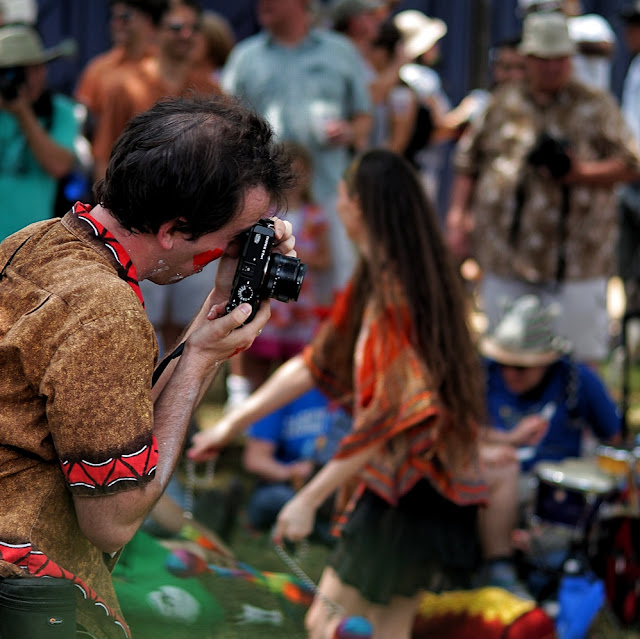 I had three sightings of Fuji's new, super deluxe, faux rangefinder camera, the Pro-1x at Eeyore's Birthday party yesterday.  I was impressed by the look of the bodies and the wonderful, retro, panache of the engraved white letters.  The body seems to be the right size and have the right look.  Time will tell if the images do the overall design justice.

My most joyful encounter of a new Fuji and its owner was near the main drum circle at the party.  There is generally an inner core of uninhibited dancers, surrounded all around by a diverse group of drummers who quickly get into unison and continue throughout the day.  Drummers come early and leave sporadically only to be replaced by new drummers.

There's an unwritten social rule at Eeyore's, that's been observed for decades, that the only people in the dance circle are people.......dancing.  And it's honored by most photographers, most of the time.  This year there was one lumbering brute with a camera who shoved his way in among the dancers and catatonically photographed them for, literally, hours.  But most people get that there is an ethical line you shouldn't step over.  The exception is for people like our hero above who bring their cameras into the circle and dance with exuberance.

I never caught this guy's name but we showed up early, when things were just getting started.  I noticed his camera because I am a camera nerd.  We all are. That's the nature of people who read this blog.  Anyway, he was standing on the outside of the circle snapping a few photos of the few dancers who were getting started.  Next thing I knew he kicked his shoes off and entered the circle, camera sometimes strapped across his body, sometimes in his hands, and he danced and danced with abandon.  Occasionally he would stop to catch his breath and catch a few frames but for the most part he spent the better part of several hours in rhythmic movement.  Who could begrudge him a few well earned frames from the inner circle?

Posted by Kirk Tuck, Photographer/Writer at 15:31

I assume you took this with your Sony? Good color, good sharpness. Also, it appears you focused on the camera. In the future, I am sure Sony or Olympus will offer this as one of their settings. No one will know what "camera priority" means unless they break down and read the manual.

The Sony's already have: Pretty girl priority, wonderful repeating pattern priority, photogenic lunch priority and many more settings. The most popular one is: Smiling baby priority.

From what I've read about the PRO, I doubt the photographer was able to focus on his subject. It doesn't appear that would matter to him though.

The guy with the Fuji certainly has an interesting shooting style, using his thumb to press the shutter release. Each to their own I suppose.

It's amazing how I can get nicely focused street shots out of my XPro, when it's widely known by people who've read about it on the Internet that's it's incapable of focusing without bursting into flames.