Finally. Kirk stops horsing around with dumb format philosophizing and puts up something useful. It's about time. "How to keep your camera comfortable." 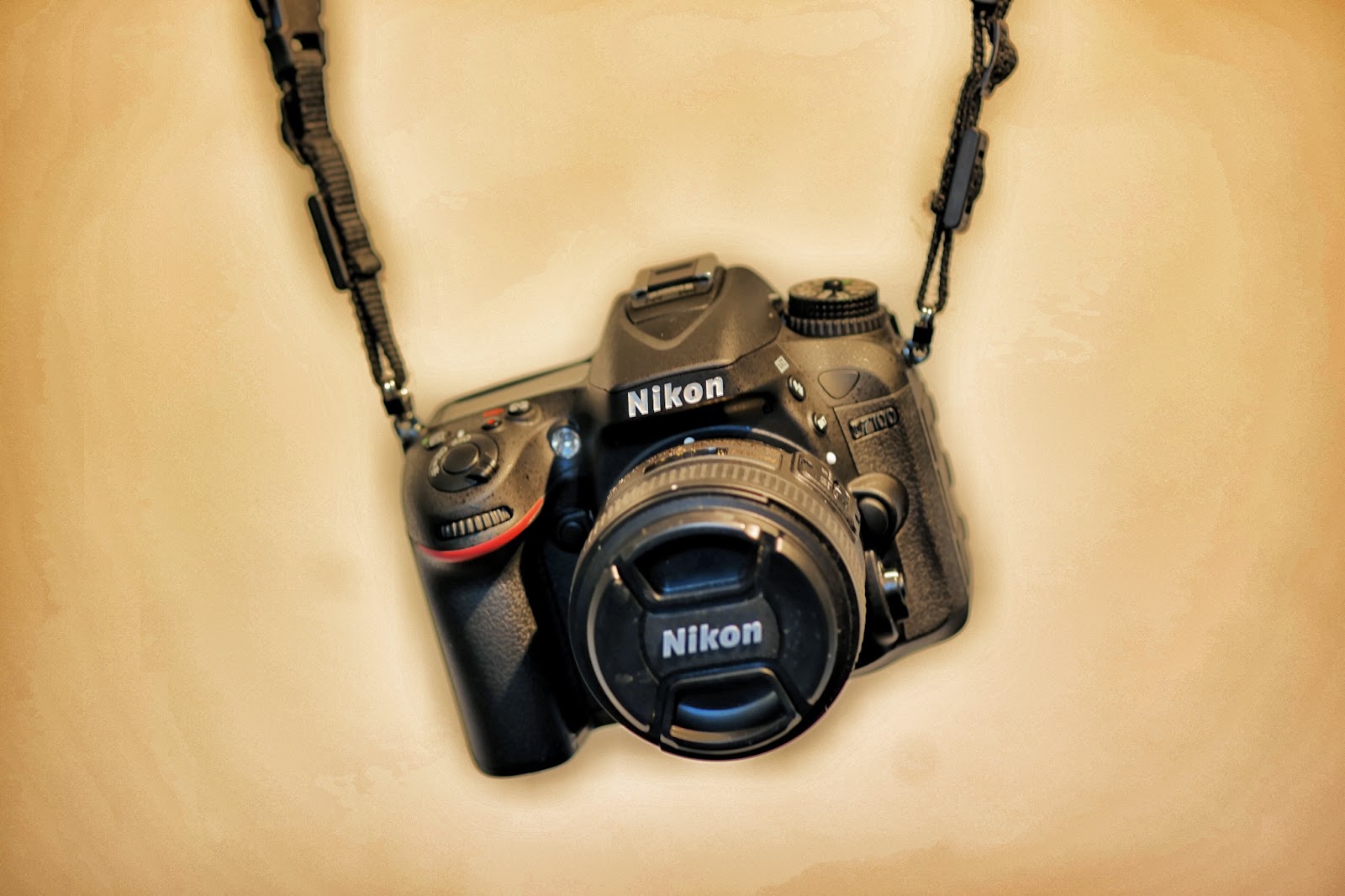 I'm tired of thinking about camera sensors and arguments about why one format is better than another. I know it doesn't really matter because no matter what anyone else says I'll still go on shooting some stuff with tiny cameras and other stuff with big cameras and I'll use all the stuff in the middle too. I decided that this morning I really just wanted to share a stupid idea that came to me yesterday afternoon. I know it's painfully obvious but I just figured it out right then.

Let me set the stage:  It's about a hundred and one outside yesterday afternoon around 3:30. It's not the pleasant, desiccating, dry heat that the people in Phoenix get to enjoy. This is Austin humid/heat. We had some nice rain last week and when the sun amped up the humidity came along for the ride. Anyway, it's hot and a little uncomfortable outside unless you happen to be in a pool. Or on the lake.
I was playing with a different camera and lens and I decided it would be fun to go out and walk around the lake and try to get some great Summer shots. You know, people on paddle boards, people in swan boats, people in skimpy swimwear, crazy people running in the heat, kayakers, canoe enthusiasts, etc. And I knew all of them would be out in the afternoon.

I grabbed a camera and headed to the downtown hike and bike trail that surrounds the lake. I also grabbed a little scarf-like thing thinking I would soak it with cold water and wear it around my neck as a tool for evaporative cooling. I buy these stretchy cloth things from REI for just that reason. They also come in handy in the winter. I wear one over my mouth when I run in the cold to warm up the air before it hits my lungs.  The ones I buy are from a company called, Buff. They are essentially a big rectangle of cloth that's sewn on on side to create a tube. You can roll them up as in the image just below and wear them around your neck or your forehead or you can unroll them and adapt them in other ways. 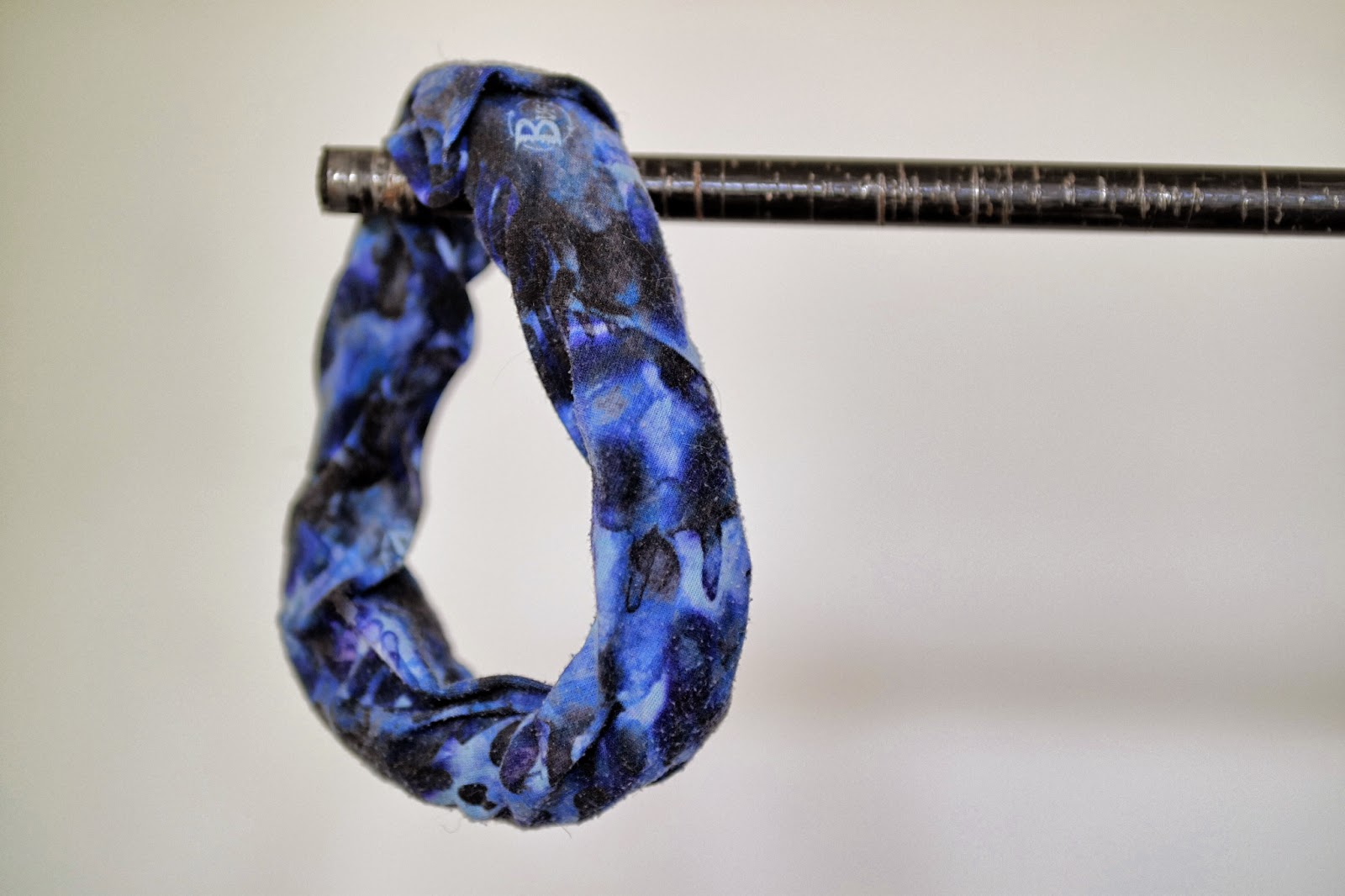 Buff cloth, rolled up and ready for neck ware. 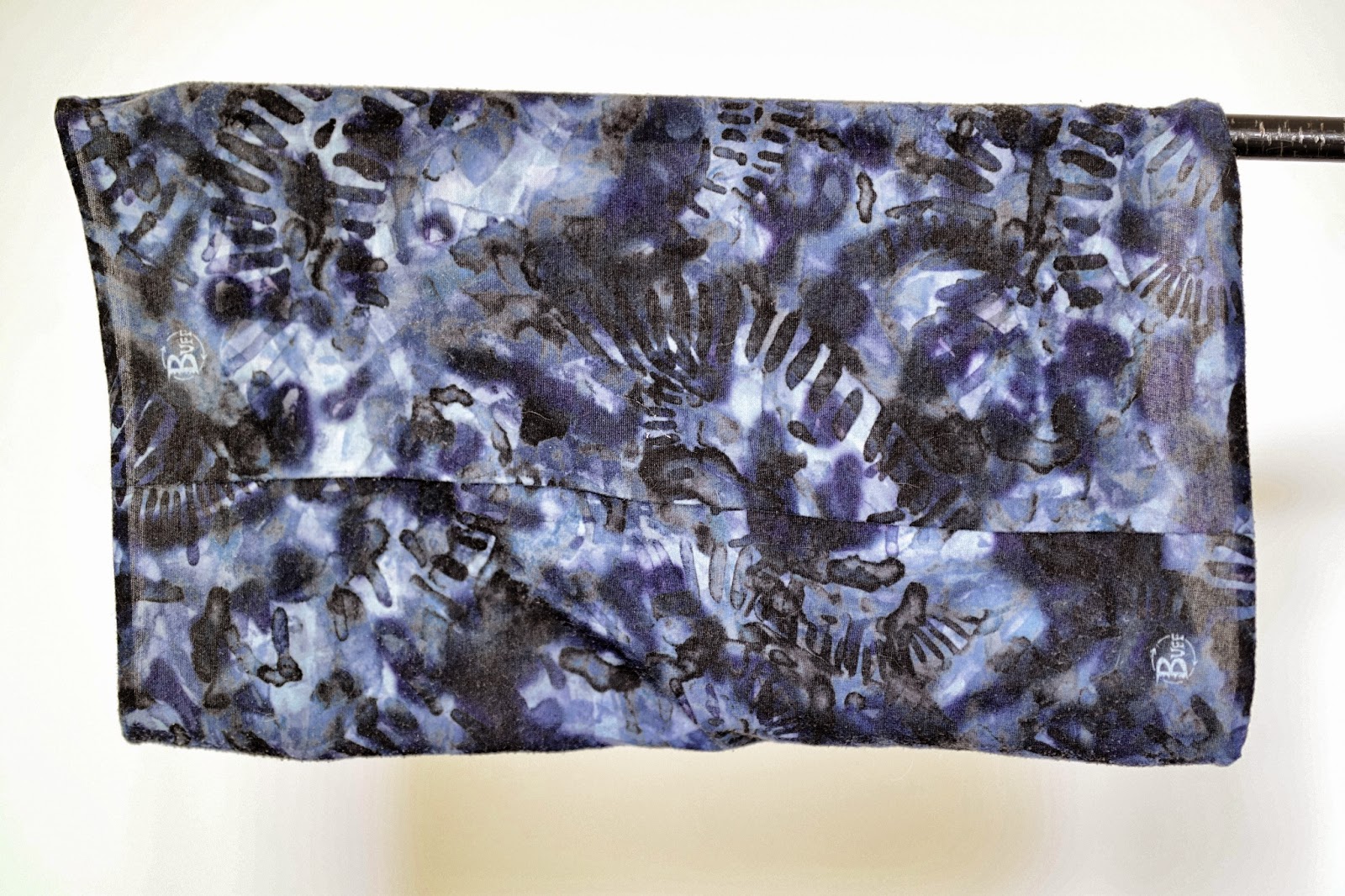 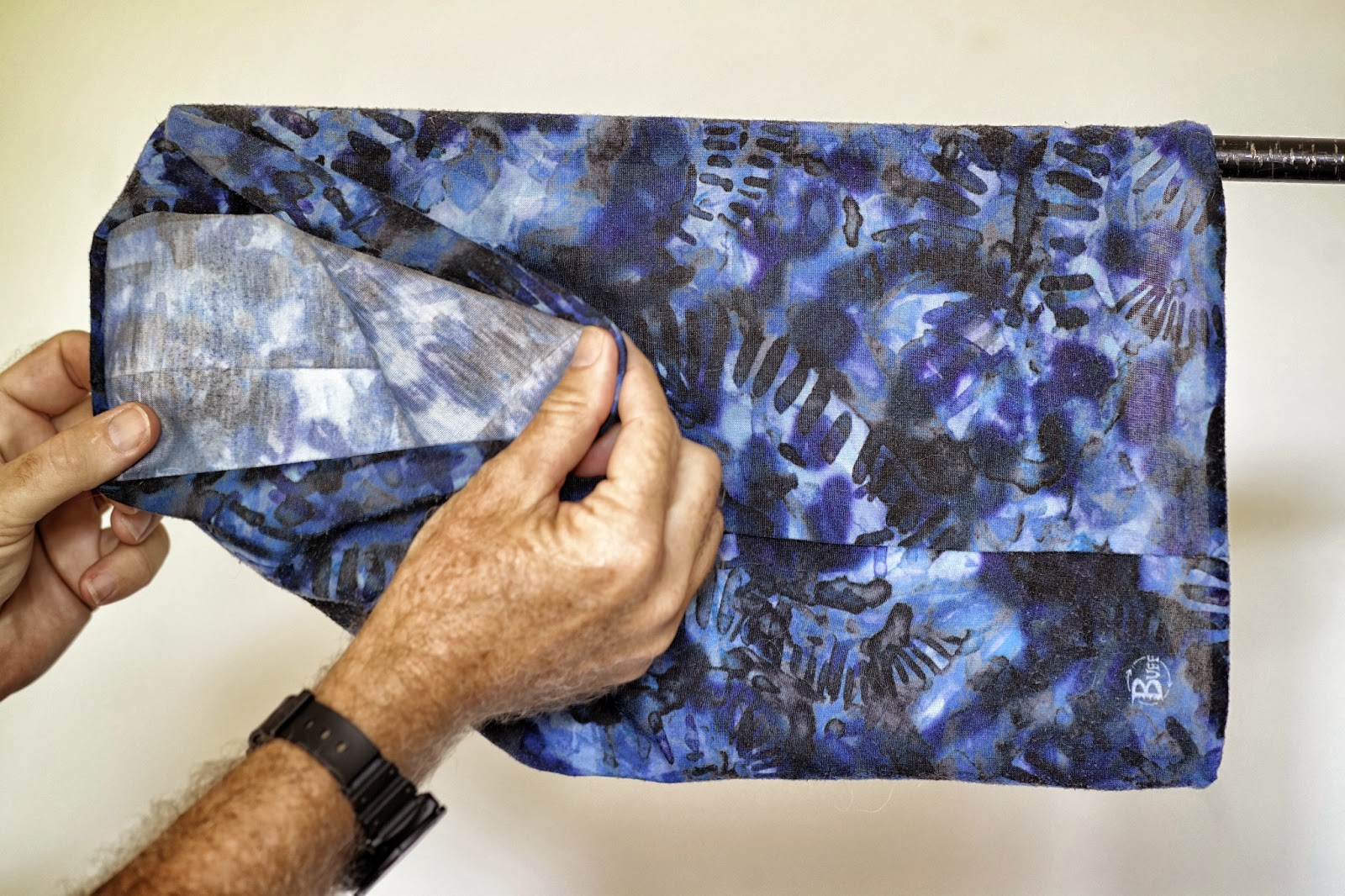 And this gives you an idea of the construction. It's just like a ski gaiter.

So, I start walking. Now I've got on my sunscreen and a good hat and a pair of cool sunglasses but I look down at the camera dangling off my left shoulder and I realize a couple of things about dragging a camera around in a hot climate. First of all most of the cameras I use are black and even the least knowledgeable among us know that black soaks up heat instead of reflecting it. We also know that heat messes stuff up. While it might not cause lasting damage to a camera using one with a core temperature over 104 is woking outside the expressed operating range. That might cause the lubricants to get a bit more lubricant-y than intended and the increased temperature might cause more noise in your videos or image files.

The next thing I realize is that I'm grabbing the camera with my sweaty, drippy hands and that salt water in the form of sweat is almost certainly not good for the exterior of the camera or the little control knobs and what not. Even with total disregard for the health of the camera I had a moment of selfish satori as I realized that the camera would be harder for me to handle when wet and/or sticky. What I have over my shoulder is a precision instrument baking in the sun and exposed to caustic chemistry every time I handle it.

Now I'm beginning to understand the rationale of those leather, ever ready cases that were somewhat popular many years ago. Of course you could always pop the camera into a camera bag or into a backpack but then you've made it many steps more difficult to access the camera when inspiration strikes you. I wanted my camera somewhat protected by easily grab-able.  Just in case inspiration does strike a glancing blow...

At some point my brain finally engaged and I grabbed the Buff cloth out of my pocket (not yet soaked or soiled), unhooked one side of the camera's strap and slide the cloth "tube" over the strap. 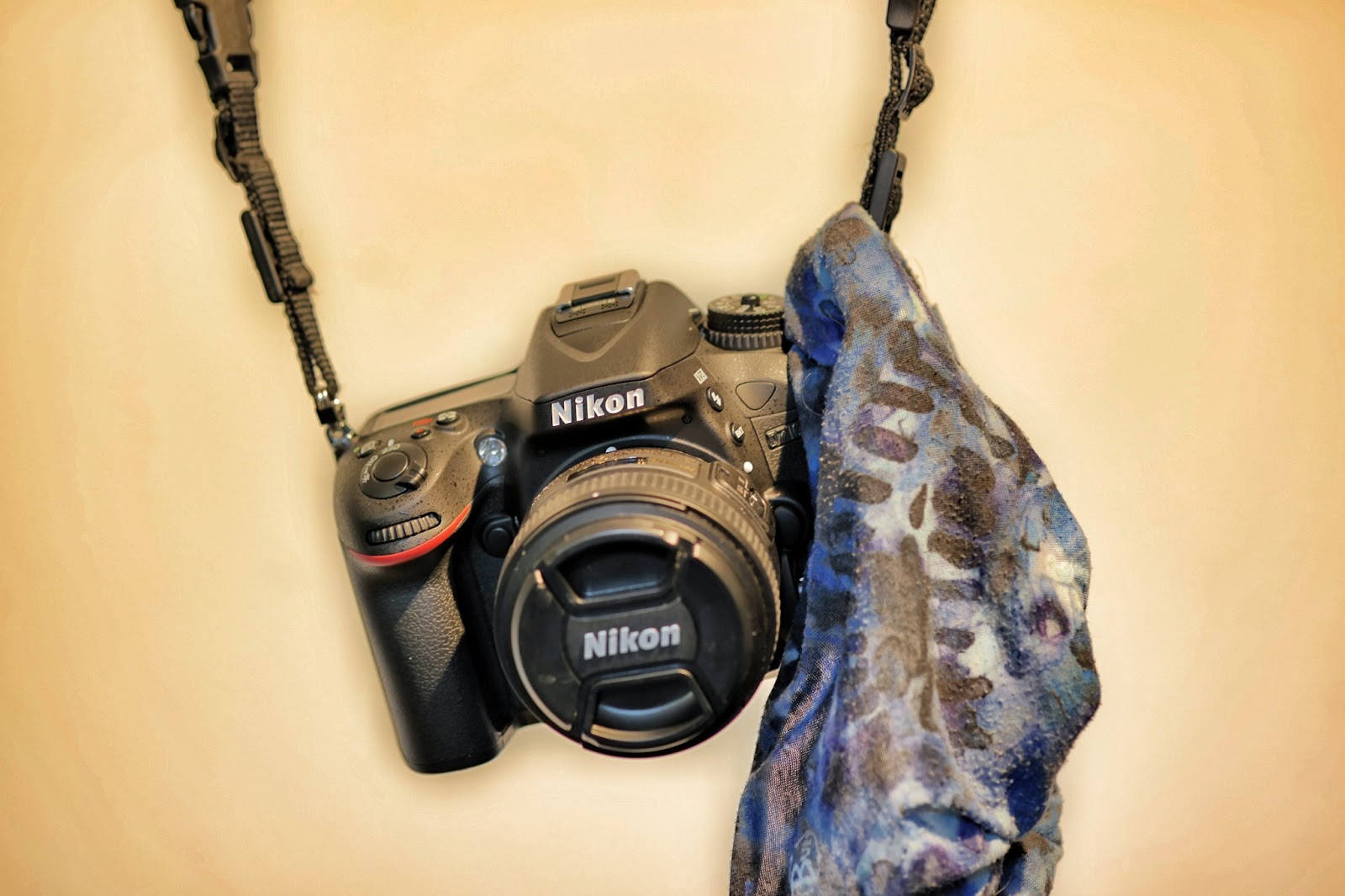 When I am using my camera the cloth can hang over to one side. It's right there when I need to wipe the sweat off my hands or my forehead but it's small enough and soft enough to be totally out of the way for shooting. I could easily flick it around to the neck area of the strap and use it as an extra cushion there while shooting. 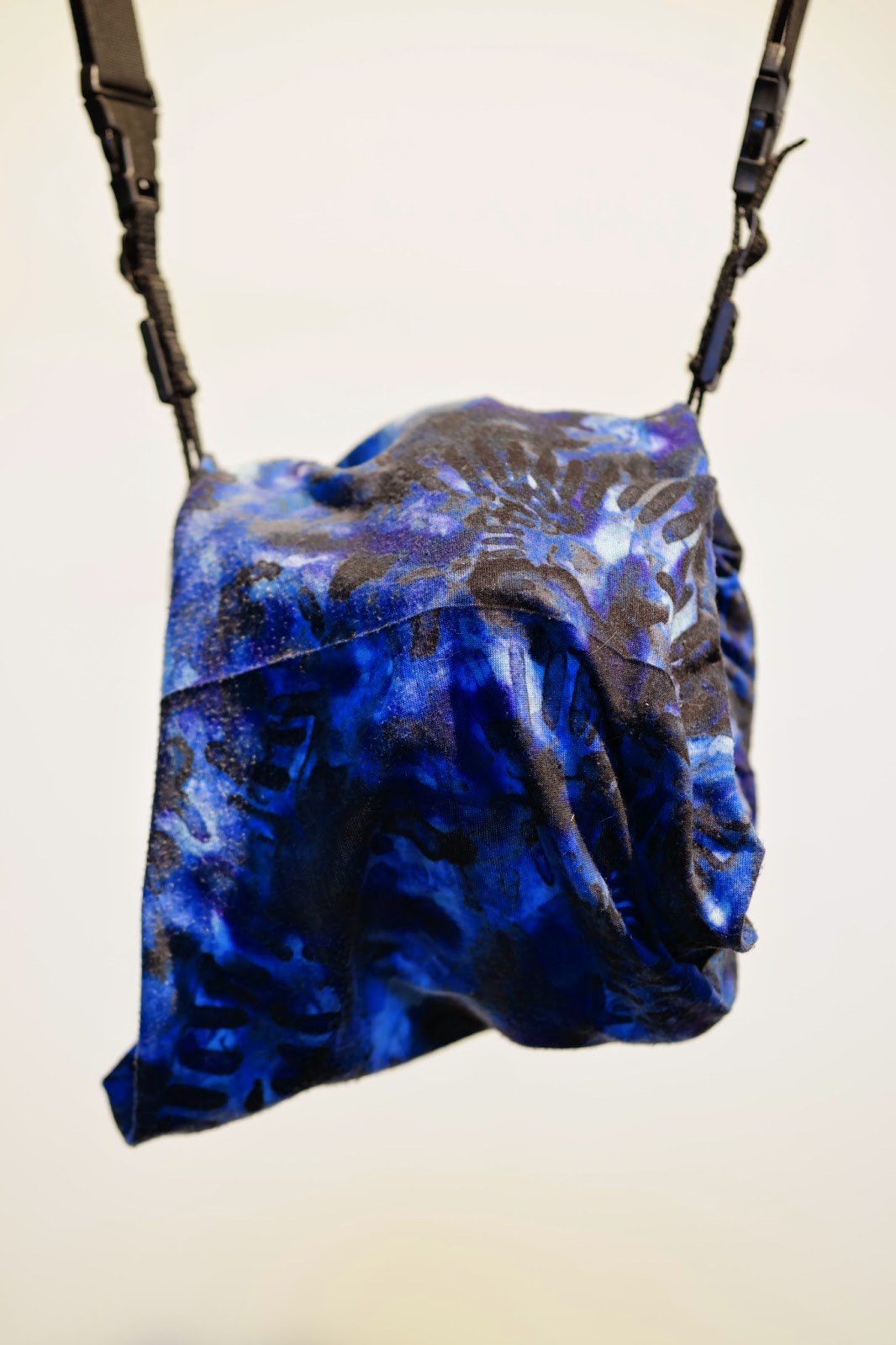 After I've seen and photographed whatever masterpiece scene that caught my eye the cloth can slide quickly over the camera and lens (works best with short to medium sized lenses---all bets off with the 300mm 2.8) to protect them from heat, some infra-red radiation, dust and body delivered moisture. As an added bonus the cloth covering also keeps the rear screen of the camera from rubbing against a grommet or belt or anything that might abrade or scratch it. 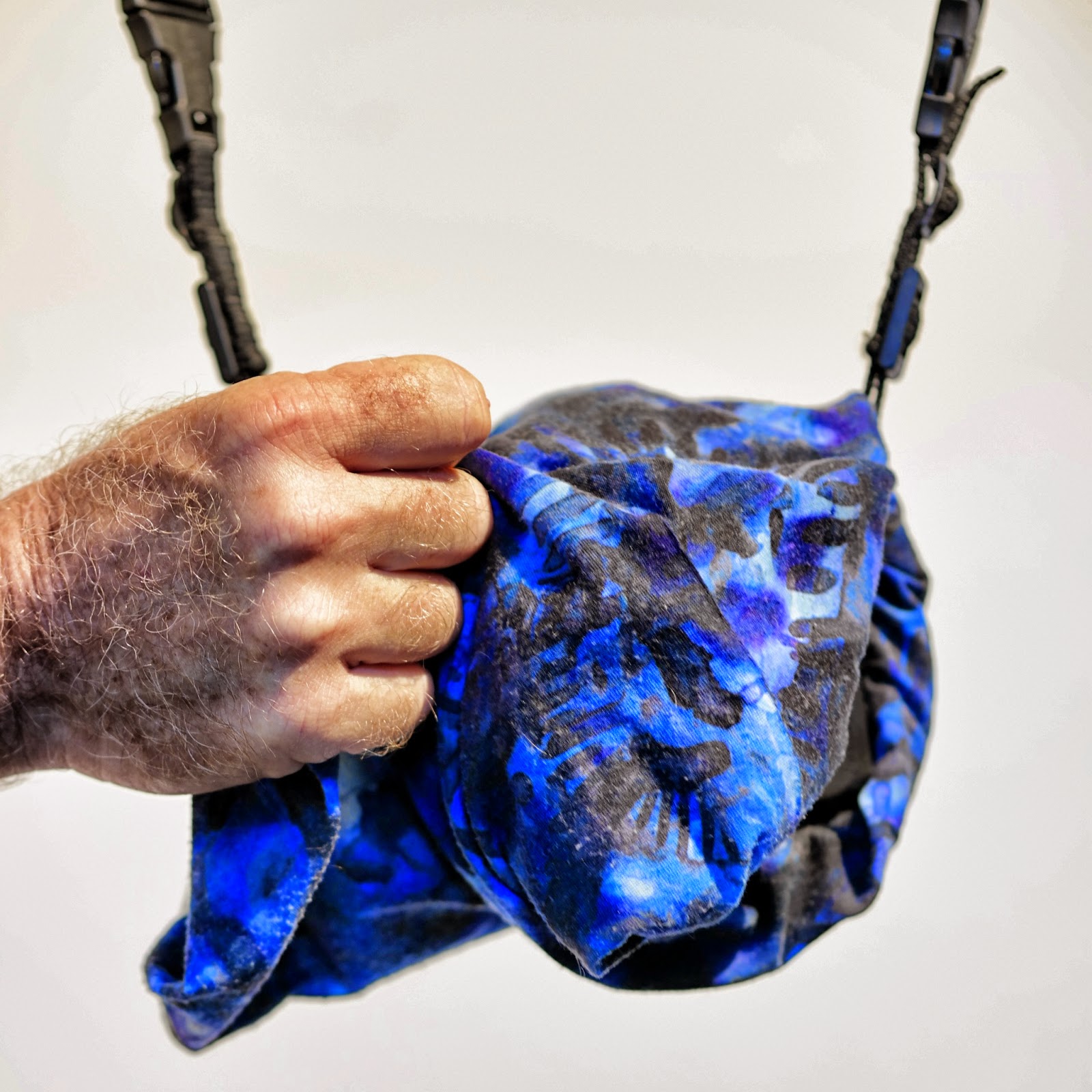 It works well for me in the heat. I can grab the cloth and wipe my hands before getting to the camera and it was satisfying to have it well wrapped in the cloth tube when a couple of frenetic mountain bikers came careening around the trail, kicking up clouds of dust. So, this is my hot weather "ever ready" case for cameras and camera operators who like to go out for hours in the direct sunlight. I know it's probably an obvious thing to most of you but I had never seen other examples while out in the urban wilds.

If you don't live in Austin you don't have to get the tie-dye version you can get a different pattern and color. In fact, I don't sell these and don't have a link to a resource but if you have access to a sewing machine and a fabric store I'm going to guess that this is a short, sweet project that won't call for six sigma production skills.

Have fun. Stay cool and be sure to make or buy one of these scarfs for yourself. It's a bit of Bedouin or National Geographic chic on the cheap. And your camera might thank you for it.

Well, that's my current attempt to raise the blog to the level of "useful." Hope you enjoyed it. :-)

Posted by Kirk, Photographer/Writer at 11:18

I think you might be the first person on earth to have a clear and sharp picture of Sasquatch. At least from his big hairy hand.

Awesome tip. I'm in SoCal and do a lot of hikes on dusty trails. This is a great idea to keep the dust to a minimum. Thanks.

"I know it's probably an obvious thing to most of you but I had never seen other examples while out in the urban wilds."

Yeah, it is, at least to the bikers and skiers among us. Buff is probably the best known maker of that particular head/neckwear, and there are indeed a lot of uses for it. One of the visually pleasing ways I've seen is young women using one as a top... ahem.

Anyway, there are other makers, too, but Buff has become the popular term to call the piece of highly flexible tube of cloth, whichever brand it is.
I've got two Buffs and another of different brand, the classic orange and black Buff being my favourite.

I see a Nikon in this article. I'm losing track of what you are shooting: Panasonic, Samsung, Nikon, Sony, Olympus. All of them? It all sounds very photographically democratic to me. [smile]

Always interesting how climate perceptions depend on acclimatization. I always look forward to visiting family in Austin because, compared to Baton Rouge, it feels like the Gobi desert. But I remember when folks from Denver relocated there for the semiconductor business and thought they had moved to the swamps.

This looks like a smart idea for those of us in the swamps.

I'm glad we're on to something that matters. Because I just got a new D810 last week and you weren't doing a good job at confirming my biases.

In all seriousness, I love both my small cameras and my new big one. They all take amazing photos. I was thinking the other day how amazing even the lower end gear is now days. It's a good time to acquire new gear. It's an even better time to use it.

Paul, You best get one of those Buff things right away. It's dusty up in Oklahoma and that camera need to be treated right.

All cameras welcome on this blog. Sometimes through five or ten rotations.