An overdue Sunday walk helps reinforce a sense of place. Regardless of which amazing camera you choose. 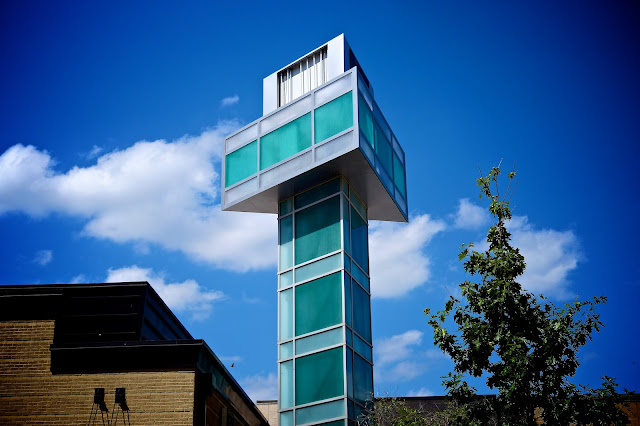 You purist out there are going to hate me for this but for the last week I've gotten stuck on a silly, post processing mode in Aperture that Apple calls "Toy Camera." It ramps up the contrast and saturation of an image and then applies a whopping big dose of vignette. I think I started playing with it because my images were looking meek and soft and I wanted to experiment with a more, "in your face style." I'm sure I'll get over it and go back to my flatter and less frantic post processing.

I spent my week doing portraits (stills) and interviews (video) and I was ready for some "non-human" photography time. Many people seem to think that cityscapes are boring unless you do them in one of the "great capitols" where imposing, august and intimidating buildings that were made many years ago live. Cities as populated with interesting architecture the way Palm Springs is populated with golfers (and from time to time, photographers...).  I might agree with that assessment if my goal was to catalog and show off the architectural achievements of my fair city but in fact I walk and photograph to reinforce my sense of place. I see the city as constantly growing and changing. Not always for the better but not always badly. Having a mental image of what local places look like gives me some sort of comfort that I find hard to explain.

On the day of this walk I took the (relatively) new Sony a58 and the muscular 16-50mm f2.8 lens with me. I like the camera just fine but I love the lens. And I love it even better when I watch through the electronic finder after I take the shot and watch the camera's processor apply the corrections in it's little memory banks to the image. The lines straighten out and the corners lighten up. But then I just mess it up again in post processing with my Toy Camera Mania. 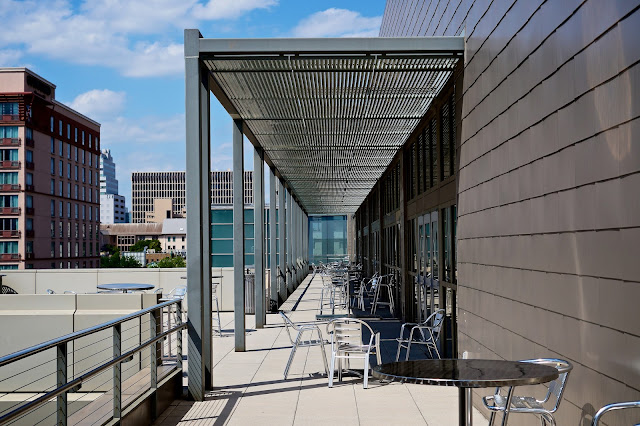 I spent all week in the studio so when I went out I looked for all the places where the central Texas sun does it's hot, bright, bully light all over everything. The images above and below were taken up on the third level of the Austin Convention Center. Interesting thing, the ACC is open every time I go there. Whether they are having a car show or meeting or nothing at all the building seems constantly accessible to me. Given the long halls with flooding sunlight and all the blandly interesting post modernist touches I am amazed that it's not full of film students doing guerilla photo shoots, without permission or permits. At the very least some exploratory fashion photography? Whatever. But the bathrooms are convenient and the water fountains are cold. 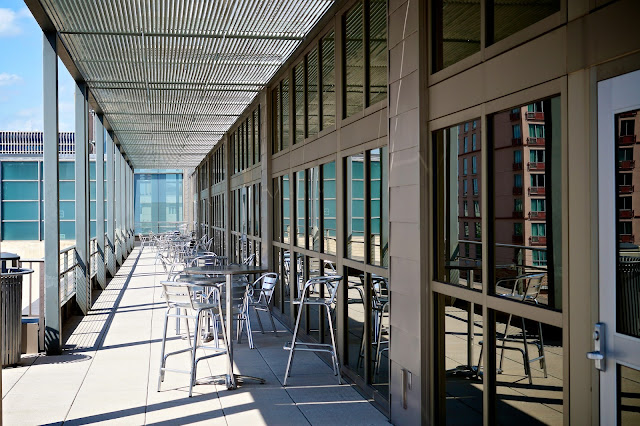 One benefit of keeping track of a city center growing like a weed is knowing which locations you want to put in the background of a location portrait and what the best time of day is to make it happen well. 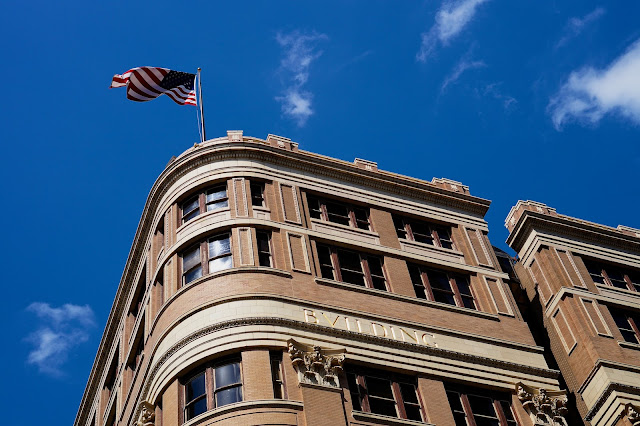 Our downtown never seems to sleep. There are multiple art and music festivals just about every weekend, and something like 120 music/night clubs in a one and a half mile strip. The problem for diurnal shooters like me is that most of the big events take place outside, during the day. The sun is harsh on faces  but looks great on buildings. I guess I need to go out later and haunt the few interior venues with interesting interior light.... 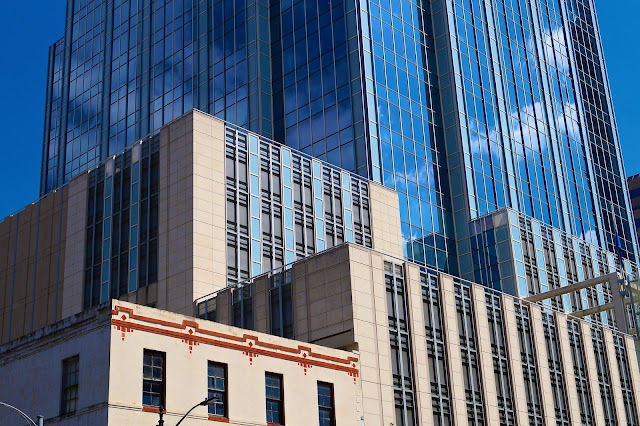 I like walking the city with a small camera and a good lens because it allows me to get seriously good images when I see them while making a casual and lightweight enough package so that it feels as though it's just along for the ride. If I don't find anything to shoot then no big deal.

Okay, I think I'm over my "toy camera" phase. Just had to get it out of my system...

Posted by Kirk Tuck, Photographer/Writer at 20:59

Them ain't no toy photos; them are great, fascinating photographs.

Yours from Independence, CA.

I'm having a ball with my little Olympus EPM2. Great quality out of a pint size camera. Sometimes I'll use the bracket feature on it's art filters and after shooting it will give me one version of every art filter. Pretty cool but in the end it all gets gimmicky and I just go back to raw.

I darken the corners on most of my photos. I also subtly darken bright things near the edges. Ansel Adams said that almost all photos needed to corners darkened by about 5%. It's a visual trick to help keep the eye in the central part of the image because lighter areas tend to attract our attention. As for the purists? To heck with them. It's your photo. Make it look the way you want.

That first photo is very interesting to me. I don't know why I've gone back to look at it several times now, but I have. Don't know where that building is, but I'll be on the lookout for it. Thanks for the info on the restrooms at the Convention Center. THAT can really be handy to know!

I don't get a chance to do these types of walks too often. When I do I usually walk around a nature park that is next to the housing complex I live in. My subjects tend to be trees, plants, and birds rather than buildings. But the walking and picture taking helps to make me relaxed and peaceful. And I do agree with others - they're your pictures, so do what you want with them. I use Aperture, but have never used the Toy Camera setting. I'll have to check it out.