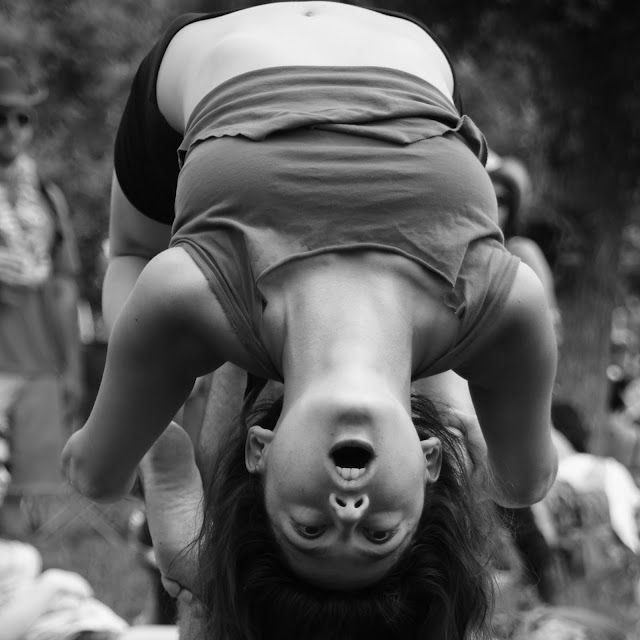 I try to go to Eeyore's Birthday Party at Pease Park in Austin, Texas every year. It reminds me of the Austin I loved when I came here in the 1970's to go to school. Janis Joplin sang in a local club and you could pretty much ride across town on a bicycle. The city has grown up a lot since then but the people who come to Eeyore's do a great job channeling that old spirit.

I usually grab a camera at random, stuff maybe $20 in the pocket of my jeans and head over to Clarksville to park as close as one can and then I walk an easy half mile to the park. I didn't stay too long. I didn't need to. I soaked up some good feelings, watched the drum circles and the unicycle football games. Saw the kids decorate the Maypole and watched everyone and their mother snap away with their smartphones. And that was fine by me.

Usually I wander around directionless but today was different. I was drawn toward a different end of the park where I came across this young woman and her partner doing aerobatic yoga and I just stopped. I love people who defy gravity. I love photographing beautiful people who are turning upside down. Who doesn't? So I photographed their improvisational routine with delight.

Then, rather than stay and look for more stuff, I decided to leave on this high note. And I am completely satisfied with my experience at the celebration. In the past I would have hung around hoping to find more, more, more. But I've learned that it's almost self defeating to keep going after a certain point. And that point is a moving target. 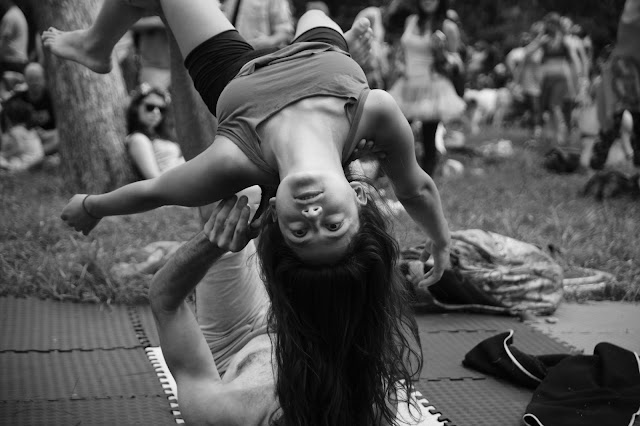 The camera I took today was my Sony a850. It's a throw back to the same look and feel of my old film SLRs from the dark ages. Big and heavy in the hand. A big, optical finder and a mirror that goes "boom, boom, boom!" when you hold down the shutter button. But I now get why I am partial to that camera. The longer I shot with it today the more it reminded me of those days of shooting Tri-X in a Nikon F3 or a Canon F1 (original). Big, brawny cameras that felt like they'd outlast your car or your house. That association, coupled with the fact that I shot so much black and white back then must have triggered some sort of mental muscle memory.

I set the camera to shoot black and white jpegs and I shot without looking at the indecisive consideration screen on the back of the camera. In this way I could shoot and move on. I removed the step where I reflexively stop after each flurry of activity to check the screen.....As though I'm so inexperienced that I fear I may have missed the shot or mis-set the important controls and screwed up everything. It was purging not have the instantaneous feedback loop engaged at all times. And it felt great to start looking for the form of a shot instead of the emotional triggers of color. 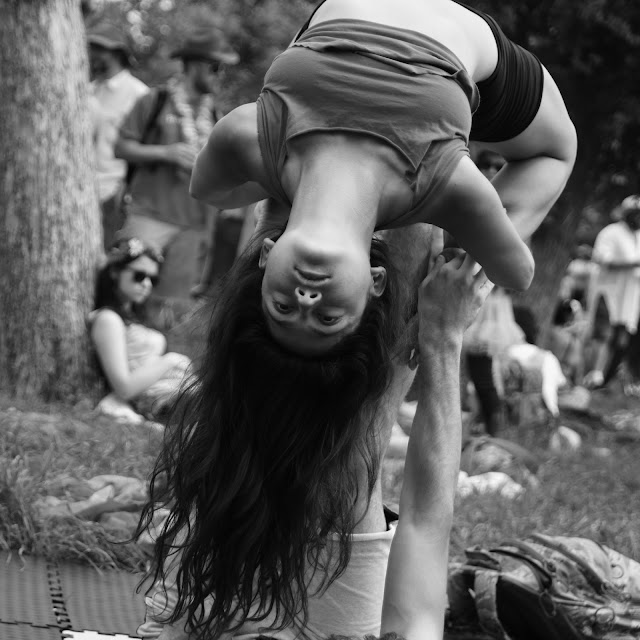 I used an old lens today. I selected it because I found it sitting on my desk this morning when I came back from an early Saturday morning public relations assignment for the regional gas company. Maybe Ben borrowed it and put it on my desk to return it to me. Maybe I put it there yesterday to get it out of the way of our video shoot. It doesn't matter. I grabbed it and put it on the Sony on my way out the door. It's a cheap, old Minolta 24-85mm 3.5-4.5 zoom lens. Very old tech. But a nice look, on sensor, when used as a black and white translator. 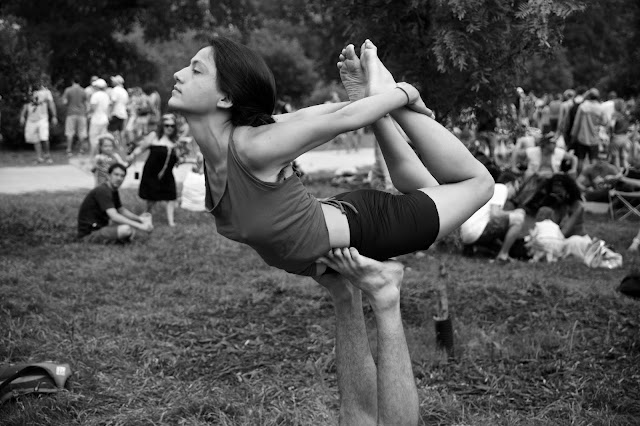 I had a long talk with my friend, John, this morning over our after-swim-practice, decaf coffees. We were talking about the need to keep adapting to and understanding the advances in technology as it relates to culture. Neither of us needs to understand dynamic power management of redundant web servers but we both feel like any knowledge that is diffused into the mainstream creates a cultural dialogue and that to be left out of this dialog is what separates and isolates generations. My friend doesn't need to use Twitter all the time (for example) but he needs to understand the twitter basics and how they mould the prevailing cultural structure. It's vital as we grow older to continue to embrace the translation of technology to culture to remain relevant and engaged. The alternative is a separation from our clients, our potential future clients, and a whole number of generations that will inevitably launch themselves into the world and inadvertently change our lives. 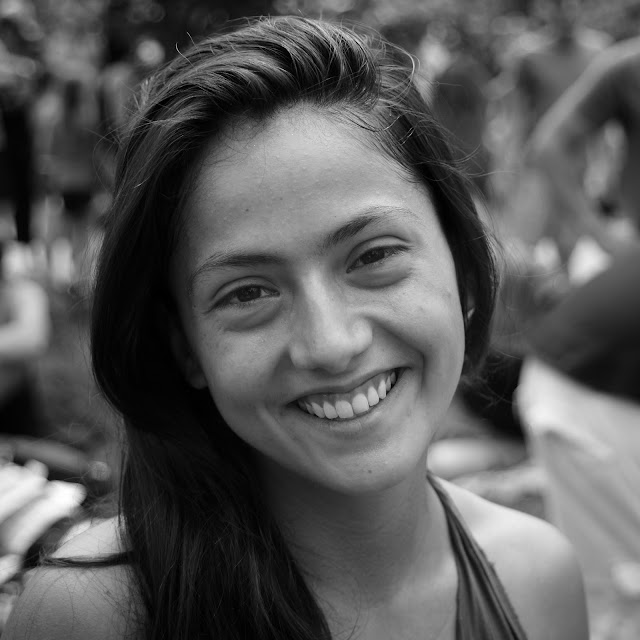 But continuing education doesn't mean everything changes completely. It's good for me to check in at things like Eeyore's Birthday Party or to make black and white prints that I really like so that we don't lose our personal relevance, which may be anchored at the other end of the progress paradigm. Know the future. Raid the past. Embrace the fusion.


Posted by Kirk Tuck, Photographer/Writer at 22:30

"..self-defeating to keep going" struck a chord with me. Seems that sometimes I'm guilty of soldiering on and on to find that one defining photo and that aways seems to take the fun out of the shoot. Nice reminder to "know when to quit", Kirk. Thanks.

What a stunning portrait. That smile could warm any one's soul. Keep your new approach going, I can read techy stuff elsewhere. I want to see what an artist can do, and you are one.

I have fond memories of Austin from grad school at UT in 71-72. Minor point--Janis died in 1970 and I think her Austin club dates ended in the mid-60s.

I'm having a "worlds are colliding" moment, I know that girl! She used to be my son's gymnastics teacher. I didn't recognize her upside down, and that seems ironic to me now...

Duke of the Arctic said...

Well worded piece. What a beautiful young lady. Unfortunately, my unattended drink was spiked and I did not get to enjoy the party. I ended up hanging onto the side of a truck and praying for the buzz to end. Lesson learned. Buy a new beer! Black and white tends to add class and character to a photo! Great pics!