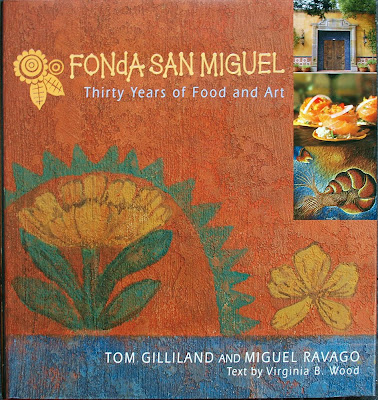 It's a little bit scary to work on a project that spans years, or even decades. Especially if you didn't know that everything you were shooting would one day end up as a packaged project. I've known and worked for the owners of the famous Fonda San Miguel Restaurant for many years and have done numerous photographic shoots for them. Tom Gilliland is an amazing collector of Latino and Caribbean artwork and he uses his fabulous restaurant as a gallery for parts of his collection. Part of the draw of the restaurant is the five star cuisine but the other draw is the ever changing show of museum quality modern art on the walls. And the walls themselves which were recently painted over the course of a year by a very famous muralist from Mexico City.

Where do I fit in? Well, ever since the inclusion of Fonda San Miguel in a cookbook I did back in the early 1980's for Texas Monthly Press, Tom has been hiring me to document the art in its environment. Wide room shots that show the juxtaposition of the art and the dining rooms, the furniture, the murals, and even the tile floors. I've shot the dining rooms from every direction and I am particularly fond of documenting the temporary displays like the ones they do each year for the "Day of the Dead" celebrations.

But here's the rub. Some shots were done in the 1990's on transparency film, some on an Olympus e-10 in our early days of digital. Some on an old e300. More on a Nikon D100, then a D200, then a D300 and so on. So, of course, I was expecting that with the ever improving cameras that the older work would suffer by comparison. Especially the early digital work with the low megapixel count Olympuses and the early Nikons.

But you know what? It all hangs together beautifully. Dozens and dozens of images. Double truck spreads with older digital cameras. Detail shots with the latest cameras and historical shots on film. The uniformity of style is pretty remarkable, given that it is for the most part unintentional. But the whole package works.

At least that was the concensus of the International Association of Culinary Professionals who made the book the 2006 winner of their Best Cookbook Design award and the cookbook winner of the 2006 Independent Publisher Book Awards.

All the recent food images were done by ace food photographer, Tracy Mauer, from San Antonio.

For my part I relied on a few techniques that seem to minimize quality differences and these are: 1. Shoot in good light. Even if you have to bring the light. I always shoot this kind of imagery on a tripod and at ISO 100. 2. Use really good glass and use the apertures that make every photographer look like a technical expert. Those are f5.6 and f8. If you are shooting with zoom lenses you really can't afford the quality hit at the wider or smaller f-stops. 3. Trust good designers. (That has nothing to do with technique but I loved the way they used the images we shot).

I hadn't intended to blog about this book but it brought to my attention the fact that, across the spectrum, the differences between generations of cameras really become apparent to most audiences only at the edges of performance where things start flying apart. If my style had been to shoot only available light I am certain that more modern cameras would have less noise in the dark areas than the older cameras. If I shot the images using only high ISO the results would be immediately discernible between cameras. But when we equalize the playing field with good technique the differences a become minor.

I have a few copies of this book on my shelf and I really love the images because they remind me of my own experiences over the last thirty years of dining in this fascinating and ever changing restaurant but I was reminded of the book when I walked through Costco today. There was a stack on the book table staring up at me.

Next time I write I think I'll share the story of my very first cookbook experience with Creative Mexican Cooking, by Anne Lindsay Greer........It was one of my very first book projects, done in the early 1980's, on a shoestring budget, and it always comes to mind when I hear people put off projects because they don't think they have the right gear. But that's next time.
Posted by Kirk Tuck, Photographer/Writer at 21:49

Thanks Kirk. I always enjoy reading about your hometown, even in an off-hand sort of way. I was in Austin this past June, and remember eating at a Mexican resturant, but I don't have any clue where it was. I've thought a lot about moving there, with family nearby.

Kirk,
I actually noticed something similar recently- I was doing a big portfolio overhaul, and while working it struck me how many different cameras were represented in my "best" work. My portfolio has stuff shot on 35mm film,120 film, with various models of DSLRs (minolta, pentax, canon, nikon) ranging from entry level 6mp to "pro" bodies. I even have 2 shots in there from a point-and shoot

Guess the whole "its not the camera" thing rings true, eh?

I can't wait to take a look at your photography in this book. I have a small obsession with photographing food and the environments in which it is grown, prepared and served. I swoon over vibrant colors and beautiful light. It looks like that is your sensibility as well. Your observations about the relatively level playing field of all the cameras you used for the photos is a breath of fresh air. I hardly read the Olympus forums anymore since they seem to less about the creative process and helpful tips on using these wonderful cameras, and more about the pixel peeping and who is buying what new body.

I love your stories about Olympus cameras as I shoot with an e-3, and still have my e-1 which was a gift from my father who saw how in love with my e-10 I was and before that the d-600...

Thank you for your vision and sane voice,

Continue to enjoy your commentary.

It is interesting to me that you mention the tripod and that it serves as a great equalizer in many ways.

In my initial dabbling in photography I focused on those that practice wedding photography. In my mind I saw these practioners shooting "wide open,"fast and loose.
Very heat of the moment. Strapped with a pair of 5Ds ready like six guns. I thought this was the way of photography.

Just recently I was captivated by the work of Sam Abell. It was patient and layered. I soaked it up and uttered the words "I want to shoot like that!" and fully believing that I could. Digging around I learned that he frequently used a tripod and embraced the more considered compositions it afforded as well as the slower film it allowed for...or as you have so wonderfully pointed out, creating beautiful images with digital-old and new.

Cool. I'm going to give it a try for more than the shooting the family portrait.

I second the motion. We prepare a photo calendar for our friends every year. Always combinations of transparency film, print film, point and shoot digital and Nikon D40.