I spent part of my week with a very interesting artist. Take a look at Marja Spearman's latest project: The Forget Me Knots. 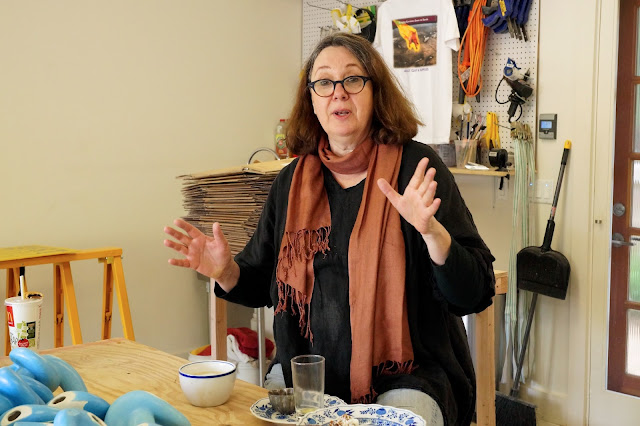 I got an e-mail a week and a half ago from Marja Spearman. She introduced herself as a sculptor looking for a photographer to document her project. We exchanged a few e-mails and I decided that I'd be delighted to meet with her and help document her project. The project involved making 1,000 ceramic Forget Me Knots, painting and glazing them different shades of blue and purple and then creating an installation that weaves across three properties in west Austin. Each ceramic piece is a wonderful and visually alluring metaphoric knot. The pieces seem to have different meaning for every viewer. One person who as driving by as the pieces were being installed stopped to look. She shared a quick story with us. She had a knot in her colon that had to be repaired surgically. She wanted to know if she could buy one of the knots. 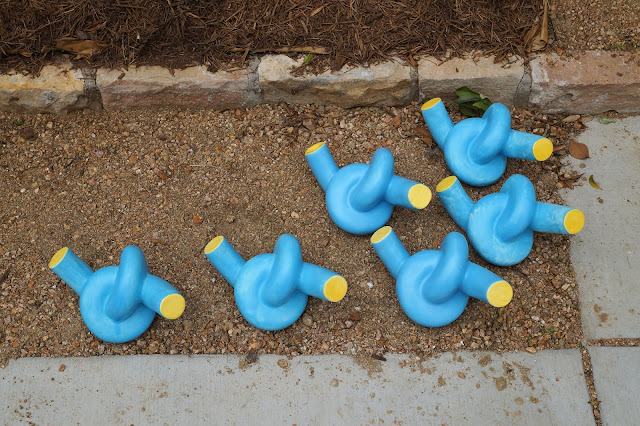 Marja insisted that she just take one. In talking about the project she shared with me that she still has a relative in Holland who carries a rope around with him just for tying "forget me not knots" to help him remember things that he has to do. That was part of the germination of this project which I think deal with memory and loss.

Documenting this project called for making photographs of the installation from a number of angles and at a variety of scale. From close up clusters that really show the form of the individual ceramic objects to wider shots that show the scope of the installation. Of course, effective documentation has nothing to do with camera capability beyond that the camera needs to have a relatively decent wide angle to short telephoto range and that the camera be able to handle the range of colors and textures. Most modern digital cameras would qualify. 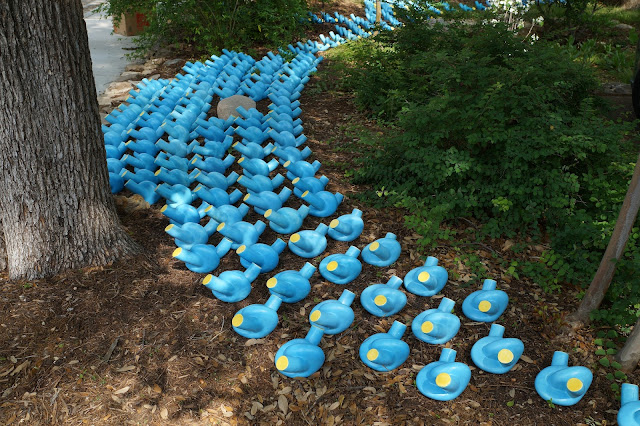 A second part of the project, which just seems like a natural adjunct, was to do a video documentation in much the same way. I documented the same range of scales but introduced movement and sweep to the coverage. Video also allowed us to interview Marja and her assistant, Christina. Our edit will be very straightforward: A few title slides to open, a few interviews and then intercuts of the installation with a continuation of the sound track from the interviews over the top of the images of the knots. 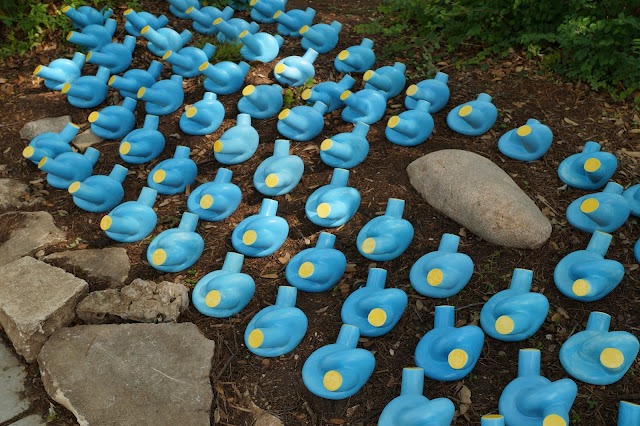 To make the video interviews I worked with a Sony a99 camera (but any of the equivalent Canon, Nikons, Panasonic or Olympus cameras with video would do equally well. For me there were two big considerations. One was that the camera be able to accept external microphones while giving me real time controls over audio levels and, second, that the camera have a headphone jack so I could monitor the quality of sound we were getting.

For the interview I worked on a tripod and used a manual focus 85mm lens. I used a set of Sennheiser wireless microphones. I would pin the microphone onto the person I was interviewing (or fallowing around during the installation) and they would be free to move around while they spoke. We got some good material by keeping the microphone attached to either Marja or Christina while they were engaged in installation. Their remarks about why they were placing the objects in such a way illuminated my understanding of their vision. 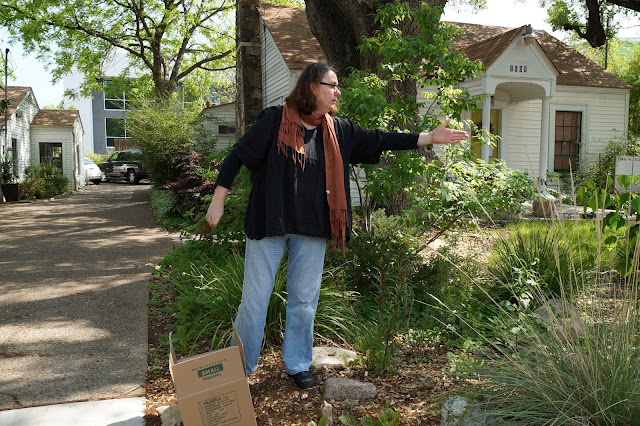 While the process of documentation was very straightforward I think there is so much that could be done in the video edit that I'm feeling a bit intimidated about it. I'm torn between how much could be done and how much I'll be able to do under my time and budget constraints. We'll make something good for now and pass along the raw video to Marja in case she wants to push the program further or cut it in a different way. 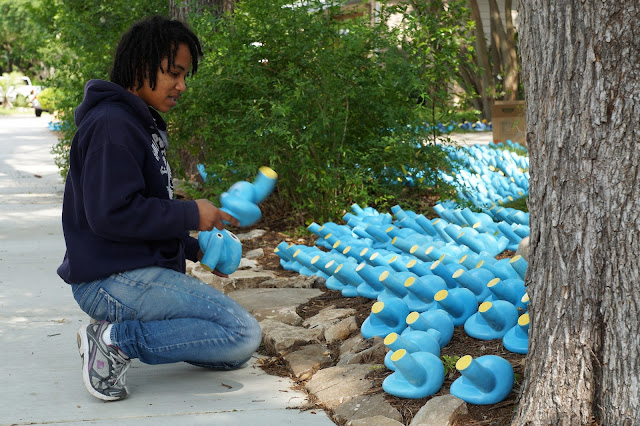 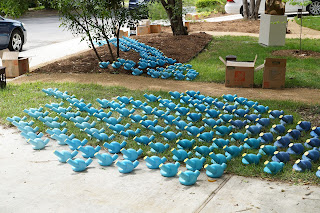 Working with other artists engenders a good feeling of sharing and opening one's eyes to a different angle and a different perspective. I love that this artist, Marja Spearman, had a singular vision and combined her art, her management skills and her ability to build a collaboration into a overarching project of making art. There is no discernible business return. The knots required months of hand production, and because of the variations in color and glaze there was a high failure rate. Her team experimented over and over again with different glaze formulations and different firing parameters. In the end she understands that some of the objects will be stolen, other broken and many given away. That's what makes documenting the project so important.
The installation itself is temporary and will only exists in the collection of images and video that we capture during its short tenure. 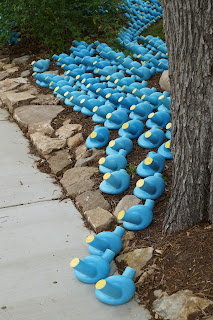 This is a busy time in Austin. This weekend and next are the West Austin Art Studio Open Houses. You can drop by and see the installation, and speak with the artist. A direct connection with an accomplished artist. You can also make your own documentation of her work. Just go this afternoon or the afternoons of next weekend to the intersection of Lamar Blvd. and 31st St. The installation starts just a few feet from Lamar on the west side.  You can turn into 31st St. and you'll probably find a bit of parking along the street. Next Saturday Marja says there will be a bit of catering for people who drop by. Go see a fun installation. If you aren't in Austin, don't worry...I'll post the video as soon as I finished editing. Hope you are having a fulfilling and artistic Sunday. Best, Kirk

Posted by Kirk Tuck, Photographer/Writer at 22:32

What a cool project that is! I don't recall seeing an art project so prominently displayed around peoples' properties like this one. The closest I've seen to something like this are extravagent Christmas-light displays done on people's properties to raise money for charitable causes. Thank you so much for sharing your experiences with a project from yet another artistic medium. I enjoy seeing pictures you take of projects like this as much as your photos of Zach Scott productions.

Bring them out to Sydney for sculptures by the sea!! It's a fantastic venue for the likes o those forget-me-nots.

I can imagine that everyone who drove by stopped to look and think about what they were seeing! Incredible.