Getting Kinky in Austin, Texas 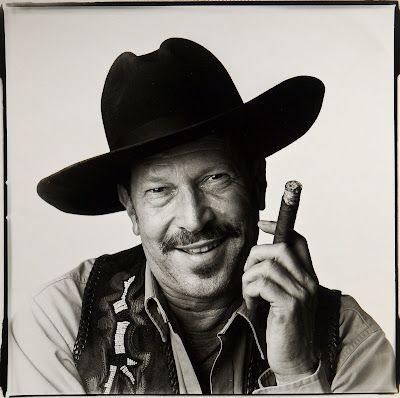 There's nothing I like better than an interesting portrait subject and a big, soft light. This was shot for a magazine cover and it's one of the outtake outtakes. That means the magazine assigned me to do a 35mm color image to run on the cover (vertical, saturated, etc.) and when we finished with that we switched cameras and mentalities and started shooting big black and white images that were square and fun. The color outtakes are the first outtakes and the stacks of contact sheets and negatives are the second outtakes.

I've tried portrait shoots a lot of different ways. Many photographers I've worked with or hired (back in my ad agency days) were strong believers in the "big crew". They made each portrait session a big deal. A really big deal. There was always a first and second assistant, a make up person and maybe another person for hair or wardrobe. Everything always seemed tense. Like a preparing for surgery. And sometimes the big crew is client driven. The portrait may be of a CEO or some other "very important" company officer and short timelines may have been set.

There's always a good rationale. And for some people it may be the only way to comfortably work. But I've always been most comfortable hewing to the opposite extreme. If I brought along assistants it was usually because I couldn't carry in all the gear by myself. If I hired a make up person I generally wanted him/her to do the make up and then leave me alone with the sitter.

I think it's hard for a lot of people to have their portrait taken. They have a certain amount of fear that they won't meet expectations or that they won't be able to project what they want people to see. With more and more people on the set it can become harder and harder for inexperienced sitters to relax and get with the program. Even if the inexperienced sitters are world famous business people....

Here's the way I like to do it. I like to spend hours by myself setting up and testing my lighting. Which is kind of silly since I tend to light things the same way most of the time. I guess it's a ritual. Before every major portrait sitting the first thing I do is to clean the studio. Then I start planning the shot. Seems like the biggest thing is getting the background just right. If I can get the background hung and lit just right everything else falls into place. I usually have vision for how I would like the photos to turn out. Sometimes it goes that way and sometimes it doesn't.

I'm always trying to get the most distance between my background and the subject. I like to use long lenses and compress the background as much as possible. f2 on a 4:3 camera, f2.8 on 35mm and f4 or 5.6 on a medium format camera. The last thing that gets set is the main light. Right now I'm setting up for portrait tomorrow at 1 pm. I'm using a Profoto 600 monolight into a five foot octabank and I'm diffusing that thru two layers of diffusion on a six by six foot panel. Maybe a little piece of foamcore to the opposite side for fill.

For this session I'm working solo. Just me and the sitter. We'll talk about what we want to get from the session and then I'll have him sit down and we'll start. The session goes in fits and starts. We might find a subject of mutual interest and chat for several minutes between bursts of frames. ("He burst into Frames!!!")

When we both feel that we've got what we came together for we'll end the session, talk a bit more and go our separate ways. No big drama, no big production.

I'll head out to lunch and then come back and start processing. And we'll do it all over again the next day. And that's the fun stuff.

Posted by Kirk Tuck, Photographer/Writer at 21:50

Sweet write up of your working style. I tend to agree (sometime I wish you would write something I didn't agree with). My present Tokyo studio is so small I find myself with a similar set up but I have to use much wider lenses at as small openings as possible to work with the space I have.

Funny though, I always imagine that if I had a photo shoot in the real world (outside of the concrete jungle that is Tokyo), like in Austin, that I would shoot as much outdoor portraits as possible. Scheduling problems would arise, I assume.

Thanks for publishing this. Great writing, as usual.

'Best' camera I ever owned was the Mamiya C330 Pro-F, which I'd purchased in 1973, used, from an engineer that worked with my dad at Delta Airlines (Hartsfield in Atlanta). It was focus by screen only, and came with the 80mm and 135mm lenses. I could use that camera waist-level or overhead. It was a great portrait camera as well as a pretty good PJ machine. When used for publishing, the 2 1/4 negatives were large enough that in many cases I could make a contact sheet and use that in the articles. I would shoot Tri-X at ASA-400 almost exclusively, developing in either D-76 or HC-110, depending on the available light and the subject. I sold it to get out of debt in 1978. I've always regretted loosing that particular camera. For whatever reason, this photo of yours brings back a lot of fond memories.

I've seen a lot of photos of Kinky Freidman over the years but this one connects right between the eyes. With connection like this nothing else really matters. Hell, when you can pull a look like this outta someone you could probably shoot for Vanity Fair with a Holga. Nicely executed but brilliantly played!

I have an upcoming session with someone and I've been thinking about the same thing: how I enjoy just being alone with the sitter. Maybe it's because I rarely shoot portraits but there's something nice and intimate about being the only two people in the room. When I've shot stuff with other people around everything feels rushed and disconnected. Here's to shooting alone!

Connection. there's something magic, and it's in the connection...

One comment which resonated with me, which I would really love to know more about is "make up".

I really don't know how to use photoshop, and I always feel like cheating (badly) with clone/stamp/healing brushes.

Awesome photo as usuall. I am alwasy suprised how you manage to connect to your subjects so well.

Kirk as always you are spot on with your article, in the end what´s important in a photo is the "soul" it has in it, if there´s no "soul" then the photo doesn´t work specially when dealing with people photography, it is all about the connection :).

The photo is beautiful Kirk :)

Thanks to all who posted. It's so great to get feedback so quickly. When you write a book it takes forever. I'm getting ready to do my first big event assignment in a while and I'm making sure all my stuff still works. Thanks for the good feelings.