Who's a nerd? I am! I am! Who's got the first PowerPC chip photo? 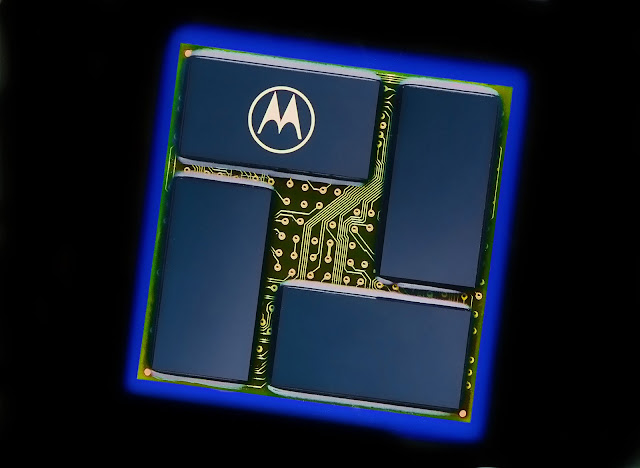 Back before the bulk of the Twitter-Babies who now cruise the hallowed halls of social media were even toilet trained and before they entered the workforce with a swagger that said, "We basically invented high tech," we still had computers and we still had something that resembled the internet.  And we used it to do stuff.  Microprocessors got invented.  And improved.  Usenets spread info, sans virus or Viagra advertising.  And back then some American companies even came together for a while to improve the construction and design methodologies of chip making (not Taco Cabana).  If I remember correctly the first PowerPC processor was code-named Somerset and came from a partnership between Motorola, IBM and Apple.  That was back in the Camelot years of U.S. dominance in almost all things tech-y.

The whole design process was based around reduced instruction set computing (RISC) and it worked out pretty well for a while.  Well enough for me at least because I got to photograph a lot of the product they put out.  This was well before digital.

The above device was glued down to a white plexiglas plane, rear lit with blue gels and then the areas we wanted to go black where masked off.  I used some fiber optics piping to guide white light onto the chip surface from a halogen source.  The shot was done in two exposures,  one for the chip and the front light, the other for the background blue glow.

The device was rather small and we wanted a big transparency so I used an Apo-Symmar 210mm lens on the front of a Sinar 4x5 view camera.  The camera was specially rigged with a Hassleblad 2001 FC body, prism finder and A12 back.  This allowed me to take advantage of big bellows extensions for magnification,  image placement and management using the camera movements, all the while being able to view the image directly in the finder.  Every component was locked in place and we used the Shutter in the camera to control overall exposure.

We bracketed through one roll of 120 professional color transparency film, left everything set up until the film came back from the lab and then sent the selected frame out for a drum scan.  The image was used everywhere the big three went.  Including a 12 by 12 foot version for stage shows.

Might be a bit easier to shoot now but it really didn't seem like a big technical deal back them.  Just had to make sure all the planes were planar and all movement was cancelled.  Don't want any jiggle between your two exposures.

I found the above image in a drawer on a 5x7 inch piece of color print paper.  They used to send them out by the hundreds during the first product launch.  Nice to remember how we did stuff old school.  I'm still pretty proficient with products.  I don't like shooting them as much as shooting gorgeous models but, really, who would?

I'd link to a lot of the product I talk about above but.......but "that train has sailed." (quote: Austin Powers).

On a random note:  I was so proud of the new Hasselblad system I bought and was using on an assignment at Motorola.  One day I was monologuing about how cool and costly it was.  He obviously was tired of my BS and wanted to get back to work.  He said, "That's a really cool $5,000 camera.  Now will you stop leaning against my million dollar electron scanning microscope?"  Puts the toys in some sort of perspective.

Posted by Kirk, Photographer/Writer at 15:24

Kirk, I really love your posts about all the things you do right a lot more than the ones about what everybody else does wrong. Thank you for sharing this and taking us down memory lane :-)

That's a beautiful image. Detailed yet ethereal. Really has that "before the dot.com bust" look to it. What would you visualize as a look for a similar assignment today? You know, to make it look "20-teen-ish"?

Thanks for sharing. I too remember those days, more from the computer side than the photography one.

:D, my scopes have always cost more than my camera gear. Of course the university owns the scopes. These are neat though http://www.hitachi-hta.com/products/electron-microscopes-and-focused-ion-beam/tabletop-microscopes/tm-1000-tabletop-microscope you can actually make the choice now between a medium format back and a SEM. Neat chip though.

Those batwings bring back memories...Back in the 70's I worked for Motorola making printed circuit boards at least the size of a sheet of paper, sometimes larger. I shot these things on a huge copy camera and then transferred the images for screenprinting. Being a geek, I was really into the process but my co-workers preferences ran to sex and cheap beer.

Tuck was a well known fixture in the technology boom here in Austin. He's made a graceful transition into new kinds of business time and time again. I'm always a bit amazed.

Ahh the PowerPC 601. Brings back memories. Amazing how times have changed.

FWIW, I work at IBM, and work on the PowerPC GCC compiler for the latest incarnation of the powerpc chip from IBM (power7). The powerpc architecture has grown somewhat since the 601 days.

Kirk, I don't know if this is supposed to be some dark secret but weren't you an electrical engineering undergrad at UT Austin? You were actually in some of my classes.

keep up the good work. it is worth it