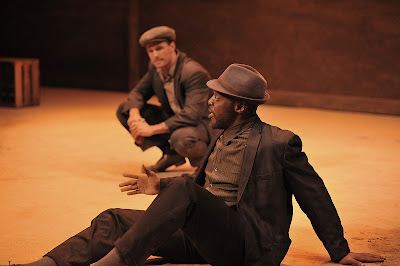 One thing you have to say about the D700 is that it works very well in light so low you can't read the dials on the camera body.
I like shooting dress rehearsals for Zachary Scott Theater.  If a play is not exactly my taste (a rare occurrence at Zach...) I at least have the technical challenge of rendering it with good technique.
When a play is  good I feel the challenge with more weight.  When a play is really good I want to share all the things that made it special to me. 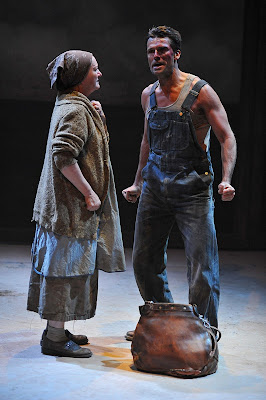 I recently shot the advertising images for the "Grapes of Wrath" during the dress rehearsal.  I was just amazed at the use of light in this production.  You can see in the photographs that the lighting designer used a limited palette of warm tones for most of the scenes.  I don't know if you can tell from the images but it evokes the hot dusty feeling that must have pervaded the "dust bowl" in the middle of America in the 1930's.  The light was so well done it transported me into the scene and the milieu.  In many theaters lighting directors, because of their limited inventory of lights, make use of a few hard spots and a handful of gels.  This set was literally as intricately lit as a blockbuster movie set.
I shot most of the action with a Nikon D700 and a handful of prime lenses.  My primary optic was Nikon's inexpensive 85mm f/1.8.  A wonderful lens that's often overlooked in the mad rush to have the fastest glass.
Checking the IPTC data shows that I set the camera at ISO 3200 and used the lens at f/3.2 with a shutter speed of around 1/25oth of a second.
I also shot with a Fuji S5 but none of 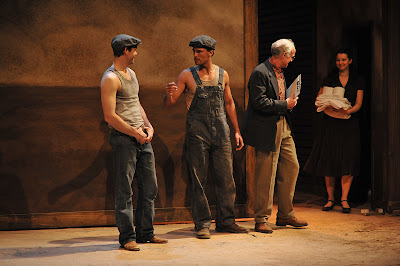 those images made the cut for one reason or another.  I have one complaint about the D700.  I don't think it focuses as well as the D300. It may be the spacing of the sensors or my own ineptitude but I hunts every now and then when I least expect it.
Someone will ask about my workflow in these situations and I want to talk about that because I'm of two minds when it comes to shooting theater.  If we had a big budget for post production I would probably want to 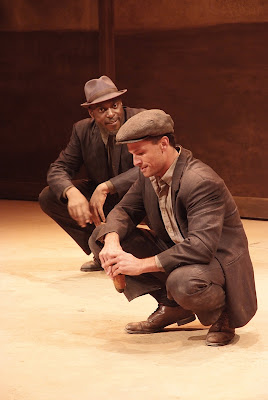 shoot every frame as a 14 bit uncompressed raw file. But the budget is all but non-existent.  Then there is the advantage that, with the D700, the camera corrects for the weaknesses of any attached lens by tweaking out any chromatic fringing, but it's only automatic in the Jpeg setting.  This feature makes the 85mm f/1.8 lens sharper and better than it used to be.
I usually set the WB at 3000-3200 as all the lights in the theater start life as tungstens, though most of them are gelled.
The other reality is a time constraint.  The marketing director needs the images as quickly as we can produce them.  The goal is always to shoot on Weds. and get the images to our daily paper on Thurs. afternoon.  In a typical rehearsal shoot I'll take 1200 to 1500 images.  If we processed raw files individually it would take an enormous amount of time.  That's why it's important to me to get things right in the camera.  While I'm shooting.  All the files I've placed here are untouched jpegs shot at the highest quality settings.
While I may screw up ten or fifteen percent of the shots I generally end up with at least a thousand usable images for the the marketing team. 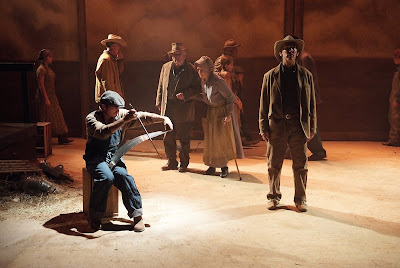 As tough as it is to capture the action under low light, with constantly moving actors, my client is very happy with my work. The digital cameras do make things easier but in writing this I'm thinking through the process and reminding myself that the "feel" for the flow of a show and being able to anticipate action is more important than the camera gear.
In fact,  in days past we've shot the shows with Leica M cameras and color transparency film and consistently had images published in the national theater magazines.  Our favorite way to roll back then was to use Kodak 320T slide film, pushed one stop in the processing to ISO 640 and shot as though it was ISO 500.  Spot meter around the neck along with two rangefinder bodies.  One sported a 35mm Summicron and the other a 75 mm 1.4 Summilux.
You had to be able to feel your camera in the dark and know what your settings were.  And you had to know when there were  subtle light changes so you could meter again and hope the settings stayed the same for a few minutes.
In some regards shooting theater remains the same.  The spot meter is king and we keep the camera in full manual exposure mode.  There are just too many dark spots on stage to depend on automatic settings.  And when the light is all but gone manual focusing becomes mandatory.  I'll say one thing,  shooting live theater certainly keeps your photo reflexes in shape.
By the way, double clicking on the images will show them at 1200 pixels. Thanks for reading.
P.S.  Fashion note:  If you shoot live events you might think to wear as much black as possible so that you blend into the darkness and not distract the actors or speakers.  I even wear a black baseball cap now that I'm dying my hair a bright silver.....  :-)
See more work:   Kirk Tuck's Commercial Website/An adventure in iWeb
Posted by Kirk Tuck, Photographer/Writer at 21:06 10 comments: