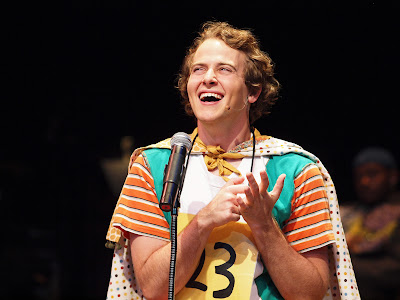 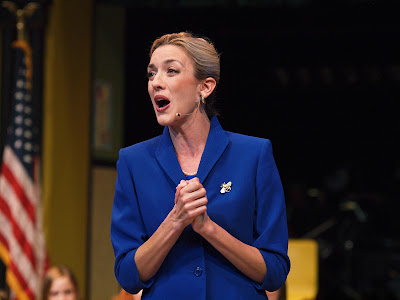 (click on the pix to seem em larger).
Shooting theater productions is fun. Or it should be. Actors are acting, someone else has done all the lighting for you and there's lots of contrast with pools of bright, intense light and equal areas of stygian darkness.
I've written before that taking good photographs of a live production helps hone your reflexes and pushes you to anticipate action. My problem yesterday was that I paid too much attention to the play. And it was hilarious, which made me laugh, which made the little steam engines, or whatever makes Image Stabilization work go into over time.
The play is hilarious. But between bouts of paralyzing laughter I felt duty bound to get some sharp, well exposed images that the theater could use in the newspaper to sell tickets.
First thing I did was figure out a good white balance which is harder than it sounds because some lights are standard whites while others were gelled blue and others yellow. In fact the white balance changed by quadrants on the stage. I tried to figure it out and settled on a custom compromise. 3600K.
Seems to have worked out pretty well. In the old, old days I might have brought a color temperature meter but I'm equally sure it would have been useless since I would never have had the right filter packs with me to effect the proper change, and, if I did the resulting filter pack would have sapped precious photons from film I was already planning to push process.
I brought two cameras with me because I'm always certain that the one time I come with a solo imaging machine will be the one time Murphy's law cripples it and leaves me with no options. Last night it was pair of Olympus cameras, the e30 ( a darling camera with lots to recommend it) and the e520 (which doesn't focus as accurately as I would like with an f2 lens in the dark but is cheap as dirt and works well outside......). I used the e30 with my new "favorite/how did I ever live without/OMG/gush lens, the 35-100mm f2. Sounds kind of stubby but when you remember that we Olympus shooters got shortchanged on chip size (just kidding oh brethren...) the whole thing kinda factors out into a 70-200 f2, which is something special.
If you don't shoot Olympus you've probably got a genuine 70-200mm in your bag so you know how much fun that grab bag of focal lengths can be when you are standing stage size and trying to get "two shots", "three shots", and a few random close up solo portraits. And I know that your D700, D3, 5D is less noisy than my e30 but I also know I'm shooting a stop wider than you.....
I figured I'd be pretty noise free if I stayed around ISO 800 so I tuned up the camera and got to work. The lighting was such that I spent most of the evening shooting at f2.5 in between 1/250th and 1/500th of a second. Combine that with the nifty four stop IS in the body and you've got a pretty interesting handful. For the few times I needed to go wider I grabbed on old, battered 14mm-54mm and made due at f3.5. Not glamorous but workable.
There's not much I'd change about the e30 body. The finder is nice, the displays are good and the controls are positive. The one thing I would change about the e520? I'd make it into another e30. We'll see about that over the weekend....
The theatrical gods of photography graced me last night by allowing me to shove all my images on one 4 gigabyte card. That sure makes burning a DVD for the marketing director an easier task. I slogged home around 11 pm still chuckling about the one "home schooled" character in the play who "makes his own clothes and even makes capes for his cats".
I've been shooting for Zach Scott Theater for 17 years now and I would say that I've benefitted more from the relationship than the theater has. They keep me constantly working on technique, introduce me to theater that is challenging and new (and which I wouldn't have the insight to find on my own...) they introduce me to incredible talent (who are easily recruited as models) and they throw fabulous parties.
In addition to all that they send out several hundred thousand printed pieces a year to the upscale demographic in our town. With my credit line prominently displayed. It's really nice marketing. If you haven't thought about shooting a little theater stuff in your town you might consider. Could be good all around.
Two thumbs up for the 35-100 and the e30.
Posted by Kirk Tuck, Photographer/Writer at 18:41 12 comments: