When I think "toe freezing" cold I think of ballet in St. Petersburg 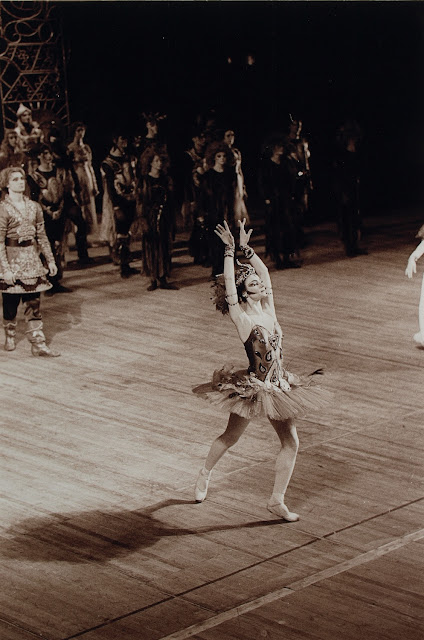 The Kirov Ballet at the Mariensky Theater. February 1995.

It's breathtakingly cold in Austin, Texas today but nothing like mid winter up in St. Petersburg,  Russia.  They know how to do a real winter.  It's odd the places that photography will take you.  Back in 1995 I found myself spending ten days in Russia with a group of architects, philanthropists and Russian art lovers.  We were working on an ambitious project.  Here's the background:

Everyone seems to know about the Catherine Palace in the city of Pushkin, just twenty miles from St. Petersburg.  But nobody seems to remember the Alexander Palace which sits just four hundred yards away.  It was the very last palace of the Czars.  The site where the royal family was alledgedly executed in the bloody revolution that marked the start of the Soviet Union.  The palace was a mix of deco, Byzantine and several other styles of architecture.  The problem we were there to solve was that the Palace had been used as the headquarters of Soviet Naval Intelligence for seven decades, it was falling apart and the Soviets didn't have a spare ruble to throw at a renovation.  That's when the World Monuments Fund stepped up to the plate and offered to help.  Funds were raised and a team was put together to do a site survey and estimate what would need to be done to restore this interesting monument to the past.

A friend asked me to join the team and it was an adventure I didn't want to pass up.  I headed to Whole Earth Provision Company to buy some winter clothes and then did my research to prepare for the trip.  Shooting in winter meant short days and low light.  I would need to do interior and exterior architectural shots, document art treasures and paintings and still be able to shoot the random human.  Since we had certain budget restraints I chose to shoot on medium format color negative and color slide film instead of 4x5 sheet film.  I packed three Hasselblad cameras.  Two 500 CM's and one SWC Superwide.  A camera with a fixed 38mm Zeiss Biogon lens on the front.  Other lenses included:  50mm, 60mm, 80mm, 100mm,  135 Macro Planar,  150mm and a 180mm.  I brought along six film backs and two Polaroid backs.  I also packed a stout Gitzo Carbon Fiber Tripod.

Since we'd be flying and going in and out of the cold I chose not to take studio strobes, instead opting for a box full of Lowell DP, Omni and Tota lights.  I changed out all the 120 V bulbs for 240V bulbs and bought plug adapters that would convert my American two blade plugs into Russian standard plugs.  I also packed a few extension cords and five or six light stands, a smattering of umbrellas and reflectors and plenty of spare lamps.  With the right filters I could mix the lights with the weak daylight.  But in most locations I was able to use the tungsten lights with no filters as the outside light was so weak.

I flew in with three cases of equipment and an associate who helped me handle all the stuff.  Now that we do digital I find that quantity of gear a bit humorous but it does serve to remind me that this used to be a professional that used to require a creative point of view and a knowledge of the right tools for the right job.  In retrospect my choices were good ones.  I also took a Contax ST SLR camera and two lenses, the 35mm 1.4 and the 85mm 1.4 for my personal use.

Most days were well below zero when we started out.  When I finally got permission to photograph the exterior of the Alexander Palace I stood with my camera and tripod hip deep in snow as I waited for them to move the T-72 battle tanks from the front of the building.  When we went out at night we dressed in layers and layers.  Nothing new if you live up north but very strange for central Texans.

I met an incredible number of nice people on the trip and saw some incredible art in the Hermitage Museum but I think the high point of the trip was an evening at the ballet.  Since we were guests of the Naval Intelligence Service, and since their stomping ground was St. Petersburg, we were treated to the best of everything.  Including seats for the ballet.  Our bodyguards and the military attache who served as our host led us down a long hall before the start of the Firebird and opened the doors to the Czar's box seat.  The balcony extended right up to the edge of the stage as you may be able to tell from the photo above.   During the intermission we were led back up the hall to the private dining room for the Czar where there were tables set with wonderful food and an assortment of wines and Champagnes.

When we returned to the ballet I wanted to take a photo or two and my body guard signaled me to follow him to an area just to the other side of the box, obscured by curtains from both the audience and the box seat.  It was the perfect spot from which to shoot.  My body guard was an avid amateur photographer and I tipped him liberally at the end of my stay with all my unused film.

When we left the theater that night we had to wait for our cars to arrive and we stood outside and watched the fattest snowflakes I've ever seen drop down in such quantity that visibility was maybe twenty feet.  I learned that the temperature dropped to around minus 25 degrees farenheit that evening. In my thick, black, dress leather shoes I could feel my toes slowly freezing and they only warmed up after twenty or so minutes in a hot shower.

There are so many stories I remember from that particular trip.  I'll look through the film files and digitize a few of my favorites and then post them in a few more segments.  But for some strange reason whenever it gets really cold I have an instant vision of the cold, crisp night at the theater in St. Petersburg.  The project was successful.