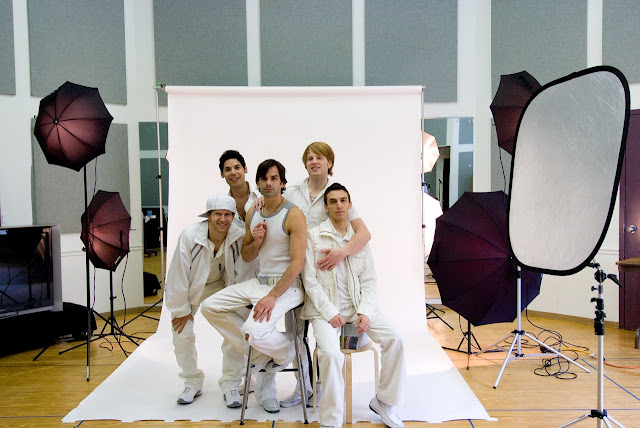 I've written before about shooting stuff for Zachary Scott Theater, here in Austin, Texas.  I've been doing it for 17 years and I'm still having fun.  We shoot three major categories of photographs.  The first is set up shots to be used in marketing pieces to promote current and upcoming productions.  The second category are the "running shoots".  These are reportage style shoots that take place during the final dress rehearsal.  The third category are the shoots I do for the season brochures.  These are marathon sessions where we shoot to a concept that will be used throughout the year as both the theater's branding image and thematic leitmotif.  The images here are from the first category.  General promotion for a show.

Shown in these images is the cast of "Altar Boys", a really fun musical comedy.  But I'm presenting them here in rough form to show how I light white background images. 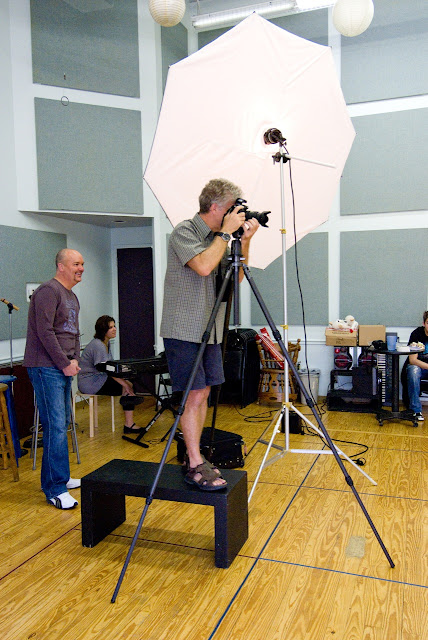 Yep.  That's me up on that bench pointing a Nikon D700 with an old 24-85mm zoom lens at the actors.  That's my ancient Gitzo carbon fiber tripod and you can see why I love it.  Even without the center column extended it reaches up seven feet tall.  I like shooting down.  It's a fun angle.  The shorts and sandals are mandatory summer wear here in Austin. 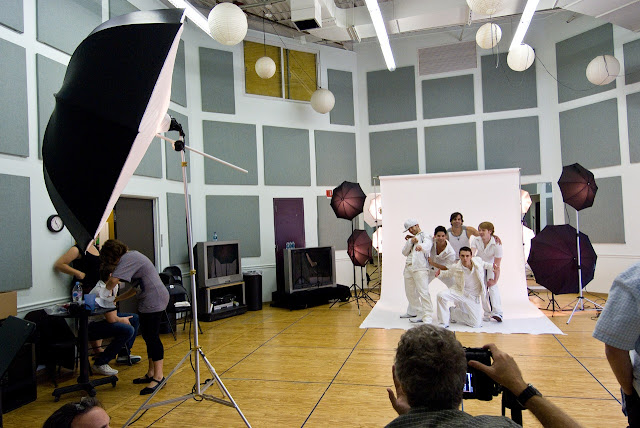 The front light is very simple.  It's a huge 84 inch Lastolight umbrella with its own, built in white diffusion panel.  It's beautifully soft.  Even when used twelve to fifteen feet from the subject.  Why the heck would I use it so far away?  Well, if you remember the inverse square law, the further away the light source the less fall off there is from side to side in the image.  And you can see how evenly the actors are lit.  The only other frontal modifier is a silver 48 inch reflector panel to the opposite side. 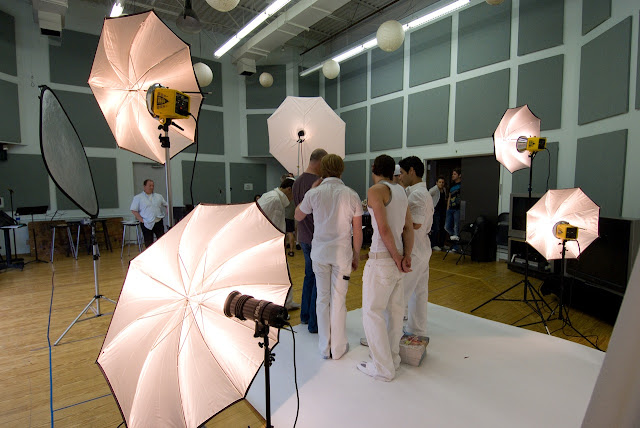 The nuts and bolts of getting a good, white background are simple:  You want very even lighting across the entire background.  That's why I'm using four umbrellas.  You want to make sure the light from the umbrellas doesn't spill forward and strike the subjects directly.  That's why we carefully focus the light sources into black backed umbrellas.  Finally, you want to forget all the nitwits who say you don't need a meter if you have a digital camera and you want to pull out your incident light meter and make sure that the white background (according to your incident light meter) is one third to one half of one stop brighter than the light on your subject.  Anything brighter and you risk the light bouncing off the background, wrapping around the edges of the subjects and degrading the whole image.  Once your histogram hits 255 how do you measure 1/3rd of a stop more?  You can do it easily and quickly with an incident light meter! 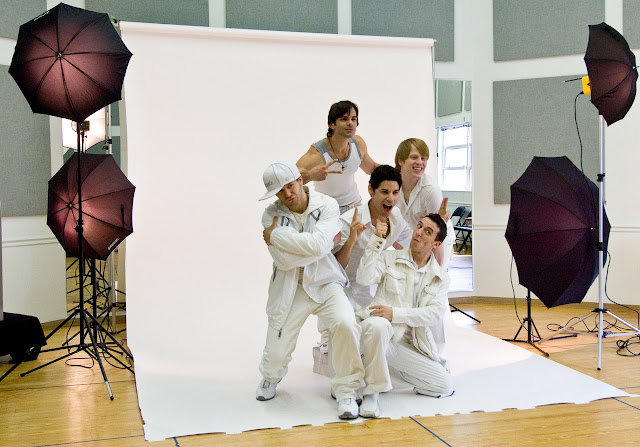 That's pretty much the long and short of it.  Each of the background lights was a self contained, 300 ws monolight while the main light was powered by a Profoto 1200 ws Acute and one head.  We shot maybe 250 shots with different groupings, expressions and gestures.  The finals were used in brochures, newspaper ads, post cards and on the web.  When we finished with the project my assistant, my friend Will and I went to Chuy's for some Tex Mex food.

A more in depth explanation of this set up is in my book: Minimalist Lighting: Professional Techniques for Studio Photography

If you want to dive into how I shoot portraits we're doing a day long workshop in Austin, Texas on February 13th.  Hit this for the sign up page.....
Posted by Kirk Tuck, Photographer/Writer at 20:29 3 comments: