I'm a sucker for eyes. Go figure. And an honesty is the best policy disclosure. 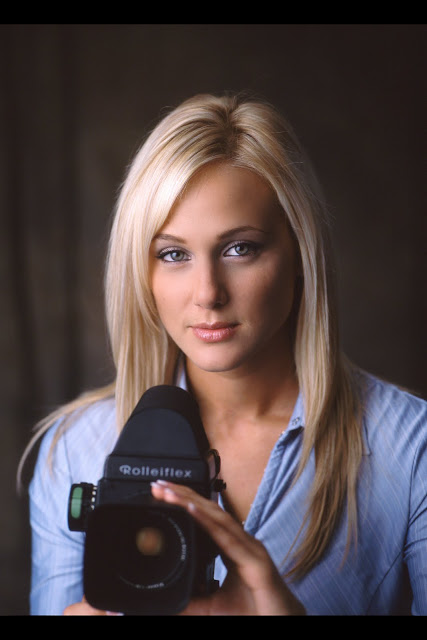 The late, great David Ogilvy was widely considered the ultimate godfather of modern advertising.  His agency was also among the first to scientifically test advertising.  According to Ogilvy, if you want to stop a reader of magazines dead in their tracks with an ad the sure fire method is to use an image of a person looking straight out at the reader.  It's human nature not to look away.  And it moves more readers to read headlines in print ads that any other technique.  That's why I love portraits.  And that's why my portrait subjects generally look directly into my camera.  In fact, I find it disturbing when the subjects of portraits look off to one side or the other.  I like an occasional profile but that's a rare pleasure like eating ribs.
I shot the image of Sarah above as a possible cover shot for my third book for Amherst Media.  There was another set that I liked even better that had Sarah on the pedestrian bridge spanning Lady Bird Lake here in Austin, Texas.  Let me see if I can find that.......Oh.  Here it is: 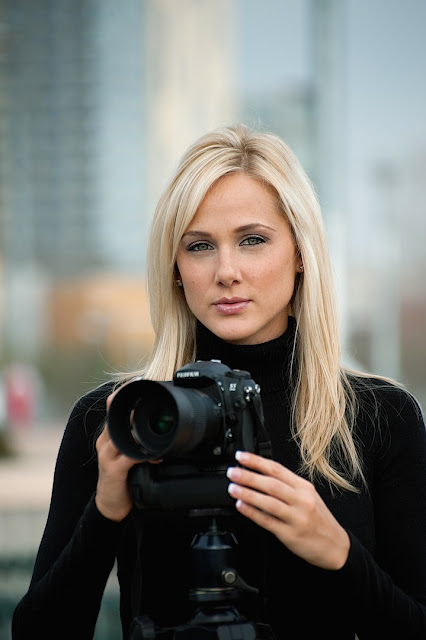 I shot this with a nice, soft diffuser right behind me blocking the direct, weak sun.  It was a 3/4 stop diffusion scrim from Westcott.  I never really heard why but the Publisher, Amherst Media, thought that the collage of images below was more suited to the subject matter.  And to a degree it is a more honest representation of what's in the book.  After all, the book has nothing to do with photographing beautiful women on bridges in central Texas.  It's a guidebook to actually make money doing things like taking photographs of beautiful women on bridges in central Texas.  I like the shot above pretty well but the people at Amherst know what they're doing and the book is selling well.  It's funny though.  Everyone I meet wants to become a professional photographer yet few of them have any interest at all in what I have to say about living through 25 years in the industry and making a good living year over year.  When I talk about marketing and advertising or billing (all things covered in this book) their eyes glaze over and they head over to the counter at our favorite coffee shop to order another strong drink.
But when the conversation turns to gear everyone is all ears.  They want to know what kind of flash triggers I use and are routinely disappointed when I tell them that, most of the time, in the studio, I end up using a sync cord.  They want to know which camera art directors like best but they become disenchanted when I tell them that art directors are much more interested in the presentation of your portfolio images than by the gear you shoot with.  And when it comes to lights.....well you'd think Profoto was one of the original disciples.
What is it about the whole subject of business that turns so many photographers off?  Is it the similarity to all the other businesses out there?  I guess people come to photography to escape what they see as a deadening routine.  They don't want to be told that, in order to be successful, they will have to do the same sort of week in and week out marketing that the dry cleaners and the coffee shops have to do.  People have to know where to find you, what you do and how you charge.
If you want to stay in this charming business you also have to know how to charge and how to license the rights to your photos without giving away the store.  But really,  most people flock to the business because they find the gear to be so much fun and the anticipation of shopping for and then buying even more gear even more fun.  This seems truly to be a business where nearly everyone seems to think the grass is always greener in the next photo system and once they buy brand X they immediately notice the emerald shade of green across the way at the other manufacturer's field.
So, I understand why my publisher chose to lead with the collage below.  It represents that subjects that are covered in the book.  They won't be blamed for bait and switch.
I've done a  bunch of lighting workshops and a well received portrait workshop but now I'm thinking of doing a marketing and business workshop based on the subjects I cover in the third book.  I guess my question to all my readers is whether or not you think there would be any interest in this sort of workshop.  I suspect that the people who are already in the business will shy away for the same reason that owners of particular cameras feel duty bound to defend whichever choice they've already made.  If you just spent your yearly marketing budget on a page in Black Book (if it still exists) you probably don't want to be told that you could have stretched your dollars further in another area.  That leaves people who are in other fields who are thinking of switching.  And I don't think they'll be interested either since they are sure to be invested in the idea that it's a great and profitable business with more than enough profitable room for all comers.  The last thing they want to hear as they contemplate some sort of move is how hard the business has become and how much work they may have to do to become mildly successful.
At any rate, I'd love some feedback from the usual characters (whom I've come to count on for some really good and sometimes face-slappingly jarring advice).  Should I share my last few secrets?  Will anyone come to a workshop about writing contracts, personalizing model releases, dealing with billing and getting clients to pay you on time?  Will people be as excited figuring out a good marketing campaign as they are about opening the box surrounding a new D3s or 5Dmk2?
Or should I take the easy way out and keep doing the lighting workshops?  I guess everyone could just buy the book and be done with it but my wife, Belinda, constantly reminds me that everyone learns differently and for everyone who learns best from reading three or four learn best by watching and doing. 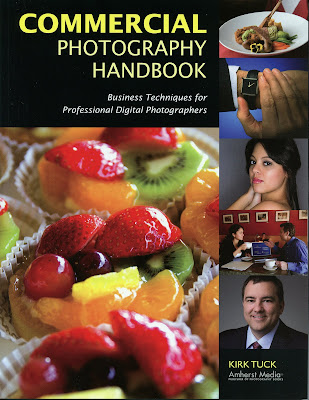 With that in mind I wanted to let everyone know two more things that are important to me.  First, the fourth book, Lighting Equipment, is at the printers and should be at Amazon and wherever else fine photographic books are sold, by the end of April or the beginning of May.  This book is a look at all the different tools you can use to customize your lighting so that, in the end, your photographs really look like your photographs. It's already available for presale at the big A.  I ordered one for my mom.  I hope she likes it. My favorite part of the book is the look at all the stuff they use in the movie industry.  Nice to know now that everyone is rushing to get their chops up to speed in the world of video....... 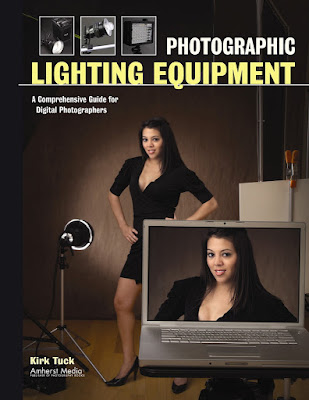 My other important thing is more in the way of a disclosure.  I want to always be honest with all you guys and I feel like any time a photographer develops a relationship with a camera manufacturer that goes beyond a hearty hello, the offer of a cup of Sprite at their booth and the surreptitious passing of a free lens cleaning cloth or two during a store visit by a rep, it's time to fess up and let people know.
About a week ago the folks at Olympus approached me about being a speaker at the upcoming Photo Expo sponsored by Precision Camera and Video, here in Austin, Texas.  Happens in May.  Details to follow.  I'm going to put together a few slide shows and show my work and talk about the way in which I use Olympus cameras and lenses.  In exchange I'll get one or two pieces of gear that I always wanted to own but didn't want to dip into Ben's college account in order to afford. I can promise you that I won't be swayed by Olympus's largess but where you want to peg that on the credibility scale is now totally up to you.
And before you think this gives me any clout with Olympus remember two things:  I still don't have an EMA-1 microphone adapter for my EP2 cameras and second, I bought nearly all of my very cool Olympus gear long before anyone made me an offer I'd feel silly to refuse!!
Would it be over the top to point out that the image for the book cover just above was shot with an Olympus e3 and one of their really nice zoom lenses?  I didn't think so.
Want to know what I know about the business of photography?  Try this yummy book: