It's the little things that make life so interesting....... 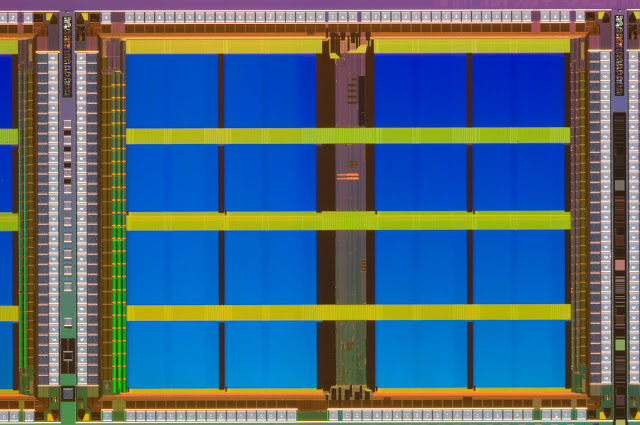 From time to time my clients at places like Freescale, Motorola or AMD will come alive and call me with an assignment to photograph a chip "die".  The schedule is usually as short as the fuse on a bottle rocket and the part is usually a beta product with a blemish or defect.  If I remember correctly this little beauty was about 2 or 3 mm in width.  It also had some scratches.  I needed to make it look intriguing and needed to do it by end of next business day, 22 hours and counting.

I don't know if you routinely photograph anything that small but they are tiny enough that a sneeze sends them flying and a piece of dust looks like a boulder on the landscape of the die.  To get the kind of magnification you'll need you'll want to have a bellows to stick in front of your camera and you'll want to use a fairly short focal length lens that's computed for high magnification.  Maybe a 12.5mm Photar or a 25mm Zuiko lens made specially for magnifications that start at five times lifesize.

Many nasty things happen when you go above 5x lifesize.  First, the finder gets really, really dark.   The image gets really hard to focus.  Wide open on an f4 lens the depth of field becomes the width of a human hair.  If you stop down you are immediately confronted with sharpness robbing diffraction.  You must be exactly planar from the sensor plane to the lens plane to the subject plane or you will never achieve sharp focus over the whole object.  We're talking fractional degrees of angle here.

Finally, the chip die is actually a dull finished piece of silicon.  The bright colors on these samples and on samples you've doubtless seen elsewhere is the painstaking end product of moving lights around at different angles and different altitudes until your get a reflection of a layer and the refraction of the reflection creates a dominant color.  Shorter way of saying that:  You gotta move the main light all over the place till you get a blast of color.  But it's never the same color twice.

There are hundreds of ways to get sabotaged. Could be dust in the air, could be an alignment just a tiny bit out of whack.  You can spend hours tracking it down.  But what the heck, the fun is in the challenge.
In the old days the dies were giant.  Some where half an inch by half an inch.  Easy as pie.  We routinely shot that stuff with 4x5 sheet film.  But every 18 months the chip dies get smaller and smaller.   At this point it's no longer feasible to put a standard macro lens like a Nikon or Canon 50 because the lens is too long to achieve the magnification you need on the available bellows.

In a few more 18 month generations this kind of documentation will  probably need to be done on low mag industrial microscopes with oculars for camera attachment.  Right now, if you can do this reliably you'll be in demand.  Not as glamorous as shooting lingerie models but I'm going to be these kind of assignments actually pay better. 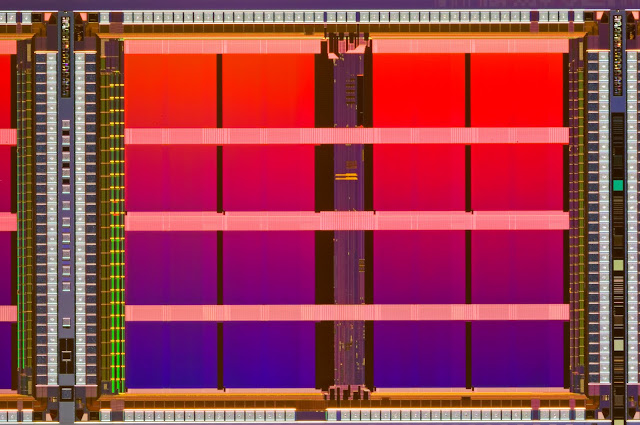 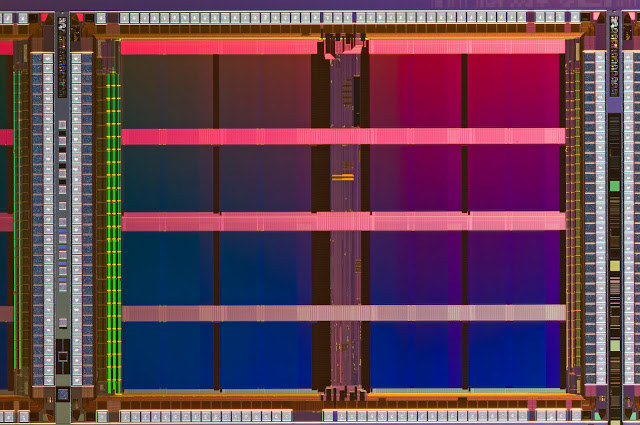 Wouldn't you hate to solder the leads onto the connectors by hand?  Makes me laugh just to think about it.  I hear the micro chip industry is coming back to life.  Should keep some people a bit busier.  They sure are sexy.  Wish I could tell you which camera but I've been through so many I can't.

Next post.  Why some people (me) change cameras a lot.  Conjecture from a famous psychiatrist.
Posted by Kirk Tuck, Photographer/Writer at 16:49 12 comments: