Continuing look at an Annual Report. The wide shot. 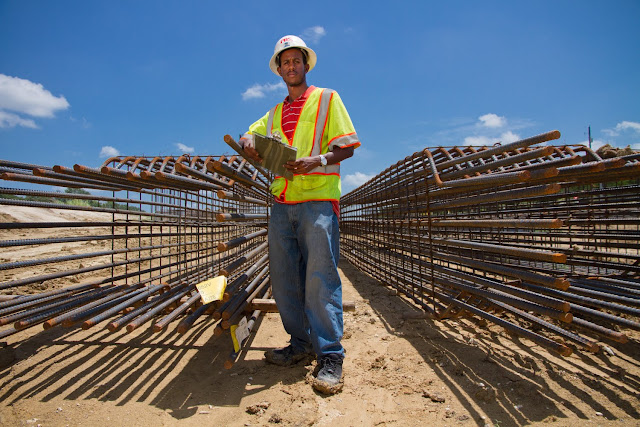 The wide shot.  These rebar constructions will eventually be placed upright, within a form and will serve as the reinforcement for concrete columns.  They are destined to become the support for elevated highway structures.  The subject is an engineer with the firm that creates them.  Canon 7d,  15-85 @ 15mm.  One Canon 580 EX2 from the left side of the frame.


Another blog about the start of the assignment is here.

Just another "hotter than hell" day in central Texas.  Someone will ask why we didn't do this shot some time other than the middle of the day and my response would have to be the question, "When were we supposed to do the shots we did earlier and later?  On an annual report project you have a list of images that you need to produce and usually it's on a pretty tight time frame.  A lot depends on when the people or projects you need to document can actually be scheduled.  Usually a writer is writing or has written a small essay about the person you'll be scheduled to shoot.  If you can't oblige their schedules you'll soon have some gaps in the project and that may eventually lead to gaps in your client list.

This engineer was ready to go at 1 pm so I was too.  We just finished a shot on the other side of the highway from this location and it was on dry asphalt.  For that shot we used the big lights.  But as we started across this field several thoughts occurred to me:  1.  Oh my God!  This entire hundred yard trek is through the thickest, grimiest mud I've ever encountered.  In some places our feet would sink in up to our ankles.....  2.  There's no dry ground for the electronic flash generator, the stands or the sandbags.  Yuck.  And my final thought:  We're starting run behind schedule.....

So this is one of the few series of shots that's not diffused by a four by four foot diffuser or lit with a 1200 watt second powered flash in a softbox.  I brought the most intrepid person from the crew along with me through the sea of mud, oblivious to the insult her brand new track shoes were receiving and we brought along the bare minimum of gear. She held the flash and modifiers and aimed them at the subject, modifying her position as necessary.  The Canon 7D with the 15-85mm lens,  the Canon 580 Ex2,  an eight foot ttl extension cord and a Speedlight Prokit mini softbox with 1/4 CTO filter plastered on the front diffuser.  We used the high speed FP setting for most of the shots and I did some color shifting in the post processing to enrich the blue of the sky.

The image above is pretty much fun.  The 15mm setting on the lens does fun perspective stuff with the rebar structures.  I like the image below best because I like to see faces closer up. 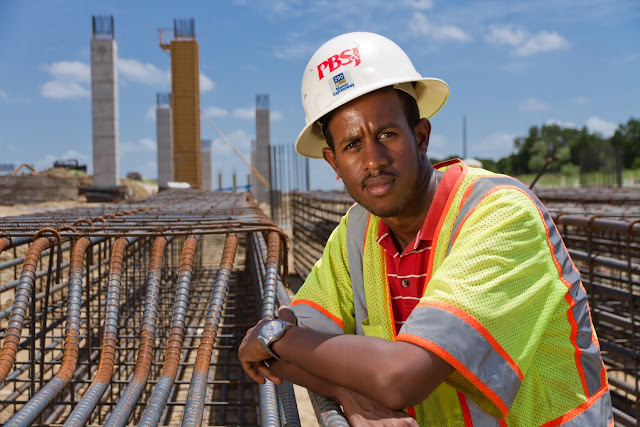 And the tight shot.  All the same specs but with the 15-85 zoomed in.  You should see the full size file.  Nice detail.  Very nice.

You can see how versatile the lens is in these two variations and, to my eye, how sharp and well behaved it is as well.

When we get our shot list neither the client nor I are exactly sure what we'll find when we venture out onto the locations.  We both saw and really liked the giant rebar constructions when we stumbled across  them.  Neither of us anticipated the treacherous mud we'd have to wade through to set up the shots.  We also learned that the extra layer of a safety vest makes uncomfortable look comfortable.....

I was pleased by how well the small flash worked to fill in the subject's face and less pleased by how well hidden and by how obtuse the menu item is for setting FP flash on the Canon cameras.  It would be nice if they just asked their friends at Nikon to show them the right way to integrate a flash feature set....

We stayed through ten or so variations of pose and composition, probably 100 raw frames in all before beating a hasty retreat to the nirvana of air conditioning.  Here's another little tidbit:  You leave the house in the morning with your work clothes and boots on and then, in the middle of the day, the boots get totally trashed with thick sticky mud.  You'll be leaving this location to go to an engineering office in a class A office tower with plush carpeting and crisp, upholstered furniture.  What's a pro to do?

Well, of course you have you emergency change of clothes in the back of the car.  Right?  Right.  A clean pair of black sneakers (from Target) a second pair of pants and a dry shirt that doesn't make you look like a safari adventurer temporarily lost in the concrete jungles of downtown Austin.  Nothing like changing in the bathroom of the closest McDonalds.  But,  you see,  we were on a schedule....

Stay tuned for another installment from the AR project.