A fun video project. Kids are always fun to work with....

You can see it much bigger on Vimeo:  http://vimeo.com/15334802
Will van Overbeek and I were hired to do a video project last week.  Several organizations here in Austin were being awarded by The Austin Children in Nature Collaborative and the videos will be used as showcase introductions at a special program at the Austin Four Seasons Hotel.  We needed to make an introductory piece for the award program.  The only problems we had were:  No script, no actors, no direction and a lot of rain.  Since the program celebrates getting kids outdoors the rain was kind of a major issue.  The rest just go with the territory.

We made it to the Austin Nature Center just in time for the big rain.  But it let up after a while and we got to work.  For this project we used a Canon 7D

,  a Gitzo tripod with a Manfrotto fluid head and a small, LED light (more about that later....).  For this project I operated the camera and Will did the sound.

I think we were all pretty amazed at how well the sound turned out.  The center is located near a major, elevated highway and there's random noise coming in from every direction.  Our method is to put the microphone on a "fish pole" and get it in as close to the speaker as possible without getting an image of the mic (or its shadow) in the final video.  We found the ALC (auto level control)  on the 7D does a pretty good job on its own.

Our biggest challenge was to get interviews with four and five year old kids.  They're not really good at hitting their marks and they don't "do" lines.  But with a smile on your face and a big enough memory card you're sure to get something.....then all you have to do is edit it all together.  I like sound effects but I don't think Will is as enthusiastic about them.  He did allow me to add a few "dinosaur roars", "chimpanzee chatters" and "jungle" noise from the sound library.  I think it's fun.

Since we're all about keeping things simple and fun we jumped right into editing this thing with iMovie 09 from Apple.  We used an old laptop and a calibrated, 23 inch Apple monitor to do our edit on.  We did add a firewire 800 outboard HD to the mix.  No stutters in the editing or the output.  The edit took about an hour and fifteen minutes this morning.

We did some interviews with grownups in order to get information across.

While we were waiting for the rain to stop we did an interview with the program director from the Center.  I was happy to have the new little LED

light with me.  We needed a bit more light to brighten up our talent's face.  The light is called a DLC DL-DV60

and it's the perfect light to keep in a side pocket of your camera bag.  It uses 60 individual LEDs to provide a fairly small, bright source.  You won't be overpowering sunlight with it but it might be just what you need in a pinch for a little more punch.

I first played with a light like this one when I was writing my book, Photographic Lighting Equipment.
The one that was available at the time was a LitePanel Micro from LitePanels.  It was about the same size as my new DL-DV60

but it put out significantly less light.  It also sold for somewhere near $300.  The one feature that the LitePanels Micro

had that I did like was the ability to turn the light down with a control knob.  It was also cool that the color temperature of the light didn't change as you turned down the power.  The DL-DV60 doesn't have any control other than on and off.  But here's the deal:  It's a little bit shy of $100.  The one "feature" it does have (and I'm still not sure if I like it...) is this:  it comes with a rechargable Li-ion camcorder battery for power.  It's a common Sony battery so replacements are widely available and it does have enough power to punch out light for about an hour and a half.

In the video we used the light about seven feet away from the program director and about three feet above her head.  It was enough to minimize shadows on her face and bring her a bit forward from the tungsten lit room.

I liked the DL-DV60 enough to buy a second one.  They can be clipped together to make little light banks and I think that's a fun thing to have in a pinch.  I've also order some bigger ePhoto panels that plug in the way and use hundreds of individual bulbs.  I'll let you know how those work when they arrive.

Will and I are starting to get into a groove with our little video projects.  It's different than still photography but in some ways the same.  Directing is always fraught with peril that mostly becomes obvious at editing time....... 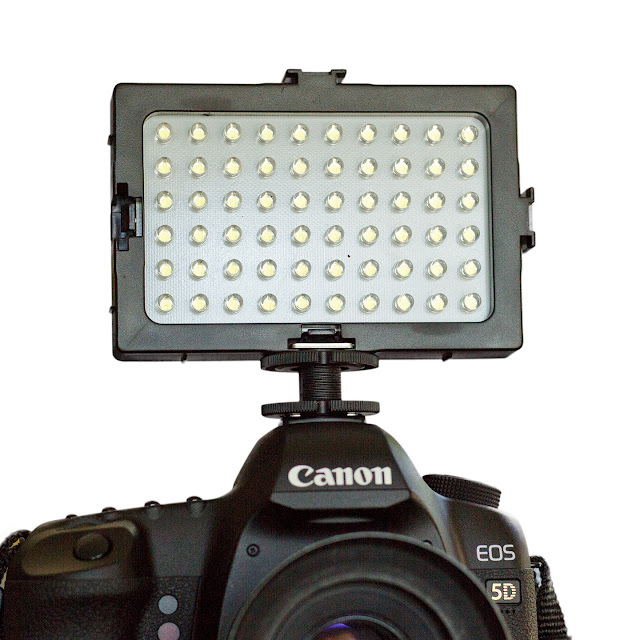 This is the DL-DV60 as it sits on top of my camera.  It's too bright to aim directly at innocent people indoors without some sort of diffusion but it works well in conjunction with other light sources.  It also works well as an accent light in the same way you might use a flash on an off camera cord, over to one side.  The benefit is that you don't ever need to sync it with the camera.  It also doesn't get too hot and it doesn't flicker.  It's pretty perfect for a combination/crossover photographer/videographer.

I'm accepting more and more video projects and finding that I like the process pretty well.  I try to stay away from clients who want to micro-manage projects.....it's almost a given that they will slow the editing process down to a crawl.  So far all of the clients have been perfect.  And the Canon cameras are working well.

Posted by Kirk, Photographer/Writer at 16:25 5 comments: