What do commercial photographers do when they go to family weddings? 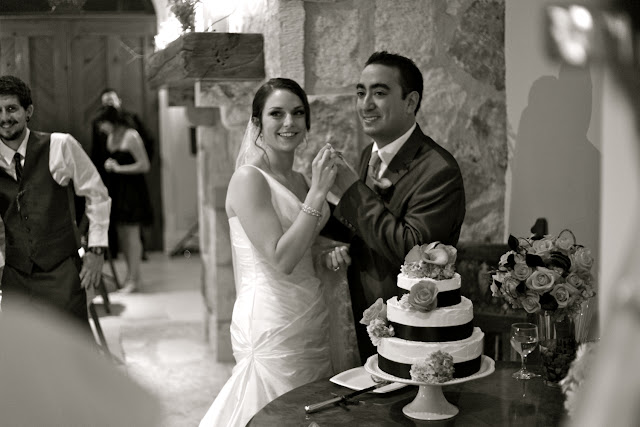 My niece got married to a really nice guy last weekend.  Do I think the whole marriage thing will work out for them?  Well, yes.  They're both sweet, practical and they like each other very much.  They threw a really nice wedding with a tasteful and happy reception.  They did so many things right that it didn't surprise me when they didn't ask me to do the wedding photographs.  They both work in the ad business and they seem to know that there's a difference between species of photographers.

My niece asked my advice and then selected a San Antonio wedding photographer.  And judging by his unflappable attitude and his assured camera work, not to mention taking great advantage of the really nice available light,  I think he and his second shooter did a hell of a job. 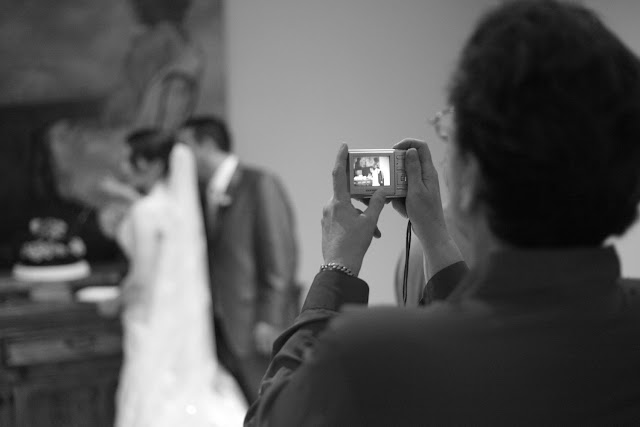 If you've read my blog before you know that I take a camera with me everywhere.  If I were on the edge of death and rushing to the emergency room a priority question would always be, "Leica M with film? or Canon 5d2 for low light?"  So, of course I dragged my camera with me.  I did make it a point to stay far from the real working professional.  I didn't bring a flash.  And I mostly kept a "nifty fifty" (the Canon 50mm 1.8) glued to my camera at all times.

I did the obligatory grown up wedding things.  I made sure my kid had his suit on straight and his tie tied.  I made small talk with the relatives and relations.  I congratulated the couple and the families with great sincerity.  I smiled lovingly at my wife.  It limited my Champagne consumption and didn't dance on the tables.  But there was still a lot of dead time to fill.

So I kept my camera with me and tried to shoot some "in between" moments.  I always enjoy the "media press" at social functions so I tried to get some of that........ 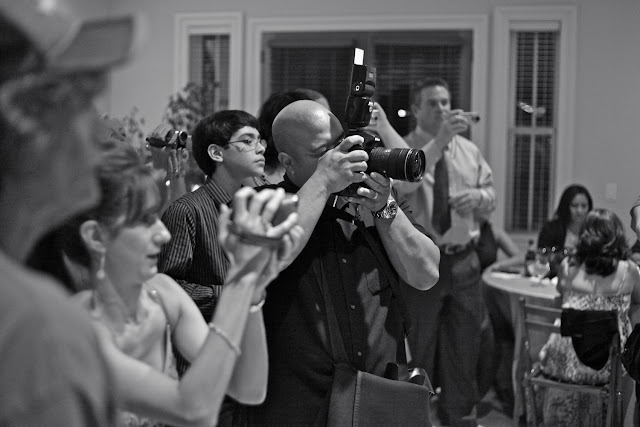 And, of course I needed a shot of the real photographer and his second shooter directing the group shots.  But I stayed pretty far back and didn't try to scalp any of his or her set up shots.  I figured that they were doing the hard work they should reap the rewards.  No outrageous gear on display.  Just Nikon 700D's and the requisite 24-70 and 70-200's.  Little SB-600's in the shoes but not used very often.  These guys were good and it's obvious that they had a well oiled mental checklist working in their heads.  Just enough direction to pull everyone together and make great shots, not so much direction that they got in the way of the socializing.....A real photographer makes it a real event. 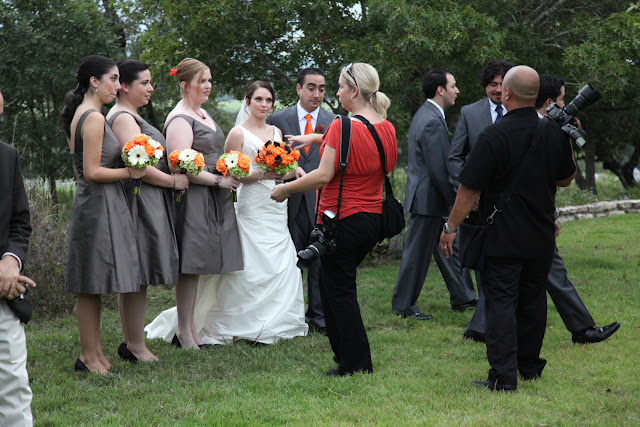 I took a lot of photos of my kid, Ben because he wasn't on the other photographer's radar even though he grew up with his cousin and they are pretty close.  Ben is very patient with me but he quickly gets tired of the "paparazzi" treatment.  I couldn't help it.  I thought his suit looked cool....(24-105mm Canon 5d2) 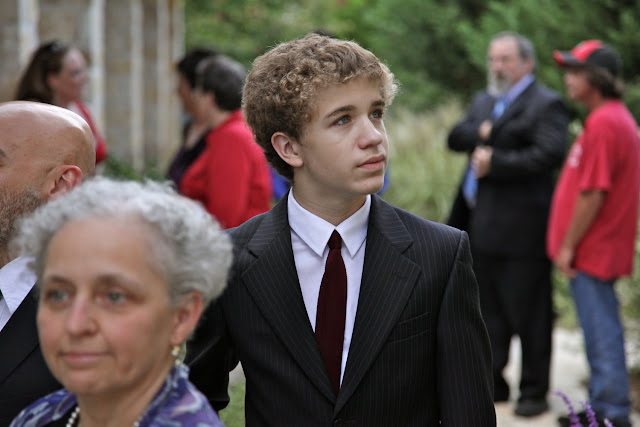 And I wanted to put the "bokeh" of the 24-105mm zoom to the test so I had to grab a few shots of Ben with the bride's-brother's-girlfriend out of focus behind him.  Looks  pretty okeh-bokeh to me.... 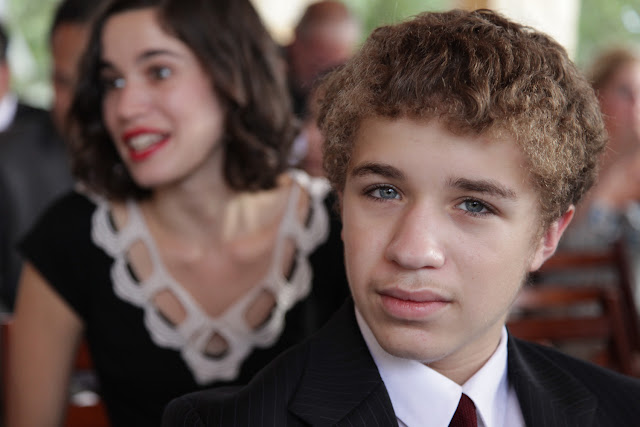 But then I felt a little guilty using my niece's wedding as a lens testing laboratory so I took a shot of my nephew's girlfriend as the primary subject instead of the "bokeh baseline target".    And I've decided that anyone who doesn't like the 24-105mm is pretty daft.  It's a good lens.  Pretty sharp wide open and the IS is really good.  Specially if you're going for the available light thing. 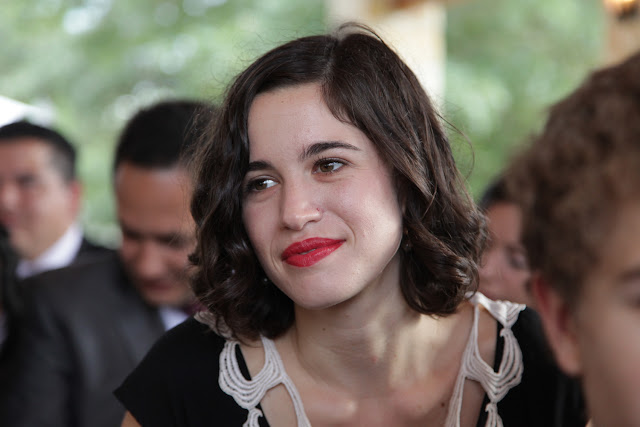 This niece is from my wife's side of the family so my wife decamped from Austin and headed to Comfort, Texas the day before to help get everything ready and to visit with family coming in from all over the place.  Ben and I were more economical with our time.  We dropped the dog off at the lux kennel and headed out in the mid-afternoon on Saturday.  Comfort is a two hour drive down some bouncy country roads so I put in a little extra time for surprises in the low water crossings.  Ben read novels on my Kindle.  (We both have found that one can read faster on a Kindle......burning through books....).

Around 10 pm, after dinner, the cake cutting, and toasting, and the inception of the dancing, Ben came over and asked the  "14 year old" question:  "How long do we have to stay to be polite?"  We were back on the road and back in our Austin house by midnight.

I'm anxious to see the professional photos.  There was so much fun stuff to shoot.  It was hard keeping my camera on the strap and out of my hand.  But I figure that if you hate having folks leaning over your shoulder.......you better do things the way you want your karma to flow. 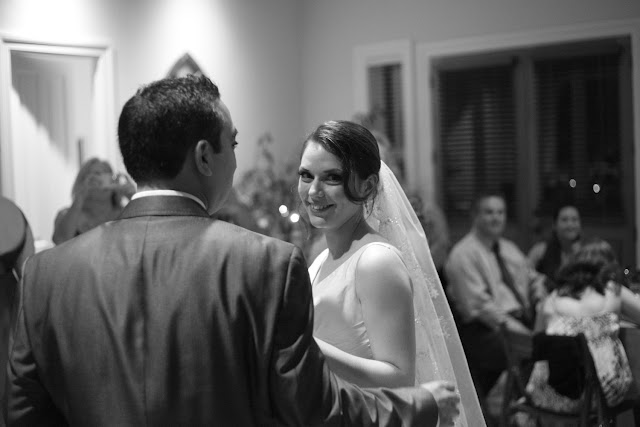