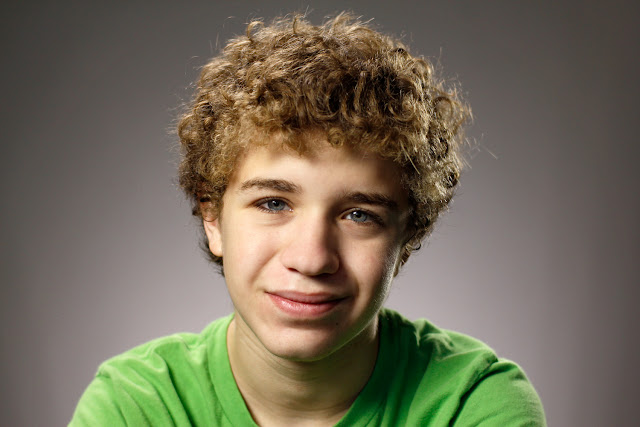 light panels and I didn't do any correction to the files.  Yesterday I took delivery of the 1000 LED panel and I decided to do things right.  So I set up a quick lighting design along the lines of what I would do for a corporate client and I asked Ben to come and sit for me.  To start with this is a four light set up.  I used the 1000 panel, which is 14 inches by 14 inches, as my main light.  It's covered with white diffusion material from my Westcott FastFlags kit, held in place with clothespins attached to the light's built in barn doors.  I felt that the size of the light source was right on the borderline for me.  A bit small to use without a bigger diffusion panel.

The background light is a 500 LED panel (8 inches by 14 inches) placed on a floor stand about four feet from my 18% (painted) gray wall.  It is used at full power as was the main light.  The I added an overhead hair light.  Also a 500 LED panel at full power but with the addition of Rosco frost gel over the front.  Finally,  I added a kicker light from the opposite side of the main light and about eight feet behind Ben.  This light is also diffused with a Rosco diffusion material but it's a light enough diffusion that one can still make out the individual rows of LEDs shining thru.  Over the the right hand side there's a 4 by 6 foot black panel to kill any light bouncing into the photo from the white wall.

I set the camera at ISO 400, the aperture at 2.8 and the shutter speed at 1/160th of a second.  Right where I'd want it to be if I could have anything I wanted.  To my eye the Canon 60D is pretty noiseless at ISO 400 and I would have no hesitancy shooting there for client jobs.  I set a white balance using the gray side of a Lastolite collapsible target.  I keep a small one in my case all the time and a large on in the studio.  It's quick and easy and saves a lot of bad guess work after the fact.  The balance was pretty much perfect.  I DID NOT use any sort of color filtration on the lights and shot intentionally in Jpeg.  I did not color correction or color temperature shifting in PhotoShop.  What you see (except for taking out a skin blemish or two.....) is essentially what came out of the camera.  I misjudged the shadows a little bit so I used the shadow/highlight control to open the shadows up with a setting of 3 and a small radius.

What my test shot showed me was that, in the absence of a bunch of mixed lighting,  I could forgo the magenta filtration I talked about in a previous post and use the lights in their raw form with very good results as long as I took the time to do a custom white balance with a known source.  I think that, with the custom white balance, the flesh tones and the gray background are right on the money.

The benefits of the continuous light shooting were several:  In the first instance I was able to take a very, very accurate light meter reading of the gray target.  No flash meter.  Secondly, the lighting was very much "what you see is what you get."  My only caveat there is that assessing the amount of shadow detail is alway just a bit tricky because the human eye seems to be able to look into shadows better than the camera sensor.  Finally, Ben is a "blinker" and the ability to find an expression I like and shoot as fast as I liked was instrumental in catching a good smile.

The manual focus lens was a blessing as once focused I didn't worry about the AF sensor changing focus on me to some other area.

The quality of light was just what I wanted with smooth, even fall off and enough control to make customizing my portrait lighting design a breeze.  The next step will be heading out of the studio to use the LEDs as supplemental lighting in bright daylight.

Random news:  I've been invited to speak and do a workshop in Kuwait.  We haven't worked out the dates and details but I'll let you know more as it transpires.  I am very excited by this.  I've just completed several advertising  projects and am looking forward to doing a large project in November for a high technology business incubator here in Austin.  As part of the parameters of that project, which will be shot on locations at the client's headquarters and on the UT campus,  I will be lighting everything with the LED panels.  Should be a good, high production, trial by fire.  Finally, will be holding a workshop here in Austin in January to show how to light with all the  major kinds of light available to photographers.  From big hot lights and studio flashes to small flashes, LED lights and Florescent Lights.  As soon as I finalize dates and pricing I'll let everyone know.  This will be the first workshop in which I'll demo how I use each light and then break up into teams of models and photographers so that everyone can give it a go with each kind of light as I supervise.  Should be fun.
Posted by Kirk, Photographer/Writer at 14:25 15 comments: