On location with a box of lights and a few ideas.

If you've been following the blog for any amount of time now you know that I get bored using the same stuff to make photographs with.  The idea of doing the same thing over and over again is not very attractive to me.  I know that for everyone like me there are a bunch of people who want to master one set of tools and use them until the end of time.  I guess you could have done that in decades past but the pace of change seems to accelerate with every passing day.  The things we can do with the newest tools were unimaginable seven years ago.  The high ISO performance of the cameras.  The low "buy in" cost of lights.  Even the avenues to learning have exponentially increased.  You can embrace change and have fun with it or you can hope that "this will be the last camera and lens I will ever have to buy!!!!!"  and stick your head in the sand.  While the profession is rife with nostalgia I have only nostalgia for the fees, not for trying to make good, quick work with a recalcitrant Hasselblad 500 CM and a 2000 watt second Norman flash pack.....
I've been playing with LED lights with the same enthusiasm that I had when I started playing with Nikon SB800 flashes and I came to realize that I could replace my heavy duty (and just plain heavy) studio flashes with a Domke bag full of battery powered, hand holdable, computer controllable flashes.  I think I'm starting to get a handle on the color rendering and the difference in power output vis-a-vis flash and I've been impressed with what can be do with a very high tech/low tech product.
Why do I say "high tech/low tech product"?  Well, the technology of LED lighting is pretty cool and all based on semiconductor processes.  These are really the first semiconductor lights to hit the market in a wide scale way.  And I say low tech because they offer all the real functionality of a light bulb.  You can turn them on and you can turn them off.  One some models of LED panels you can also dim them. And that's all they do.  They don't calculate fill, they don't auto expose and they don't do anything smart.  The panels just sit there and put out light.   That's a pretty low tech set of features to give to a generation raised on "smart flash" but there are some benefits too.  Since the light from the panels is continuous you can actually see what you are getting while you're shooting.  With continuous light you've instantly cut your "recycle" time to zero so you can really lean on that motor drive if you want to.  If your camera will do 10 fps so will these lights.
Anyway,  I love to take risks so when one of my favorite agencies asked me to help them with a project I told them I'd love to do it if they let me use my new toys to do the job.  Surprisingly, they agreed.
I packed some big LED panels and some small ones.  Here's my box full of the small ones: 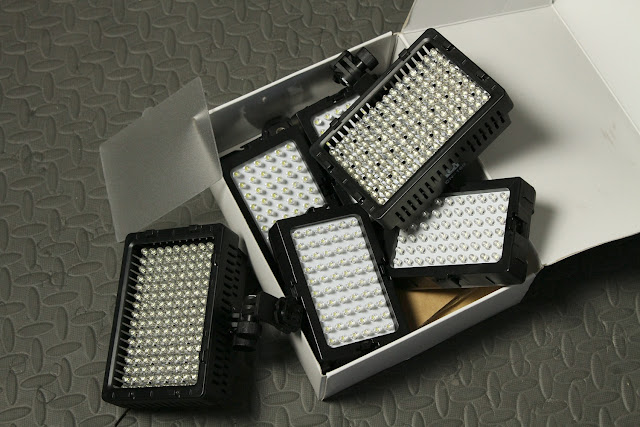 I've been buying little panels since I first got interested in shooting video.  They come in handy and I like em.  The first generation I bought are the littler ones.  The come from Dot Line Corp.  I call them DLC 60's because they have 60 LED's

on them.  I've done some fun stuff with them and I love the fact that I can click all four panels together to make a small soft bank or a thin or thick strip light.  They are the most primitive panels I own because they have nothing but an on and off switch.  (FTC statement:  All these panels were purchased from either Amazon.com or Precision Camera.  No manufacturer or merchant has given me any free lighting product.)
Just before I started working on this project I also bought two new panels from an Amazon vendor.  These are the slightly bigger units in the photo above.  These panels have 160 LED's

each.  They put out about one full stop more illumination than the smaller units and have a number of features including:  A dimmer knob that seamlessly allows you to drop the power from full to next to nothing.  A battery check button with a four LED read out on the back.  The ability to take a ton of different batteries.  A filter slot and supplier diffusion, tungsten and slight green correction filters.  And an articulating mounting foot.
In practice I find the 160 LED lights to be a wonderful compromise between the lower power of the smaller panels and the size and bulk of the larger A/C panels.  The only thing that would materially im prove this product would the be ability to link together multiple fixtures the way you can on the DLC 60's.
Pricing on Amazon can be wildly kinetic.  When I first looked at these lights they were in the $90 price range.  The next time I looked the price plunged down to $64 each.  That's what prompted me to buy them.  The vendor I bought them from, Fancier, is now showing "out of stock" but several other companies sell an identical unit and their prices seem to have settled in around $79.  At $64 each they were an absolute "no brainer". 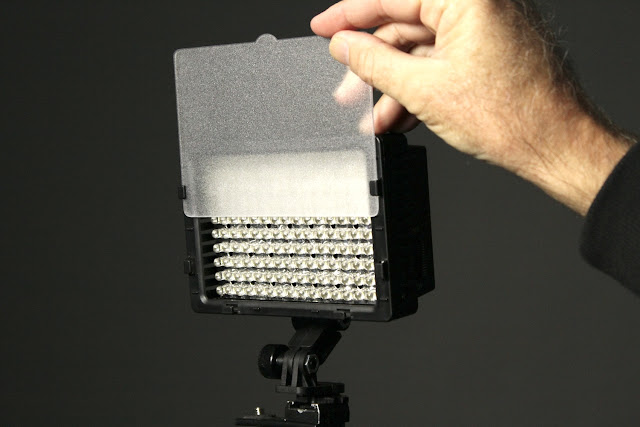 is sold on Amazon.com by Fancier, ePhotoInc., Cowboy Studios and several others. I've ordered product from each of them and it's all worked just the way it should.  Here is the way the filter slot works.  Nice. 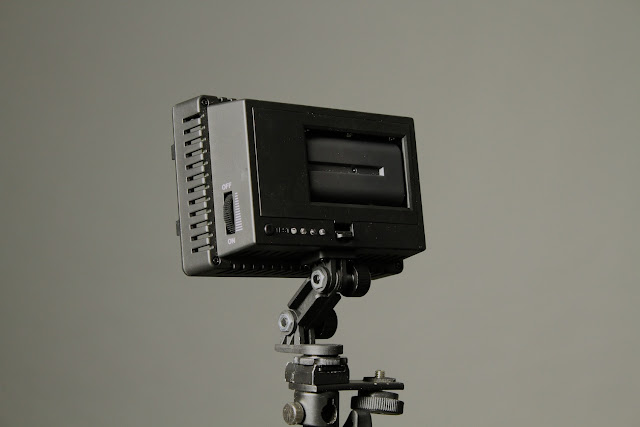 A side view that shows the dimming switch (also, off and on) as well as the shoe mount.  It's articulated so you can put the LED on a still or video camera and tilt it back to bounce the light off the ceiling. 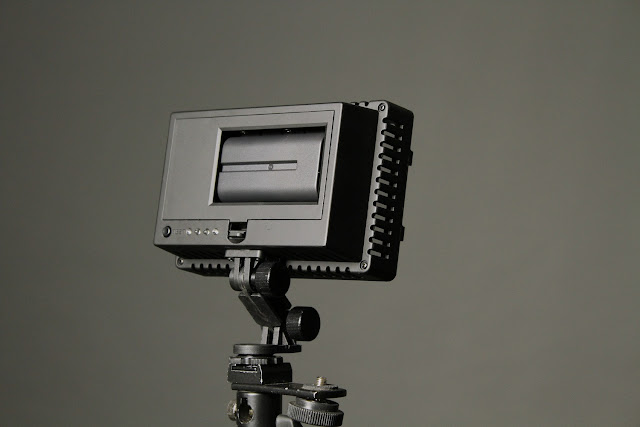 See how the Sony camcorder battery fits into the back area.  If you open the surrounding door you discover that you can also power the units with six double A batteries.  The unit gets warm during operation but not uncomfortably so.

So, I packed up a complement of large and small LED panels and we went to visit the Austin Technology Incubator.  We had a big shot list.  We needed to do portraits of the staff, some of the start up businesses that are currently resident there and even head shots of interns and advisors.  The location was the old MCC building in north Austin.  It originally housed the Micro Computer Consortium and is a great venue to shoot in.  There's a four story atrium that runs thru the center of the building.

We decided to do our first round of portraits on one of the bridges on the third floor just outside the client's front door.  The agency wanted to have images for a website and wanted very narrow depth of field in each shot.  In the past I would have used small flashes in small soft boxes for this kind of work.  Yesterday I just put a couple of small panels on a stand, covered them with diffusion material and brought them in toward the subject until the illumination on their faces matched the intensity and feel of the background.  I was trying to leverage existing light and added light together. 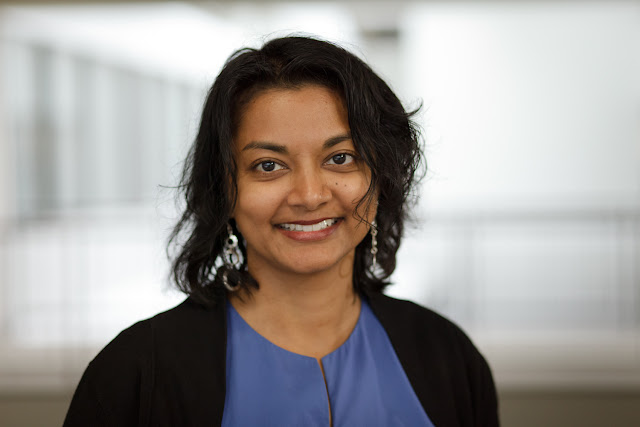 The light is a little harder than I would have lit five years ago but I'm working a bit hotter and a bit contrastier than I have in the past.  Yesterday we worked all day long at ISO 1600 on both the Canon 5Dmk2 and the Canon 60D.  The 60D shows a bit more noise at 100% on screen magnification but responds very well to noise reduction in Lightroom 3.0.

Before we started shooting in earnest I stepped back and made a few wide shots with my art director as a stand in.  You can see how simple the set up is for this shot.  If I wanted to go softer I would have added another two panels to the mix, interconnecting them on the same stand and then put a frame with diffusion about a foot in front of them.  You can see that we're working under the shade of the "bridge" from the next level up while the background is getting full light from the building long skylights.

That's the main reason for adding in the fill light from the panels in the first place. 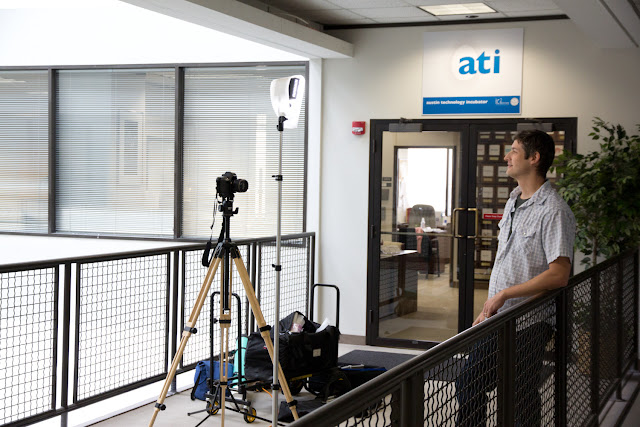 Here are a few notes about using the LED panels:

1.  If you are expecting to use these to overpower the sunlight on a location you will be profoundly disappointed.  They aren't a replacement for big fill flash in sunlight.

2.  The auto white balance on the newest Canons (60D) is incredible.  It's better than the 5Dmk 2 by a good margin.

3.  You'll need to group LED panels or use them in closer than you might be used to with flash to get the right levels.

4.  It's great to have a continuous light source without being anchored to a power cord.

5.  It's great to shoot without having to worry about radio slaves and syncing.

6.  The goal is to become masterful at mixing ambient light with the light from your panels.

7.  You know how the Eskimo people supposedly have something like 50 words for different kinds of snow?  Well I'm starting to build up my vocabulary in the same way when it comes to the different diffusion options.  From very sheer white material to various thicknesses of ripstop nylon to products called "Luxe"  there is a whole world of diffusion out there that most still photographers don't know about.......and every variation has a slightly different look.

8.  Lithium Ion camcorder batteries are cheap, recharge pretty quickly and last a long time.  I've got them for most of my little LED panels.  We shot 700 frames from 10 am till 5 pm yesterday and all the panels made it thru the day without needing to be recharged or have the batteries switched out.  It was pretty amazing performance.

In one of the shots we did in the late afternoon we set up nine different panels.  Some were just scattered on the floor.  Others beamed in from down the hall.  A few were set up in a fashion similar to the way I'd light with other light sources.  It was fun to experiment and really easy to see what I was getting.

I'll repeat it again for all the people who love to do things the same way over and over again.  This stuff looks different.  The shooting style changes.  The areas of focus change.  The shooting techniques change.  And none of this is really a bad thing.  In some ways it's just the continuing evolution of photography brought about by digital technology.

We're past the bleeding edge with this technology and we're joyously embracing the ever accelerating changes.  Hop on in.  The water's fine. 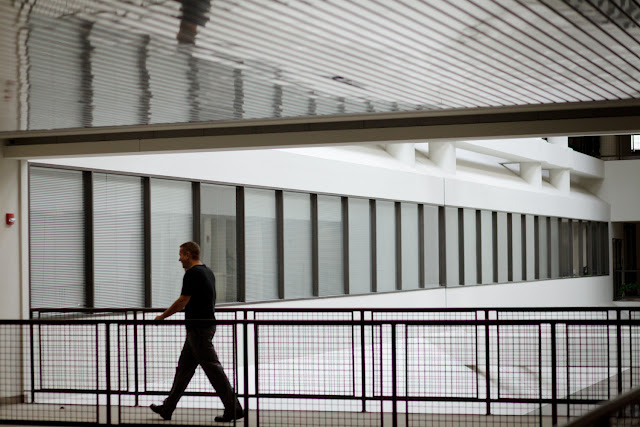 Posted by Kirk, Photographer/Writer at 14:31 8 comments: