We've got hard light if you want it. 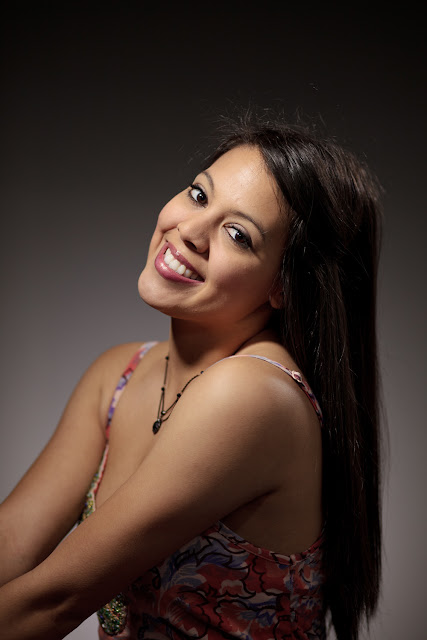 Want to know how I use LEDs as softlights?  Read the proceeding blog.  I cover my favorite technique there.  But I always wonder how things look with harder light so when I had Noellia in the studio today I gave it a quick test.  All three of the panels you can see in set up shot below are either 160 bulb LED panels (measuring about 6 by 9 inches) or  my favorite light, the 183 Bulb version (complete with its own big, lead acid battery pack.  That one is 90 degrees to the left of the camera position and lighting Noellia directly.  I'm using the small diffusion panel in the slot of the front of the fixture to soften the light a bit. The next light is the one that appears on the far left of this photograph.  It's bouncing into the diffusion panel on the opposite side of Noellia to add some needed fill light.  The final small panel is the one on the far right of the photograph which is providing a back/hair light for the image.  The background light is one of the 500 bulb A/C panels running at 1/2 power (two banks instead of all four). 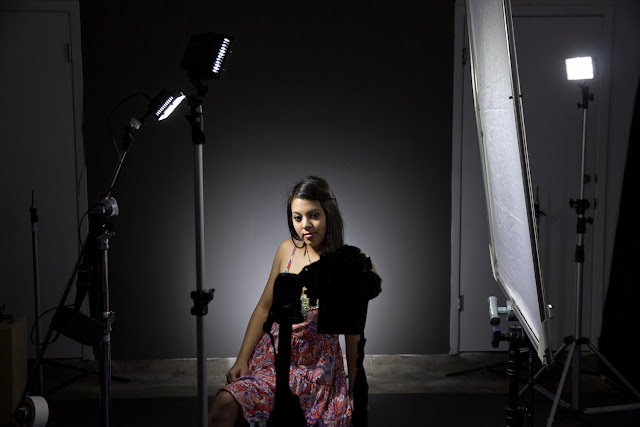 I hated doing hard light with flash because light placement is so critical.  With the LEDs I can see the effect as we build it and I can see if I've turned my model in the wrong direction or not while I'm setting up, not while I'm chimping.  Might not make a difference to you but it makes all the difference in the world to me.  I want to set up one shoot often (SUOSO).  Not: Chimp, chimp, chimp, chimp, shoot....
What were the technical parameters?  Glad you asked.  We shot with a Canon 5D2,  the almost never mentioned but incredibly good for the money, 100mm f2.  Our ISO was 400 and the final exposure was a comfortable 1/80th of a second at f2.8.  Custom white balance before shooting.  No mixed light.
Funny that we have three different models of LED lights and all of them have the same color balance....
Can you do hard light with LEDs?  Absolutely.
Posted by Kirk, Photographer/Writer at 20:43 4 comments:

Playing around in the studio with the LEDs. 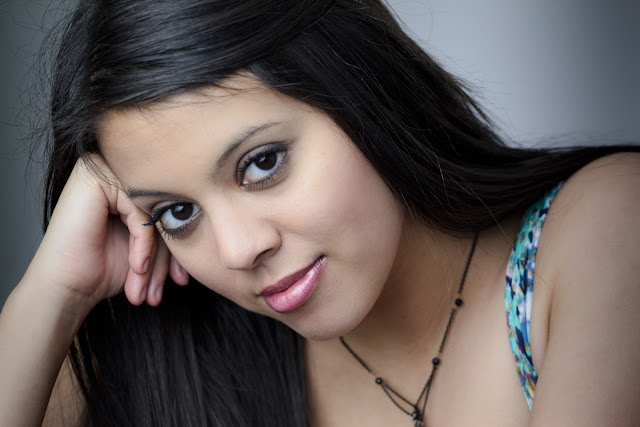 I met Noellia six years ago.  She answered a casting call and we (the ad agency and I) used her in an ad campaign for the Austin Chamber of Commerce.  She was eighteen at the time.  When I embarked on my first lighting book I needed a patient and attractive person to sit still for lots and lots of the example shots.  She is the model on the front cover of my Photograhic Lighting Equipment book as well.  Noellia is an accomplished theatrical actor and she's been in New York City for the last year.  (Maybe that's why I didn't get any photography books done in 2010.....).  But she came back for the holidays and I convinced her to come by the studio and help me with illustrations for my LED project.  We worked for six hours today and got lots of stuff done.  The photo above is something I selected pretty much at random from the horde of thumbnails skating across the Lightroom window at the end of the day.
I used a Canon 5Dmk2 with an 85mm 1.8 for most of the day but I thought I'd throw some 60D shots in the mix just to have a real world comparison.  The 60D was equipped with the 70-200mm f4 L (non-IS) lens.  I used the tripod collar on the zoom and threw the whole rig onto my wooden tripod.  I shot wide open at 1/50th of a second @ 800 ISO.  The actual focal length was 126mm which is pretty darn long for the APS-C format.  The image was lit with three sets of lights and a really big scrim.
First up is the main light:  Two 500 bulb LED fixtures and one 1,000 bulb LED fixture pushed light thru a six foot by six foot Photoflex light diffuser.  The diffuser is mostly forward of Noellia's position and over to the left.  My camera is actually looking thru the edge of the fabric and the light stand.  It's a big wash of light and one of my favorite ways to light people.
I have one 500 bulb LED fixture illuminating the background, which is a gray painted wall in the studio.  I've turned off one bank of lights so I guess I was only using 375 bulbs directly into the wall.......
Finally, there's a little 183 bulb panel over to the back right of the set that throwing some obviously ineffective backlight into the mix.  It's a pretty straightforward design.  I notice that it's a lot easier to color correct the 60D raw files than those from the 5Dmk2.  I'm not sure yet why that is but I'm working on coming up with an answer.  I like the skin tones quite a bit. 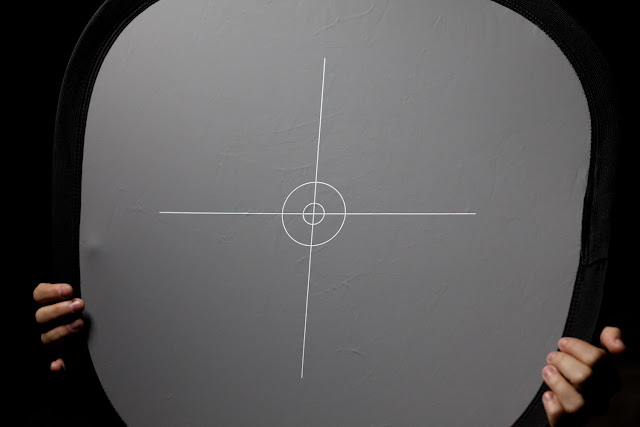 To add to the mystery I did a custom white balance for the 5Dmk2 but when I capriciously reached for the 60D I just set the WB on auto and blazed away.   The gray targets I use are these Lastolite flexible reflectors.  I have them in two different sizes and have come to depend on them for critical shoots with the full frame camera.  I also use the custom white balance on the big Kodaks.  But I do have a work around for color casts........I just throw my hands up and convert to black and white. 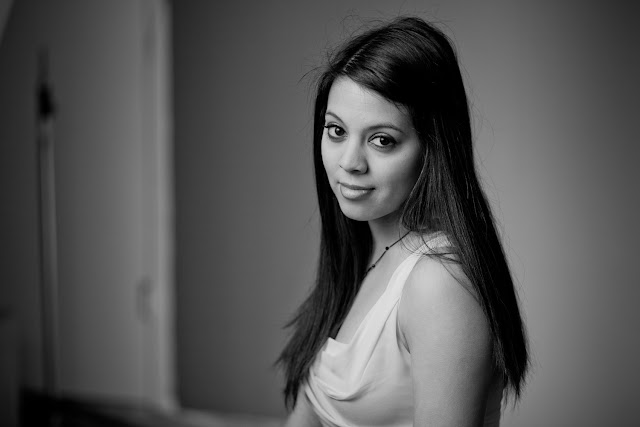 When I got into the rhythm of shooting I found that the 85mm on the 5D2 matched my intention most of the time.  Once or twice I wished I'd used the 50mm but I rarely framed anything that I felt needed to be tighter.

I still think the LED panels are absolutely cool  (literally and figuratively).  Every time I write this a handful of people (who must think that I missed out on the whole flash revolution) write back to me to let me know how deluded I am and to let me know that flash is the modern light of choice.  Not so fast my highly linear friends.  I'm starting to find the sweet spots for these lights and I'm convinced that I'm on to something that will bear fruit.  It's fun to see what happens when I mix the little LED panels with daylight on locations.  Sometimes I feel like flash demands that users clearly see that lighting has been done.  My intention in photographing is to show the subject in a way that I visualize it.  I'm aiming, on location, to make found reality match my concept of processed reality in a way that showcases or elevates the subject without showing the "magic trick" to the audience.

My early mistakes all sprung from one mistaken assumption.  The idea that all lighting was interchangeable and "cross platform" when it reality you, as the artist, are obligated to play to each source's strengths and weaknesses.  I want to get to the point where the deficiencies in my work come from my inability to concept and perform the dance well, not to be limited by my slavish dedication to doing something in the old way that belonged to another light source.  I think I'm getting there.

But mostly I wrote this to share the unalloyed and unspoiled joy of spending a day shooting a pretty girl in a series of experiments for a project that both captivates and motivates me.  Happy to have a busy mind today and someone to help me bring ideas to fruition.  More to come......
Posted by Kirk, Photographer/Writer at 19:35 7 comments: