Anatomy of a public relations job. 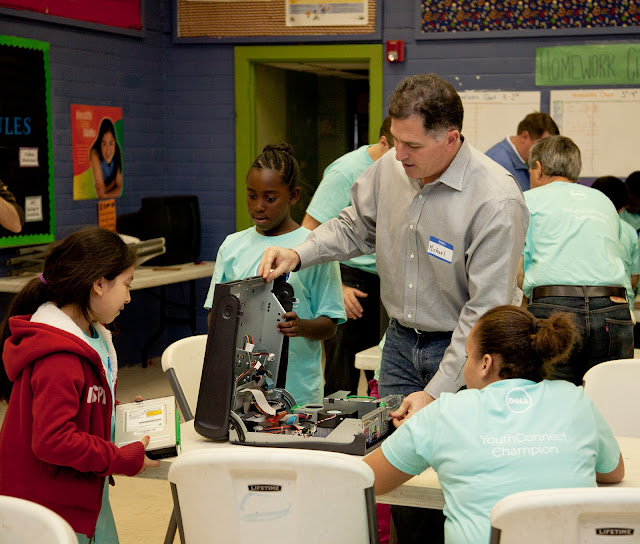 I love public relations.  I love events.  They separate the real photographers from the poseurs.  They help you channel your photo Ninja skills.  A bit before everyone started to close down for the holidays I got a call from one of my clients at Dell, Inc.  Would I be available to shoot an event at a local Boys and Girls Club?  You bet.

Here's the background:  Dell, Inc has been a major, major contributor to the Austin Area Boys and Girls Clubs for over twelve years.  In addition to very generous financial support they've also be proactive in getting computers into the hands of "at risk" kids.  And they've provided the product and funding to set up computer resources within the Boys and Girls Clubs.

The event that I was contacted about was typically Dell.  Instead of just dropping by for five minutes of face time in front of the media the Dell Executive Leadership Team showed up, in force, to lead the kids thru several hours of one-on-one instruction about doing projects......and yes, even homework.....on computers.

My responsibility was pretty open ended.  I got an agenda and a "wish list" of possible shots but no one was looking over my shoulder to approve or un-approve of a shot or an angle.  The expectation was that I'd get good shots of each team member working with real kids on real projects.  To that end I took about five hundred shots and edited them down to about 300 for the public relations team to choose from.  My goal in these situations is to work like a journalist and not effect the scene any more than necessary.  No coaching or setting up poses.  Just straightforward reportage.

There are always several challenges.  People step in front of the camera from time to time.  The lighting all came from old, overhead florescent fixtures.  Nothing was choreographed with me in mind.  I had to anticipate where I should stand and when I should stand there in order to best document an unfolding scene.  I needed to stay out of the way of the Dell in house videographer so I wouldn't spoil his takes.  I needed to use flash sparingly, if at all, to keep the natural look of the scenes.  I had to be attentive to the dynamics between the children and the adults.  But above all I had to move the camera away from the front of my face and actually look, listen and pay attention.  Otherwise I'd miss the good moments and I'd tunnel vision into cliches.

I shot with two cameras.  I got the most use out of a Canon 5Dmk2 with the remarkably versatile 24-105mm f4 L zoom lens.  Even though the light was low and mixed with light through windows covered with different covered appliques the white balance in the raw conversions was quick and easy.  I shot most things at f4 or 5.6 making good use of the Image Stabilization.  At ISO 3200 the shooting shutter speed hovered between 1/125th and 1/250th of a second.  I applied a little bit of noise reduction in the final processing.  The second camera, the 7D with a 35mm f2 on it was there just as a back up.

One wag asked me later, when I was explaining the project to him, why I didn't use the 35mm 1.4 and the 85mm 1.1.2 L lenses instead.  The misconception among people who don't regularly do this kind of work is that we could always use a faster aperture.  But it's just not true.  When you are shooting scenes like the one above you need a certain amount of depth of focus in the photograph to keep all the main players reasonably sharp at the same time.  With a 1.4 lens wide open I would have been able to render Michael Dell pin sharp but the kids would have been rendered as nice, cotton candy, bokeh-blurs.  And the kids were the real story.  If I had been braver I would have chosen to shoot at f5.6 and ISO 6400 but our turnaround was quick and I haven't played with that ISO setting enough to have the confidence I would have liked.

It was a great job to do before Christmas.  Michael Dell and the Exec. team were all warm and gracious and giving to the kids.  No one was rushed.  No one reticent.  The kids loved the computers that were donated and I was jealous that they were getting the latest touch screens monitors in their computer labs.  The Austin Boys and Girls Clubs do such a great job keeping kids safe and well directed.  And the Dell people do such a great job working with the kids.

I headed home after the last executive got into his car with the last rays of a late December sunset in the background.  I checked in with Belinda and headed into the studio to do my initial processing.  I edited down the files in the input screen of Lightroom and imported the 300+ I selected.  I imported them to two different external hard disks at the same time while re-naming them with a job code.  I also meta tagged them and wrote captions for various groups.  I checked my names in the little Moleskine notebook I carry on jobs.  Once I had all the global corrections done I exported the files as 1500 pixel (on the long side) jpeg files.  While that was running I ducked into the house to see how Ben was doing on his homework and to have dinner with the family.

Then I came back to the studio to upload the images to a password protected web gallery, send the links to my corporate contacts and head back into the house to watch an episode of "Madmen" on DVD and relax.  Before I turned in I checked e-mail, grabbed the files the team ultimately selected and postprocessed them in PhotoShop.  No big changes.  Just a stringent color correction and a bit of cropping.  In the Info palette I wrote AP approved captions and sent out the images to the wire service.

Got an e-mail in the morning that everyone was happy and proceeded to write a note to myself in my little journal.  It reads, "One job done.  I'm happy.  They're happy and I hope we work together again soon.  Note to self:  Send thank you cards."

I really do appreciate the great clients out there.  I'm happy and thankful that hey do more than just business.
Posted by Kirk, Photographer/Writer at 21:26 7 comments: