Can't get enough of those crazy LEDs. 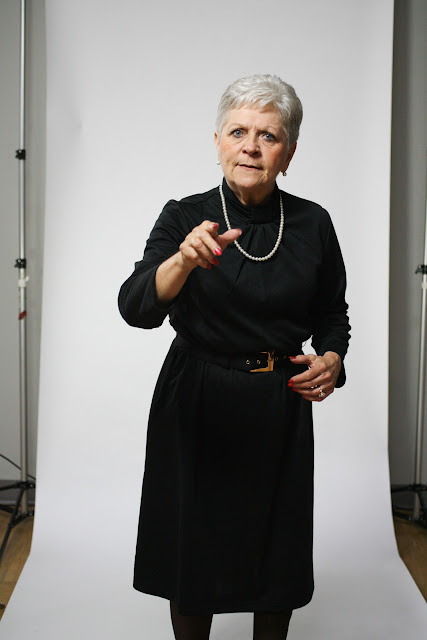 Regular readers will know that I am the "official" photographer for Zachary Scott Theatre, here in Austin, Texas.  I was reminded today of why I like doing photography there so much.  They have great actors and the actors can make great faces.  And I get to capture those great faces and show them to the world.  It's a wonderful collaboration that makes me painfully aware that "out there" in the "real world" our sitters are generally nervous, self conscious and reticent to do anything that might make them look....."creative."  In the theatre we work toward "creative."
The other reason I like working with the folks over at Zach is that the whole environment is one that's open to experimentation and "edge." To art as process and process as art.
Next month they start a new run of August: Osage County.  I don't know much more about the play than anyone else.  I know it's being billed as "one bitch of a family reunion" and that most of the characters have their share of social and mental dysfunctions.  That's about it.
The marketing people for the theater are going to collage all thirteen characters together for the advertisings materials and our job for this morning was to shoot each person in character against a light background so that they would be easy to select in Photoshop CS5.  Two years ago I would have meticulously lit the background a solid white to make the drop out easier by the new selection tool (with refine edge) in CS5 is soooo good I don't need to worry about a little tone in the background areas.  And if I use the images without dropping out the background I find I like the image better. 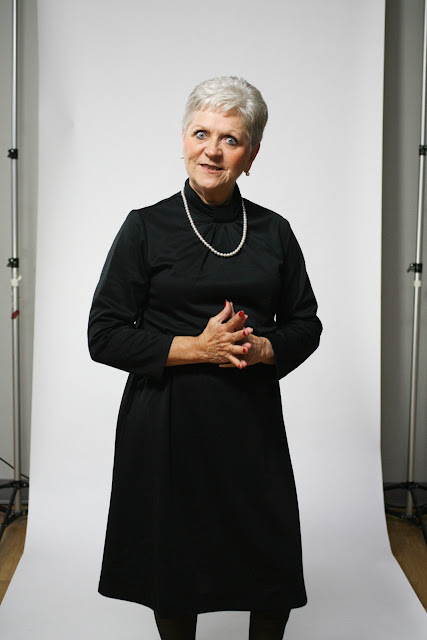 As it is Saturday I went to swim practice first and then headed over to the theater's giant rehearsal studio a little after 10am.  Even though I stuck the LED book manuscript in Fed Ex yesterday I was still excited to use the LED panels for the shoot today.  Something about tossing them on stands and covering them with a gauzy layer of diffusion then plowing right into the shooting really appeals to me.  The big panel (1000 LEDs) works so well as a main light.  Almost as soft as a beauty dish and harder than a small softbox, it has a certain authority I've come to enjoy and it's a look I don't get easily with flash. 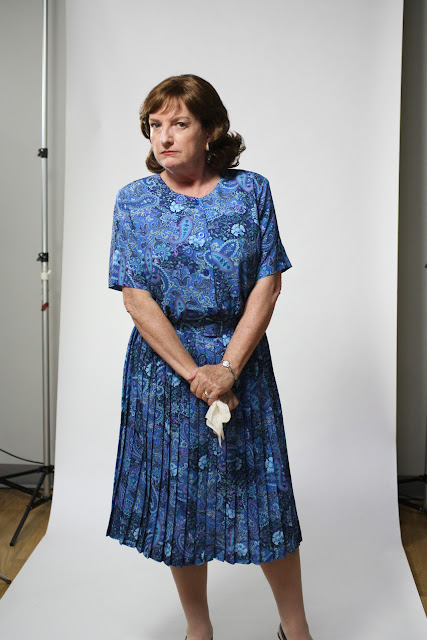 Here's the basic lighting set up:   One 1000 LED panel with a thin layer of diffusion positioned so that the bottom edge is at the subject's chin level.  Just to the left of camera and about five feet from the subject.  I placed a 500 LED panel back near the plane of the seamless background facing back toward the subject.  I would use one of the other but usually not both depending on which side of the collage the person would appear.  I wanted that "rear lit" highlight for a change.  The ambient light levels were fairly high in the space so I didn't need to add any fill to get what I wanted. 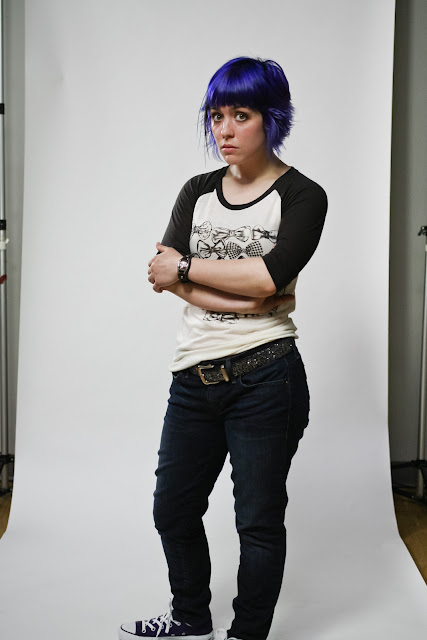 The final addition was a little 160 LED battery driven panel on one side of the seamless paper, just behind the subject's plane, kicking some extra "clean up" light on the background.   The direct and I ran the actors thru their different emotional affects and we shot a ton of frames.  Our final tally was close to 1200 and the whole shoot lasted about and hour and a half. 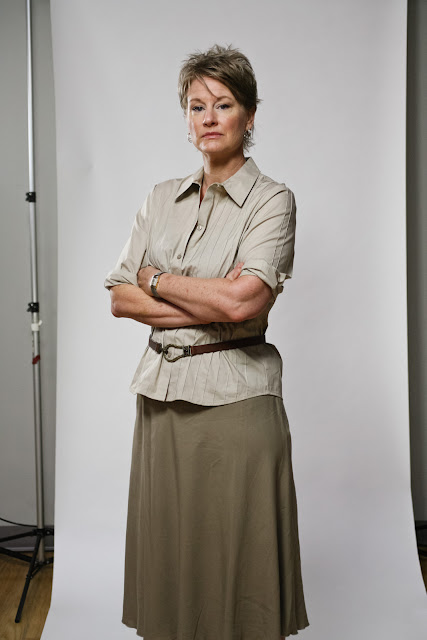 No filtration over  the lights and they were still a really nice match for the cool daylight that came fluttering down from the ceiling skylights, two stories up.  What did I learn?  Nothing.  I re-visited the idea that I love continuous light because the actors don't "play" to the flash.  There's nothing to cue them besides direction from the creative staff.  And, in my usual contrarian manner,  I used the Canon 1dmk2n instead of one of the newer, higher pixel count cameras  like the 7D, or the 5Dmk2. 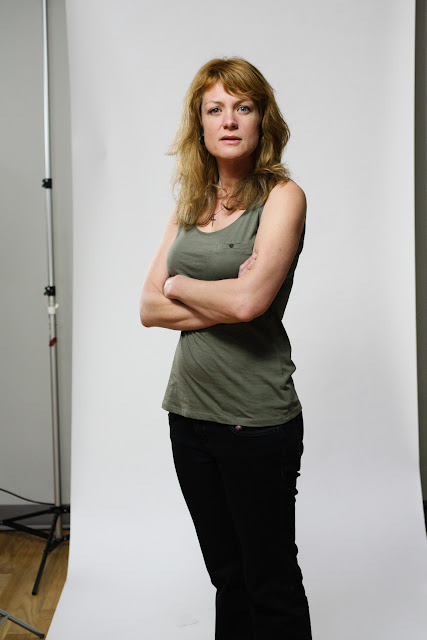 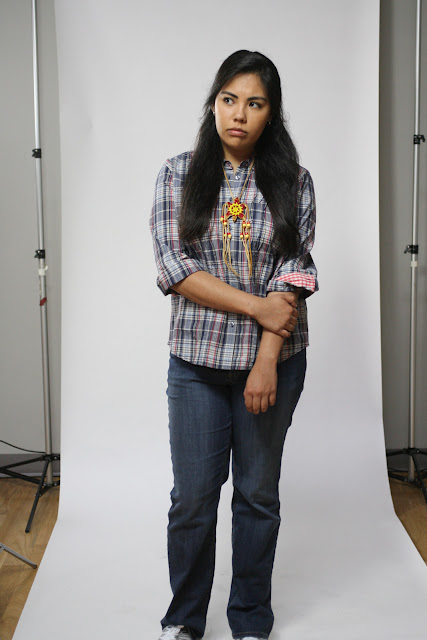 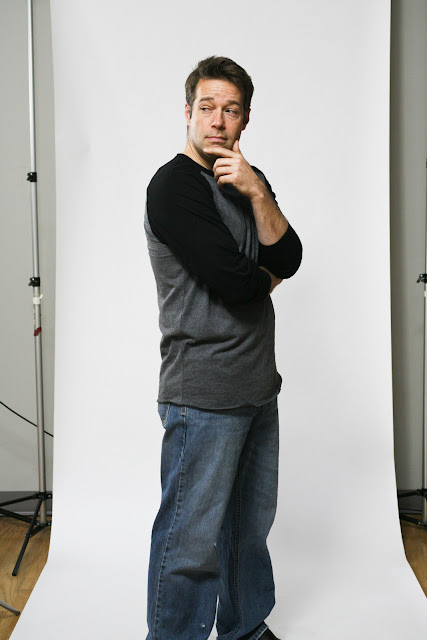 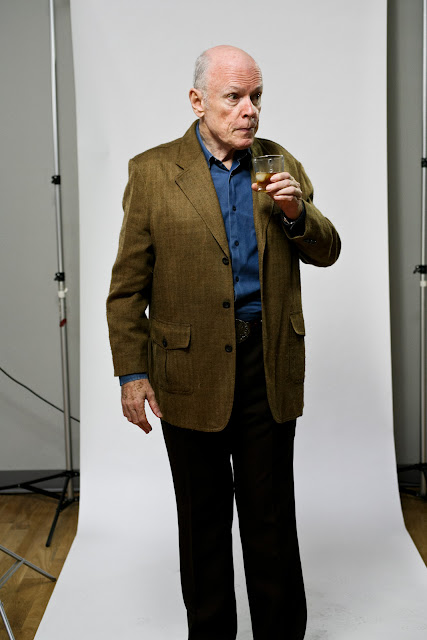 The shot just above is my favorite.  It shows off the effect of the light falling off as it cascades down from head to toe.  His face is well lit and by the time our eyes get half way down the frame the exposure on his coat pockets is a stop and a half, or two stops down.  And I love it.  I also love the idea of cocktails..... 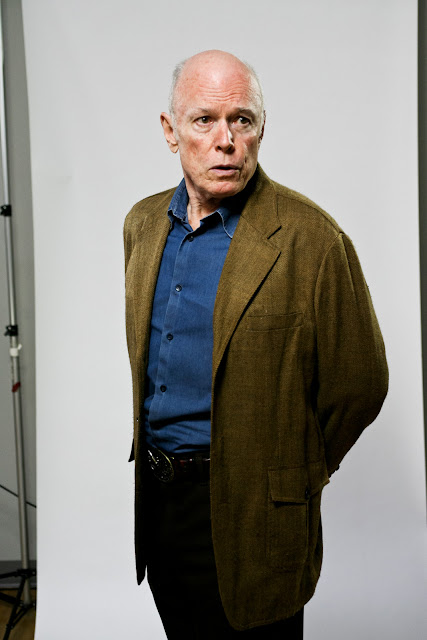 While I have a bunch of cool lenses sitting in various toolkits in the studio, for some reason I'm having a brief infatuation with the Canon 50mm macro lens.  Yes, the cheap f2.5 version with the "noisy" focusing motor.  It's sharp, impressively well behaved and very sharp at f3.5 or f4.  My exposures on this shoot were approximately this:  ISO 800,  1/200th of a second,  f3.5/4.
After "meeting" the characters I can hardly wait for the running shoot (dress rehearsal) in a week and a half.
Buy some tickets.  Come out and see some live theater.  I can pretty much guarantee that it's better than just about anything you'll see on TV.....  And it's real 3-D!!!!!!  The 3-D effects are incredible.  It's just like you are sitting in the audience......
Why the older camera?  Why not? It focuses at least as fast as the 5Dmk2 or the 7D, the files are just the right size for most of our marketing uses and it just feels so sexy in my hands.
Posted by Kirk, Photographer/Writer at 17:13 7 comments: