My elastic analysis of "favorite" cameras and lenses. 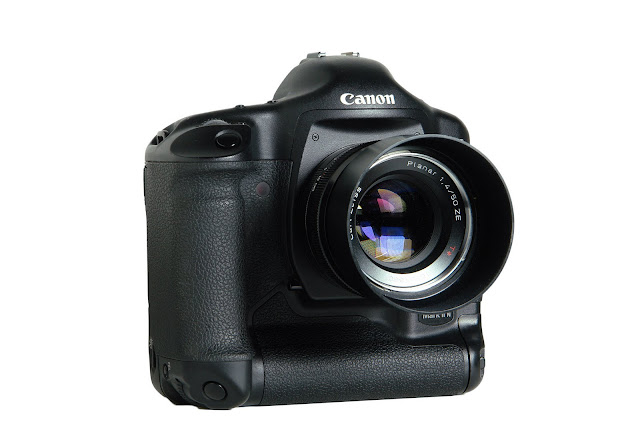 After I posted my Eeyore's Birthday blog I got several e-mails asking me why I wasn't using a better camera.  Each, in some way, presumed that I was using the best camera I could afford but were concerned that perhaps my budget wouldn't stretch to cover the cost of a "real", "modern" camera with "full capabilities."  I thought I'd explain why, for some months now, the Canon 1dmk2N has been my favorite camera.  My camera of choice.  The single camera I would choose from among those I own right now for one of those "lifetime on a desert island" questions.
First I should declare that I can afford other cameras and that I do own various other Canons, including:  a 5Dmk2

(which I press into service when shooting very wide angle images or images that require extreme enlargement.) a 7D

.  The last two are really more like production video cameras to me although their image files (especially around ISO 200) are very, very, very good.  But at equivalent sizes (up to the uninterpolated limit) the 1dmk2N is very much up to the same level of imaging performance.  But really, in my mind, that's not even part of the equation.
So why am I so smitten with this big, clunky camera from the mid-decade?   Let me count the ways.  But first let me say that there are two things I've added that make this camera more fun to shoot than a stock version.  I added a split image rangefinder screen that makes manually focusing easy and fun.  I bought an aftermarket battery that never runs down.  Really.  I swear it's got a small arc reactor inside.  I'm getting up to several thousand frames from a charge.
Here are the reasons I like shooting with this camera:
1.  The heft of the camera adds inertia which means that "an object at rest tends to stay at rest....etc."  A solid, heavy camera dampens user vibration well and that's a plus for those of us who like to shoot with manual focus lenses.  That's because I haven't come across any MF lenses that have IS (or VR).  I guess I could be shooting with Sony's a900

but that's a whole other story.
2.  The finder is very nice to look thru and makes it a pleasure to focus manually.  At least as good as the Canon 5Dmk2 with the upgraded screen and better with wide angle lenses.  Sexy finder.  Luscious.
3.  It focuses better than the other cameras.  Maybe even better than the 7D, which is supposed to be good at focusing.  The 1Dmk2 focus isn't complicated to use in AF and I've never had problems getting sharp focus in the plane I wanted it to fall in.  Doesn't really matter for the most part as this is the camera I tend to use with the manual focus Zeiss ZE lenses.
Take a look at the close-up view of the back: 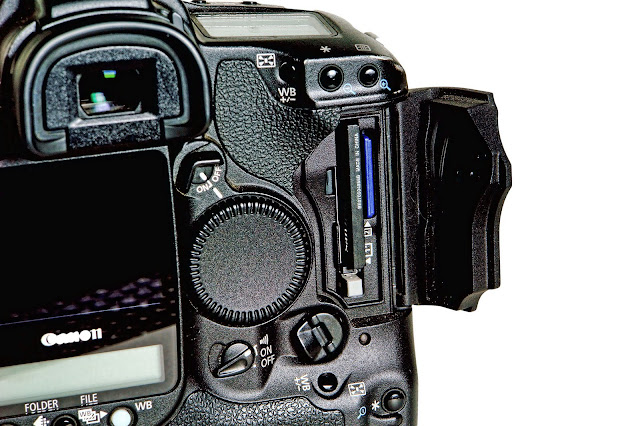 That's where two more reasons reside.
4.  See the open card door?  There are two card slots.  One is CF and the other is SD.  And the SD slot does SDHC.  That means I can put a 16 gigabyte card in each bay and have the capacity to shoot over 2800 raw files.  Without reloading.  That's cool.  And in my studio we buy both kinds of cameras:  those with CF and those with SD slots.  So I always have both at hand.  I call it planned "un-obsolescence."  And lately I've been buying  SD cards to shoot video on.  Recent Amazon purchase was three 8 gigabyte cards

at $12 each.  24 gigs of fast storage for a whopping $36.  Hmmmm.  Sounds good to me.
5.  See the contoured grip to the left of the card slots and just above the big wheel?  This camera body was designed to be comfortable in your hand.  And when you have it in your hand for four or five hours that makes all the difference in the world.  Canon makes pro cameras for people with normal hands, Nikon makes pro cameras for people with gorilla hands.  If you have big hands seek out a D3 instead.... 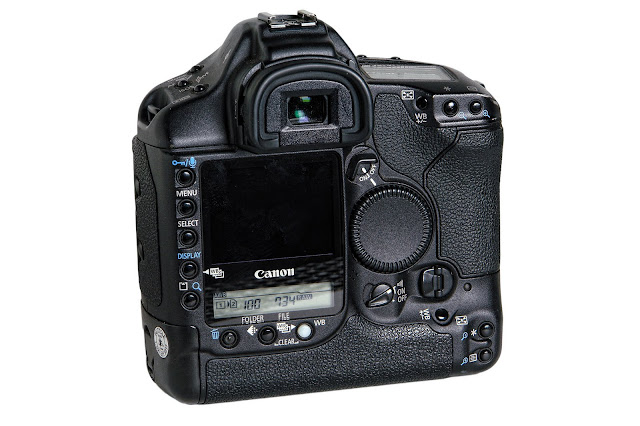 6.  The screen is pretty good for such old technology.  I can almost accurately judge a shot from the screen unless I'm in full sun.  Then all bets are off.

7.  While my other three, newer Canons brag bigger numbers of pixels I'm not convinced that it makes too much difference for 90% of what most people shoot.  Great to have on client jobs but on jobs where I have only myself to please I find that the eight megapixels of the 1d2 are great.  And each pixel is twice as big as the ones in the 7 and the 60.  It's a different feel and a different equation when it comes to optical diffraction.  But the neatest thing about having just enough pixels is that post processing becomes a quick pleasure rather than a time consuming chore.

The back story is that I always wanted to play with the one series cameras.  I'd like to own the 1dmk4

but I'd hate to pay for it during a down cycle.  Right now everyone is sold out of the current body because they came from plants in the hardest hit area of Japan.  I couldn't buy a new one today if I wanted one and had money burning a hole in my pocket.

One day I walked into Precision Camera and scanned the used shelves.  They test and guarantee the used gear they sell.....  I saw this clean 1D2N and an equally clean 1d2 original.  But there was a problem.  I wanted the N version for the screen but it came sans battery.  The older version came with the charger and two batteries.  I bargained and bargained and walked out with both cameras (and the charger) for right around $1,000 or about $500 per camera.  My rationale was that I'd sell off the older camera and have a fun toy for a low price.  Then I shot the cameras.  And then I fell in love.  Didn't sell the older one either.  I'm rationalizing but I'd like to take them as a pair on my next road trip-shooting adventure.  They'd make a nice set.

My decisions about cameras are rarely logical.  If they were I'd still be shooting with a Nikon D700

.  The files from that camera were great and I'd made my peace with it's handling.  But like the Canon 5d2

I never liked the feel or the sound of the shutter.  See what I mean? Totally irrational.  Seems not to make sense to shoot with an eight megapixel camera when I already own two 18 megapixel and one 21 megapixel cameras but there it is.  It all comes down to the feel and the fit for me.  I can always seem to tolerate smaller files better than bad or sloppy handling.  And I know that sentiment will be different from person to person.

all the photographers I knew saw the 8 megapixel cameras as the holy grail.  We said we'd stop there because that was all we'd need.  And I'm right there right now.  For most stuff.

The only thing I miss when I pick up these two classics and head out the door is the potential to shoot video.  And that's okay because it constrains me to always make fewer choices.  And, as I'm sure you know, more choices is hardly ever a good way to go.

Finally,  why the 50mm Zeiss ZE

?  Two things.  I love to focus manually.  The focus stays where you put it.  And secondly,  It just looks better than the Canon normal lenses from 2.8 to 11.  And that's where I tend to shoot.  All personal choices.  I have my eyes peeled for a 1dmk3.  Besides the AF issues I've heard the image quality is superb........and they're going for a song.
Posted by Kirk, Photographer/Writer at 18:47 22 comments: