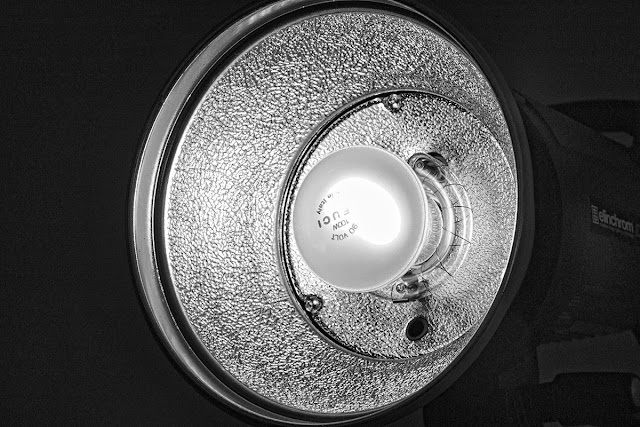 The last time I wrote to you about lights I'd just dumped a two decade accumulation of Profoto lighting equipment and ventured toward the cheap side of the lighting universe.  I started out with one Elinchrom D-Lite-4 IT monolight

and I decided that I liked it.  Pretty well.  It took a while to get used to handling a lighter and less robust lighting machine but the upside was the novelty and the digital controls on the back.

On friday I did my first corporate portrait with three of the D-Lites.  I used one as a main light in a 28 inch Fotodiox Beauty Dish

, covered with a diffusion "sock" and feathered quite a bit.  I used a second light into a 60 inch Photek Softlighter

with it's diffusion cover and, I used a third light with a couple layers of diffusion over an 8 inch, 50 degree reflector as a background light.

I had all the modeling lights on full and things were zipping along well.  I was shooting quickly and banged off about 35 frames over the course of five minutes.  That's when the fan came on in the fill light/Photek box.  A few minutes later the fan came on in the beauty dish assemblage.  All the lights kept banging away until we finished frame #110.  Then I was done.  The fans ran for a minute or so more and then stopped.  I looked at the frames on my monitor.  Even though I was shooting quickly I got into the pattern of waiting for the recycle "beep" to sound before shooting each frame.  The frames on the monitor were absolutely consistent.

The optical slaves worked fine on the two flashes not connected to the sync cord.

I'm using them again on Monday to make portraits of fourteen people at a medical practice here in Austin. I'll have them up and running for the better part of the day.  That's about it.
Posted by Kirk, Photographer/Writer at 11:19 5 comments: