Pro goes amateur for the day. Just another dad with a camera... 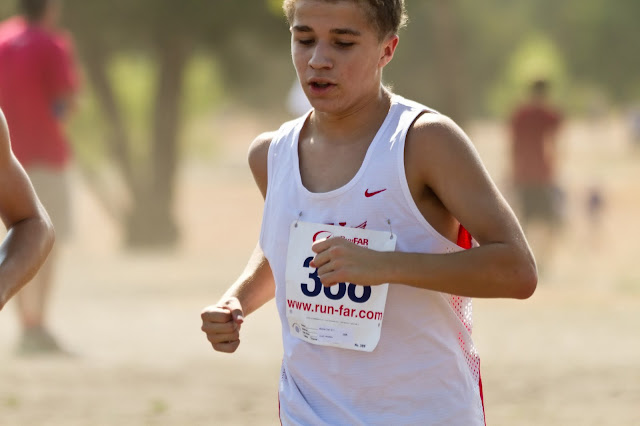 I was worried about Ben this morning but it turns out I didn't need to be.  But isn't that what worry is all about?  You pay the price now for something you may never get...  Anyway, I was worried because he abandoned swimming this year to take up cross country running.  He started at the beginning of the Summer and as you may have heard this is the hottest Summer in history in Austin, Texas.  How hot is it?  Well tomorrow the meteorologists are predicting 110(f).  And it isn't like the dry, refreshing heat of the desert; the air today was laced with moisture creating an atmospheric soup that saps your energy and your will to live.  I was worried because Ben was competing in his first cross country meet.  Today's distance was three miles and by the time his heat started running at 11:00 am the thermometer had already crept over 90.
The meet was an invitational with tons of high school kids from five or six local high schools.  It was held out at the Decker Lake Park in far east Austin. The park is famous for it's lack of trees, lack of water fountains and lack of amenities.  But they have a decent long loop course.  Two laps makes three miles.
I got Ben up at 6:15 this morning and fed him scrambled eggs and whole wheat toast.  Normally he has only a teaspoon of honey before an early morning run but we knew he wouldn't be running until after 10:30 and a bit of protein would keep him from bonking during the race....or before.
I dropped him off at the school at 6:45 because the team all goes together on the bus.  That's non-negotiable in his coach's eyes. 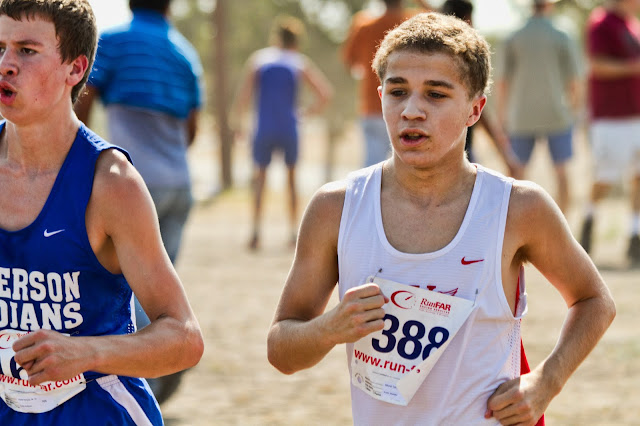 Then I clicked into the "dad mode" and started thinking about what camera to bring to photograph the boy with.  I decided on the Canon 7D and the 70-300 IS lens (the latest version).  A lot of reach, great image stabilization and half the weight of my 70-200L.  I figured I'd go light and blend in with the other dads and moms who would, no doubt, be clicking away.  I set the ISO to 320, the aperture to 5.6 and let the camera meter lead me by the hand.  I used the 1/2 size raw file setting and I used servo AF set to the center, large group.
Nothing else photographic in my pockets or over other shoulders.  And that worked out well because you need to go from the starting area to the middle of the race to the finish a couple of times to get all the photos you want and if your kid is fast that means you have to move fast to effect the rendezvous.  Can't imagine doing that while porting around extra bodies, lenses and bags.
It's easier to photograph swim meets because everything is confined into the boundaries of a 25 yard or 50 meter pool.  Find the side with the good light and you can spend a few hours shooting without much distraction.  Distance running is different.  It's a lot more acreage.  And you have to move to come home with stuff to send to the grandparents..... 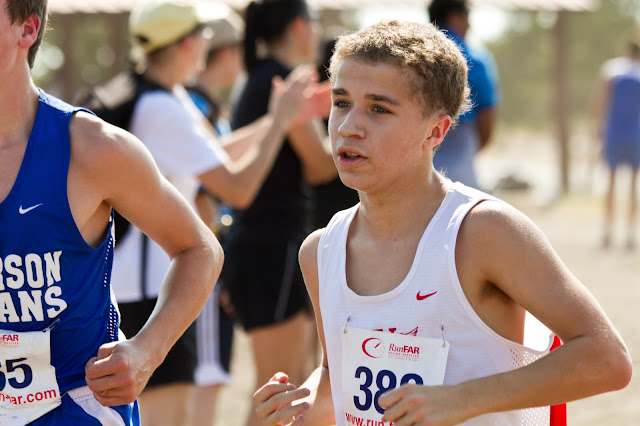 So Ben did really well and finished ahead of the middle of the pack.  Not bad for a first go.  I did okay with ten or fifteen decent shots.  It was odd for me in a few ways.  The last time I shot a distance running race I was freelancing for the people who hold the Capitol 10K.  There were 20,000 participants and they ran the race on closed, public streets.  Not only did I have endless press credentials I also rode in the truck that led the race and gave me a platform from which to shoot stuff from a primo perspective.  This morning the guys started with their backs to the sun and finished with their backs to the sun.  Back lit was the name of the game.  But being a dad and not a professional photographer you take what they deal you and stand where they tell you.  But next time.....I'll scout that course in advance, get them to 180 the start and the finish,  maybe bring some big lights for fill......Naw.  I think I'll stay with this plan and just enjoy the whole process.  Seems like the right thing to do.
I think over photographing your kid's sport stuff, festooned with tools of the trade (three camera bodies a bunch of lenses, some Profoto battery systems, compass and reflectors), might be just as embarrassing to your high school boy as showing up with a banner that says, "Go Fast Sweatheart!!!!  Mommy and Daddy Love You."  That's always something to keep in mind when they start growing up. 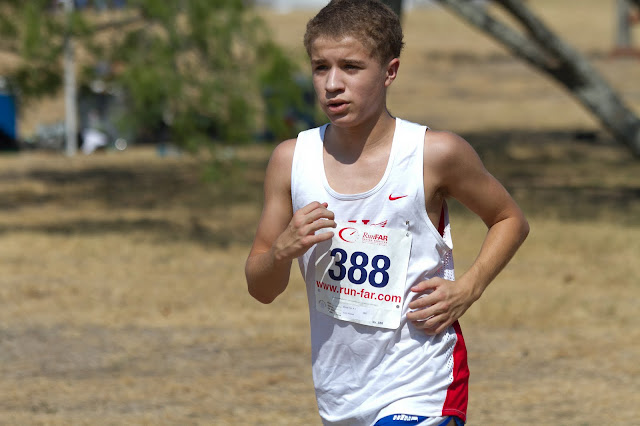 After a few hours at Decker Lake, in the heat, I think I chose wisely.  The pool is the place to be.  At least until the first frosty day.  But right now that seems a long way off.

Final observation:  Before I left the house for the meet today I read in the paper about America's obesity epidemic.  Seems that we're on a curve to have 50% of the population really, really fat in the next few years.  If that worries you come out and see the kids at a cross country meet.  They're putting in 6 to 8 miles a morning on the week days and doing much longer runs on the weekends.  No fat kids here.  They all look pretty much like Ben.  Lean and moving.  Come to think of it we don't have any overweight people in the master swim team either.  Oh my gosh.  I think I've found the cure to obesity!!!!  Move.  And then move more.

What does this have to do with photography?  Come scamper up an embankment with me sometime in the middle of the Austin Summer, with a full camera bag and a couple of sandbags and we'll talk about the photographic benefits of staying in good shape.  Can't take the photo if you can't get in position.....
Posted by Kirk, Photographer/Writer at 17:41 18 comments: