Minimalism as mainstream? Small cameras the new pro cameras? Is the world out of control, or just catching up? 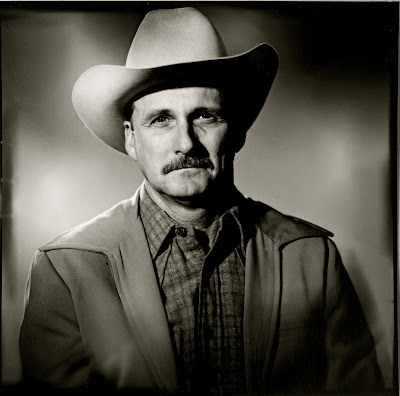 Actor as rancher from a theater shoot.  It was an interesting time of experimentation for me.  I used mostly small fresnel spotlights to create shots like this.  Our exposures were down in the 1/4 to 1/30th second range so people had to stay still.  But the tradeoff for a bit more care was a lot more control...Camera: Hasselblad 501 c/m.  Lens:  150 Sonnar.  Film:  Tri-X.  Lights:  Desisti hot lights. 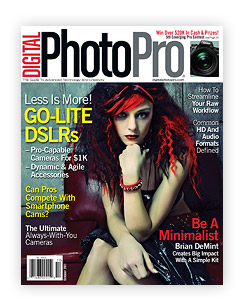 So I was at Holland Photo Lab on South Lamar Blvd. this morning.  I'd come via a circuitous route since the city of Austin has closed off most of the streets I normally navigate to have some sort of "rock" concert in the park for the next three days....  I dropped off my three rolls of Velvia 100f (a whopping 36 exposures, total) from my roadway project and I was waiting for someone to log in my film when this magazine caught my eye.  "Be A Minimalist."  the cover demands.
There are several articles in the magazine that gush about the move to use more "minimalist" gear in your lighting and shooting.  There's a breathless article about a shooter in Joplin who uses only an entry level DSLR with a kit lens and a couple of clamp lights from Walmart.  That's one of his shots on the cover (above).  Sometimes he even uses.......available light!!!!  Further into the guts of the magazine is a long "technical" article that explains how shooting with cameras aimed at rank amateurs can "make sense" for professional photographers.  It shows a chart with all sorts of entry level cameras including two I felt were odd choices, both because of price and also the capabilities of these weather proof and well regarded bodies.  Those were the Canon 7D and the Nikon D300s.  Seems not every photographer covers sports and needs superfast response and (AMAZING) not every professional photographer shoots in harsh environmental conditions that would require weather sealed cameras.
Read more »
Posted by Kirk, Photographer/Writer at 13:02 6 comments: