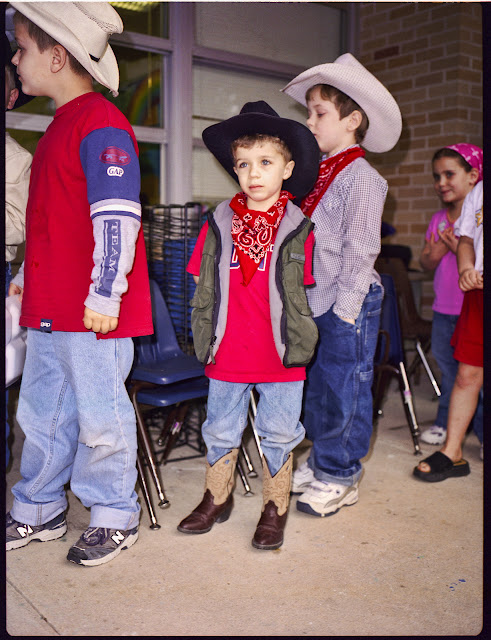 
I don't know how y'all New Yorkers or Californians do it but in Texas we photograph big and wild.  In fact, that's how we do ever'thing here in the Lone Star State. This image is from a required class that all Texas children must take.  It teaches them to dress like Texans, talk or drawl like Texans, and to boast like Texans. Ben was already claiming to have created more new jobs in his neighborhood than any other kid in his class.....even back then.  Ben ruined the curve on the mandatory test at the end of the class.  Not because he's smart but because he had the right footwear and the right "looking across the prairie" gaze.  He also addressed everyone as "Ma'am."  Even Jonathon, the gardener.

I tried good to learn him about photography but he did that "far away, across the prairie" look and told me, "Sorry papa, but it just ain't man's work."  I understood.  After all,  I grew up in Texas and I know in what "special" esteem we, as a state, value the arts.  And math and science, too.  (number tricks of Satan.)

If he keeps his grades down and don't learn too much about science or (dang useless) art or about DANG foreign countries, or economics or any of that other useless book learning, we can just about hope he could be our Governor some day.  Maybe even president.  He's already got the swagger.....

But that picture above is about eleven years old and no matter how much, over the last ten years, I tried to Texa-fy him his mother kept stepping in to "book learn" him.  Well,  at least I have this photograph to commemorate a time when he was on the true path to being a good Texan.  We did have one little episode recently.  He was careless and broke a camera.  I lost my temper and yelled at him.  I said, "Be careful! you little buckeroo.  Them cameras don't just creation-ize themselves out of thin air!!!"  He looked at me in a resigned way and backed out of the studio.

Hope y'all 're having fun.  Howdy from Rick Perry's home state!